President Trump, America’s top drama queen, did everything he could to infuse his second Supreme Court nomination with ratings-grabbing suspense and pageantry. But for queer Americans, there was only one question to be answered in Monday’s prime-time selection spectacle: Are we definitely screwed, or probably screwed?

Justice Anthony Kennedy, whose retirement created the opening, was as conservative as they come – with a few grand exceptions, none grander than LGBT rights. Kennedy was not only the “decider” in some 5-4 rulings, tipping the scales toward equality, but the author of every landmark gay-rights decision in American history. His eloquent rationales for overturning bans on “sodomy” (Lawrence v. Texas) and legalizing same-sex marriage (Obergefell v. Hodges) made him the closest thing to a Thurgood Marshall that LGBT Americans have ever had. But as New Yorker legal analyst Jeffrey Toobin glumly noted upon Kennedy’s resignation, his legacy is anything but set in stone. “The Constitution grants only those rights that the Supreme Court says it grants,” which means the “new majority can and will bestow those rights, and take them away, in chilling new ways.”

Why Queerbaiting Matters More Than Ever

How Brandan Robertson, a.k.a. the 'Tik-Tok Preacher,' Is Taking on the Anti-LGBTQ Teachings of His Faith

The judge Trump tapped to replace Kennedy could have spelled certain doom for queer rights. But his pick, Brett Kavanaugh, has a thin record on the subject – no consequential decisions in his time on the D.C. Court of Appeals, and no blurting anti-gay sentiments in public. Unlike his fellow-right wing Catholic contender, the notorious Judge Amy Coney Barrett, there’s at least a little mystery to how hostile Kavanaugh will be to women’s rights and minority rights. But that’s cold comfort indeed. Kavanaugh, like Barrett, champions “religious liberty” – i.e., the rights of conservative Christians to discriminate. We don’t know for sure that Kavanaugh would be a certain vote to overturn same-sex marriage. But we do know that he’ll be siding enthusiastically with Christian cake-bakers and their ilk, joining a majority that’s poised to chip away at the rights queer folk have only just begun to win. 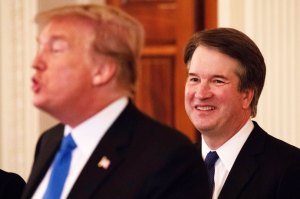 Kennedy’s retirement came as a rude shock for a lot of my queer compatriots – a sudden and ugly reminder that no matter how much we’ve changed public opinion in our favor (67 percent of Americans now support same-sex marriage), our legal rights hang by a thread. Worst-case scenarios abound: marriage licenses turning into empty pieces of paper, “LBGT” stripped from hate-crime and anti-discrimination ordinances, queer folk being stuffed en masse back into their metaphorical closets. “Bitch, we are fucked,” an old fuck buddy told me after Kennedy’s announcement, and it’s an understandable sentiment. After all that, we have to fight for our basic dignity again? So soon?

It’s not that we don’t believe we have the tools or the wherewithal to fight back, now that Trump’s reality-show authoritarianism has targeted us along with Latinos and Muslims and disabled people and immigrants and Puerto Ricans and women and FBI personnel. We queers just finished racking up the fastest and most emphatic civil-rights breakthroughs of any American minority in history, after all. We are a movement that used a terrifying health crisis, of all things, to turn itself into a civil-rights juggernaut. Kavanaugh and the new right-wing majority can reverse Kennedy’s decisions – and probably will – but there is one thing they cannot do: Reverse history. We have a fight on our hands for sure. But we are not headed back to the dark ages.

I know that from hard-won experience, because I grew up in those dark ages. If you are queer and American and in your 50s, you have lived through an entire social history – a weird and rare thing. Imagine someone born into slavery who could remember both the Emancipation Proclamation and the signing of the Voting Rights Act. It took nearly as long for women to get from Seneca Falls to Roe – but just 46 years for queers to advance from Stonewall (which broke out in 1969, not long after I was born) to Obergefell. Geezers like me can still taste and feel what it was like to grow up knowing you were something unspeakable.

In my case, in a working-class Southern Methodist household in the ‘70s, it was hard to even know what that something might be: You might see some flashes of gay protesters or parade-goers in San Francisco on the evening news, before your mama insisted on somebody changing the channel “right this minute!” You might hear some vague misinformation in a junior-high health class, or read lurid accounts of gay male “perversion” in a best-selling book like Everything You Always Wanted to Know About Sex* (But Were Afraid to Ask) – which painted a vivid portrait of “vile” homosexuals in the grip of self-destructive sex addictions. (“One of the main features of homosexuality is promiscuity,” my 12-year-old self learned. “The homosexual must constantly search for the one man, the one penis, the one experience, that will satisfy him. Tragically there is no possibility of satisfaction because the formula is wrong.”)

Like other queer men of my vintage, I then came of sexual age in the 1980s, at the same time AIDS made exploring one’s sexuality a potential act of suicide. We weren’t invisible by then; we were dangerous, cursed by God, causers of natural disasters. Quite serious discussions were had in public about quarantining all gay men. Welcome to adulthood! You’re just in time to see your sexual desires become a death sentence!

These are not the kinds of formative experiences a person can expect to fade and blur with time. The sharp edges still jab at me, at us. I know what it’s like to be genuinely scared of being gay. Scared that it dooms you to a life of unhappy straight-acting marriage, or (the only alternative) temporary gratification followed by social ostracization and eternal Hell flames. Scared that having sex with another guy, or even kissing the dude, might actually kill you in flesh-and-blood, physical reality. Scared of being killed for somehow “looking gay” out on the street and “provoking” violence. That kind of scared.

Ever since the Lawrence decision began the avalanche of gay-rights breakthroughs that culminated with marriage equality, I’ve been the gloomy older dude at my younger gay friends’ parties, warning everybody, “It won’t always be easy – there will be a backlash coming. You have no clue how fragile all these victories are.”

Strange thing, though: The history I’ve lived through, by accident of birth, is now making me the optimist in the room. I have no clue whether Obergefell will actually be tossed aside in Kennedy’s wake. But I can say this, because I know it: A bunch of old straight farts in robes can do their worst, and so can Donald Trump. The right can whip up a new propaganda campaign drawing on some of the old favorites (“Homosexuals can’t reproduce, so they have to recruit” – Anita Bryant, 1977). They can come and try to tell my old friends M.J. and Beth Ann, who’ve hung together for three decades despite the fact they are both impossible human beings, that their marriage doesn’t count anymore. Or, better yet, they can amass their forces on social media and start trying to convince my 20- and 30-something queer sisters and brothers that they’re going to have to readjust their expectations and accept third-class citizenship. It’s one thing to deny rights to those who, like queer people of yore, never had a taste of freedom. It’s another to strip freedom away from people who don’t just think they’re equal, but know it.

And so while my age does not make me an eminently dateable gay man, it does give me a little bit of perspective that I’m clinging to right now. When I snapped out of the snit I was in when Justice Kennedy had the nerve to up and say he was retiring from the bench, I noticed something: For all our “fuuuuck” tweets and Instagram images of Five Horsemen in black robes, for all our howls of fury and our sighs of despair, not a single queer person I know (even in the social-media sense of “knowing”) was scared. Pissed, yes; who wouldn’t be? When three years after you became a more-or-less full-blown citizen of your own country, you suddenly face the reality of losing those rights, or many of them? But nobody is resigned. Nobody is going, “Oh, well, it was lovely to have human rights for a little while, anyway.”

Human nature hasn’t changed since I was growing up invisible in 1970s America. That’s the bad news. People will always grasp at any excuse, in the name of feeling securely superior about something in their lives, to openly disparage and dehumanize others. There was no reason to think that this nasty quirk of human nature would wither away, or no longer spur anti-gay bigotry, just because two-thirds of Americans now approved of that nice, neat, quiet couple down the block, doing their part to lift property values for the whole neighborhood – or because a handful of Supreme Court justices had decreed in 2015 that queer Americans deserve a measure of basic human dignity.

What has changed, and changed dramatically and indelibly, is how queer Americans feel about ourselves—and what we expect for ourselves. The homophobes used to talk about homosexuality as if it were an easily spread contagion in itself – so magically appealing, it seemed, that once you let it run free in one part of the country, it would soon catch on everywhere. That wasn’t true about the sex itself, as it turned out, but it was true when it came to gay people themselves. Once we were out, we spread. Good luck reining us back in, bitches.