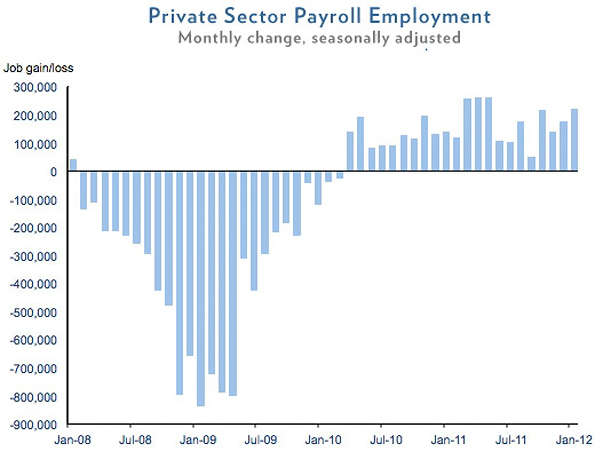 Today’s employment report – 243,000 positions added, 50,000 in manufacturing; unemployment down to 8.3 percent, the lowest in three years – shows that we’re seeing some steady improvement in the thing people care most about: JOBS.

Not banks, not interest rates, not deficits – but jobs, paychecks, unemployment … stuff like that.

We’re not out of the woods by a long shot, and I’ll list the caveats below, the scariest of which is that Congress could screw this up.  But first dessert, then spinach.

• Employment was up 243,000 last month.  There’s always bips and bops in the monthly numbers, so it’s good to average over several months.  Over the last three months, the average rate of job growth has been 200,000, compared to about half that if you go back a bit further.

• The unemployment rate fell to 8.3 percent, its lowest level in three years.  And yes, you’re right: You don’t pop champagne corks with 12.8 million unemployed and millions more underemployed.  But there’s no question that the trend is our friend here.

• Job growth was robust across most industries.  If that continues, it’s a sign that the recovery is becoming more broad based and therefore more stable and lasting.

• Long-term unemployment is still historically very high, over 40 percent.  That means that more than five million of America’s unemployed have been out of work for at least six months.

• 243,000 sounds like a lot of jobs to add in a single month, but historically, it’s not been at all unusual to see much larger monthly gains coming out of such a deep downturn as the Great Recession.

• Weekly earnings are up 2.5 percent over the past year.  That’s still behind the rate of inflation, which has been running at around 3 percent, meaning prices are still growing faster than people’s paychecks.

• We’ve been here before.  Friendly trends can be obliterated by bad shocks—Europe, oil, and especially what economists call “fiscal drag” – austerity or anti-stimulus policies, like cutting spending or failing to renew extended UI benefits, which dampen growth rather than boost it – are still very real downside threats.

On that last point, as I wrote on my blog yesterday, this  — 9 percent — is your unemployment rate under fiscal drag.  There’s little reason to expect Congress will add a fiscal boost to the recovering job market — by, say, implementing parts of the American Jobs Act; thanks to GOP opposition, even relatively straightforward measures like extending the payroll tax cut and UI benefits is proving – alas, predictably – to be a heavy lift.

Also by Jared Bernstein
• The Economy: What’s Wrong and How to Fix It
• Steps Toward a Fairer Economy
• What Obama’s State of the Union Got Right