What Mitt Romney Learned From His Dad - Rolling Stone
× 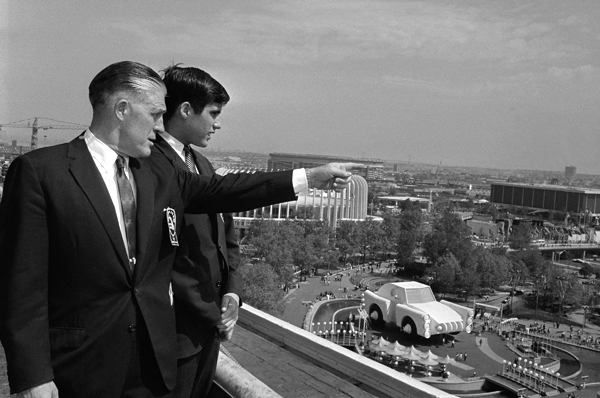 Here is a truism about the psychology of politicians: there is almost nothing so soul-definingly traumatic for them as losing an election. You believe yourself a great man, a figure of destiny.  You love your job, or covet an even more important one—and then suddenly one day it’s gone, all because the public decides it doesn’t love you any more. The trauma shapes future ideology: if you’re a conservative, say, you might become more conservative. That was the case for two pioneers of the Democratic Party’s long march to the right: Joseph Lieberman, who lost a bid for the U.S. House of Representatives, and Bill Clinton, who lost his reelection as Arkansas governor, both in 1980, a year of profound reckoning for Democrats who got blindsided by Ronald Reagan and his coattails.

I say there is almost nothing as traumatic for a politician than losing an election. Here’s what might be even worse: You are an aspiring office-holder, a young and handsome and ambitious man on the rise, and your father loses an election. Dad is your hero, and then the world’s goat; you start rethinking your vision of how the world works. Consider a third pioneering Democratic corporate sellout, Evan Bayh, who managed the 1980 Senate reelection campaign in which his fighting liberal father Birch Bayh lost to baby Reaganite Dan Quayle. Thereafter, as governor and senator from Indiana between 1989 and 1997, the son hardly met a right-wing idea he couldn’t embrace.

In my first weekly online column for Rolling Stone, I’m here to write about another loser and son: George and Mitt Romney – both almost-certain Republican presidential nominees. Pollster Lou Harris said late in 1966 that George Romney, then governor of Michigan, “stands a better chance of winning the White House than any Republican since Dwight D. Eisenhower.” Then, just over a year later, he was humiliated with a suddenness and intensity unprecedented in modern American political history (of which more below). His son was 19 years old. What makes Mitt – né Willard – Romney, run? Much, I think, can be understood via that specific trauma.

I wrote a Los Angeles Times op-ed four years ago, just before Romney dropped out of the 2008 race, arguing that he would “go down as the most robotic big-ticket presidential candidate in history.” I chalked it up to psychobiography: Even more than most kids, Mitt couldn’t help but view his dad as a messiah – because much of America did, too. George Romney’s first appearance on the cover of Time, in 1959, came just before Mitt’s twelfth birthday. As CEO of the Americans Motors Corporation, he had single-handedly set Detroit on its ear by calling its products “gas-guzzling dinosaurs.” The first full biography of him came out in 1960. Soon after, he became Michigan’s James Madison, heroically leading a bipartisan effort to redraft the state’s messed-up constitution. By 1963, he was governor, a Republican in a Democratic state, a politician so beloved that John F. Kennedy was terrified at the thought of running against him in 1964. After his reelection in 1966, he ran 54-46 in a hypothetical 1968 match-up with Lyndon Johnson.

His calling card was his shocking authenticity; his courage in sticking to his positions without fear or favor was extraordinary. In January of 1964, for example, the second-year governor received a letter (downloadable here) from a member of the top Mormon governing body reminding him of the “teachings of the prophet Joseph Smith” that “the Lord had placed the curse upon the Negro.” Drop your support for the 1964 civil rights bill, the elder warned, arguing that God might literally strike Romney dead for his apostasy: “I just don’t think we can get around the Lord’s position in relation to the Negro without punishment for our acts,” the letter said. Romney only redoubled his commitment – leading a march the next year down the center of Detroit in solidarity with Martin Luther King’s martyrs for voting rights’ in Selma, Alabama. In 1966, the Republican Party staked its electoral fortunes on opposing open housing for blacks. Romney begged them, unsuccessfully, not to. “This fellow really means it,” an amazed Southern Republican said when Romney toured Dixie pushing civil rights in his presidential campaign; after America’s worst riot broke out in Detroit under his watch, the governor said that America could respond with a crackdown on law and order – “but our system would become little better than a police state.”

Then, most famously, there was the Vietnam War. He supported it after returning from a trip there in 1965. Then, courageously, after a second trip in 1967, he began to criticize it. On September 4, 1967, a TV interviewer asked, “Isn’t your position a bit inconsistent with what it was, and what do you propose we do now?”

The line everyone remembers from his response: “When I came back from Vietnam in 1965, I just had the greatest brainwashing anybody can get when you go over to Vietnam.” But he continued with a devastating, prophetic, and one-thousand-percent-correct assessment: that staying in Vietnam would be a disaster. The public, and certainly the pundits, weren’t ready to hear it. All they heard was the word “brainwashing” – not in the colloquial sense in which Romney obviously intended it, but as something literal. Here was this weird dude accusing our generals and diplomats of Svengali-like mind control. The mockery was swift and furious. (“I would have thought a light rinse would do,” William F. Buckley said – hilarious! Only an idiot would criticize the Vietnam War!) Romney nose-dived sixteen points in the next Harris poll. As I wrote in my book Nixonland, on Vietnam a national brainwashing continued apace.

The Mormon bishop, however, did not quit. Instead he leapfrogged across New Hampshire telling unseasonable truths – that LBJ was “spinning a web of delusion,” and that “when you want to win the hearts and minds of people, you don’t kill them and destroy their property. You don’t use bombers and tanks and napalm to save them.”

His opponent, meanwhile, running what you might call a robotic campaign, just bullshitted about Vietnam, hinting he had a secret plan to end it. The truth was a dull weapon to take into a knife fight with Richard Nixon – who kicked Romney’s ass with 79 percent of the vote. When people call his son the “Rombot,” think about that: Mitt learned at an impressionable age that in politics, authenticity kills. Heeding the lesson of his father’s fall, he became a virtual parody of an inauthentic politician. In 1994 he ran for senate to Ted Kennedy’s left on gay rights; as governor, of course, he installed the dreaded individual mandate into Massachusetts’ healthcare system. Then he raced to the right to run for president.

He’s still inauthentic – but with, I think, an exception. Every time he opens his mouth on the subject of capitalism, he says what he sincerely believes, which happens to fit neatly with present-day Republican ideology: that rich people deserve every penny they have, and if people complain about anything rich people do, it’s only because they’re envious. Comme ça:

That’s another rebellion against his late dad. Not only was George Romney, that loser, ironclad in his ideological commitments; his vision of how capitalism should work was in every particular the exact opposite of the one pushed by the vulture capitalist he sired. (If George Romney’s AMC was around now, Mitt Romney’s Bain Capital would probably be busy turning it into a carcass.) A critic once said he was “so dedicated to good works his entrance into politics is like sending a Salvation Army lass into the chorus at a burlesque house.” As a CEO he would give back part of his salary and bonus to the company when he thought they were too high. He offered a pioneering profit-sharing plan to his employees. Most strikingly, asked about the idea that “rugged individualism” was the key to America’s success, he snapped back, “It’s nothing but a political banner to cover up greed.” He was the poster child for the antiquated notion that corporations have multiple stakeholders: the workers that breathe them life, the communities in which they are situated, and the nation to whom they owe a patriotic obligation – most definitely and emphatically not just stockholders, as Mitt and his defenders say.

In the video above, today’s Romney insists there is no reason to question the distribution of wealth in America except for envy of the rich – did his rich dad question the distribution of wealth in America out of envy for the rich? – and that it was a subject only appropriate for discussion in “quiet rooms.” (His dad didn’t talk about it in quiet rooms; he talked about it at a Sunday worship service at the 1972 Republican convention, praying, “Help us to help those who need help.”) Even if Mitt Romney is not the most right-wing candidate for the nomination, when he wins it, in a Republican Party becoming more extreme with every passing day, he may still be – because the party won’t have it any other way – the most right-wing nominee in the history of the country.

It wasn’t that way at first, of course. Four years ago, Romney announced his presidential candidacy — anyone remember? — in front of a state-of-the-art hybrid car. Positioning himself as an ecology president, he boasted about his father – “The Rambler automobile he championed was the first American car designed and marketed for economy and mileage” – and pointed to the car next beside him as “the first giant step away from our reliance on the gasoline engine.”

Now, of course, he’s a global warming denier. Little Willard is all grown up now. He’s his own man. And he’s the the likely Republican nominee. Which now means he’s Wall Street’s man. And Focus on the Family’s, and the Tea Party’s, and Grover Norquist’s too.

Rick Perlstein is the author of Before the Storm: Barry Goldwater and the Unmaking of the American Consensus and Nixonland: The Rise of a President and the Fracturing of America.