The 'Extinction Rebellion' Wants You to Wake Up - Rolling Stone

At around 1 p.m. ET in Midtown Manhattan on Saturday, protest puppeteer Elliot Crown twirled a paper mache planet over a bed of flames, playing a silent violin. Around him, a neon-dotted crowd gathered next to the Plaza Hotel to protest the collapse of life on Earth. Numbers soon swelled to around 300, a solid local turnout for the Extinction Rebellion’s first national day of action in the United States. A marching band began to play, and activist performance group Reverend Billy and the Stop Shopping Choir hopped around the perimeter of the crowd, harmonizing about the end of the world. “Only so many beautiful days… are le-e-eft!”

It’s a bit unnerving to have one’s quietest and most urgent fears sung through a megaphone by a group of performers wearing giant orange toads strapped to their heads (commemorating the now-extinct Golden Toad), but therein, perhaps, lies the power of the Extinction Rebellion. The movement attracts people who want to fully grapple with the horrifying implications of scientific data about our climate, carrying the assumption that this will eventually appeal to a critical mass. The most recent IPCC report warned that CO2 emissions would have to plummet dramatically over the next 12 years in order to limit global warming to 1.5 degrees celsius, a push that would require “rapid, far-reaching and unprecedented changes in all aspects of society.” Even at our current 1 degree of warming, things are getting rather grim: an ongoing record-breaking heat wave in Australia, recent deadly fires across the Northern hemisphere, the reverberating astronomical death toll of Hurricane Maria, an “insect apocalypse,” mass migrations across the globe.

“The science is so bad that you don’t really have to know too much,” Gregory Schwedock, a New York-based Extinction Rebellion organizer, tells Rolling Stone. “Just having the broad picture is enough, because we are so far behind, we are so fucked.”

The Extinction Rebellion (or XR) is a grassroots direct action movement that kicked off in the UK in October 2018, gaining international attention and the backing of people like Naomi Klein, Noam Chomsky and Bill McKibben after thousands of protesters shut down five London bridges in a highly publicized act of civil disobedience. Since then, over 200 Extinction Rebellion outposts have emerged around the world. The IPCC report’s findings have spurred less legally-risky action, as well: the “Green New Deal” championed by the Sunrise Movement and Rep. Alexandria Ocasio-Cortez has become a must-endorse policy for progressive Democrats, tens of thousands of students inspired by 16-year-old activist Greta Thunberg have walked out of classrooms in Germany, Belgium, Switzerland, Australia and elsewhere over the past few weeks to protest climate inaction and 70,000 people marched in Brussels on Sunday.

After five weeks of rapidfire organizing, Saturday’s demonstration was slated to be part of the build-up to an international week of action in April, and a coming-out event, of sorts, for growing chapters in cities across the U.S.

“I think that people need to see other people putting themselves on the line as much as possible,” says Megan Marohn, 39, a teacher from Troy, New York, who’d come down to participate in “Rebellion Day 1.” “We’re in dire circumstances,” she adds, citing a recent New York Times report that oceans are heating up 40 percent faster than expected.

Or, as Leah Francis, a national XR organizer based in Portland, Oregon, put during a phone call, “We are all going to die, and we need to shout it from the rooftops.”

According to Francis, organizers in the U.S. are still tailoring the UK’s model. “Our intention is to provoke an uprising on a scale that’s never been seen before in the U.S., a national coordinated economic and government disruption that will be maintained until the government is forced to negotiate with us.”

Utilizing strictly nonviolent tactics and operating within a largely decentralized structure, the Extinction Rebellion has three ambitious demands: to push governments to communicate the truth of the ecological crisis to the public, to reduce carbon emissions to net zero by 2025 and to allow the formation of a democratic “citizens assembly” to oversee the massive changes this would necessitate. The New York City chapter of XR also includes a demand for climate justice, or “a just transition that prioritizes the most vulnerable people and indigenous sovereignty.”

On Saturday, the sun was out but the air was frigid, and attendees, ranging from small children to septuagenarians, bounced and clapped and danced to stay warm. This, along with the bright neon colors and the singing and the camaraderie, gave the event a surreally festive air, considering the subject matter. But looking the worst-case scenario in the eye — and doing something about it, no matter how herculean — seems to provide a certain amount of existential relief.

“Oh man, I’ve been pretty numb about this issue for a few years, and something in the last few months has just made me realize how terrified I am,” Jesse Marshall, 29, tells Rolling Stone. “I feel the need to do something, and this is happening, so I want to be a part of it.” 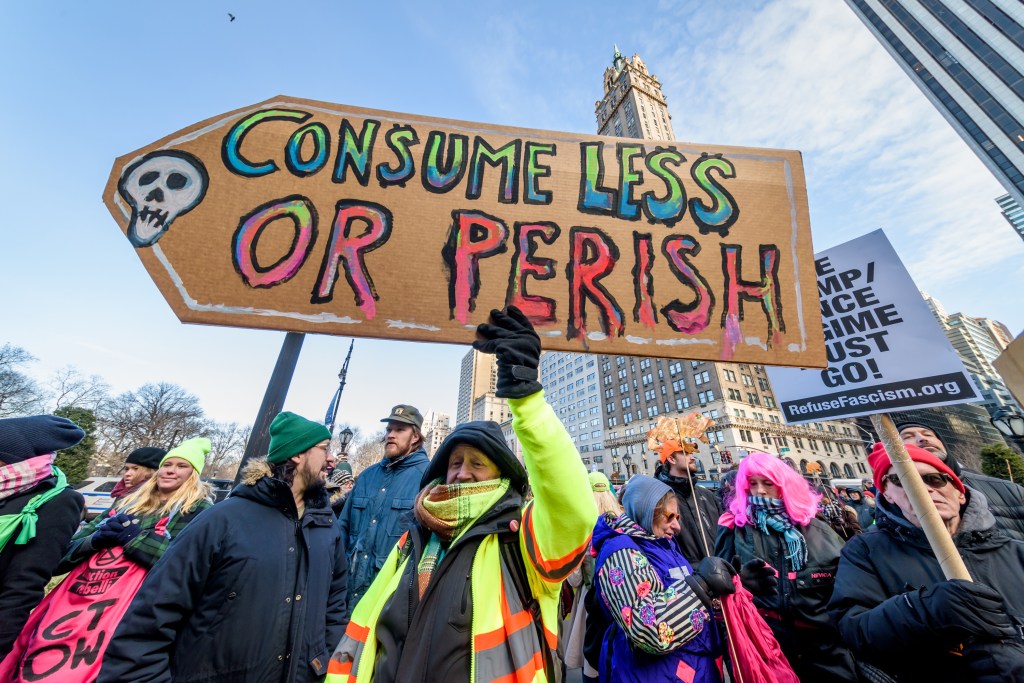 “I feel like I’ve been waiting for something like this to happen,” says Kurt Wheeler, a 28-year-old urban planner with a bright expression.

Melanie, a 21-year-old student who declined to give her last name, says she was attracted to Extinction Rebellion because “everything is just lip service right now from what I’m seeing, I need action.” She’d been involved in Black Lives Matter, but found it was harder to organize people around the environment. “I think people aren’t ready to confront the issue, it’s a massive issue and it overwhelms people,” she mused. Like many at the event, including its organizers, Melanie thought the movement needed to work to engage frontline communities. “I think we need to do a lot more community outreach to actual people, the vulnerable people who are exposed to the worst effects of climate change.”

Around 2 p.m., attendees were asked to organize themselves based on their willingness to get arrested; noncitizens and others looking to avoid arrest would head to the front, and those willing to participate in a series of “die-ins” were instructed to move towards the back. A pair of teenage girls conferred nervously. “Let’s just do it,” they decided. Haley, 18, and Yasmin, 17, had crossed paths at the first NYC Extinction Rebellion meeting in December, bonding over their desire to see more people their age get involved.

“I’m really passionate about the environment and I’m really tired of feeling guilty and not doing anything about it, so I just want to finally do something about it,” Haley says.

Soon, the crowd marched down Fifth Avenue, stomping past Bergdorf Goodman and Trump Tower and Harry Winston and Victoria’s Secret with wide-eyed shiny-haired tourists Instagramming this eccentric NYC moment. A protester in a bright pink wig and a stern expression tells me “Americans are gluttons.They think the world is their pig pen. It’s disgusting.”

When the march reached the skating rink at Rockefeller Center, the group fanned out. Some laid down on the sidewalk in Extinction Rebellion-labeled smocks representing climate-related tragedies; others rented skates and arranged themselves face-up in the middle of the rink in a circular pattern that mimicked the Extinction Rebellion logo. A John Mayer song beamed over the loudspeaker as a figure skater in a fur vest spun determinedly around the prone rebels.

Back on Fifth Avenue, eight protesters were eventually arrested after blocking traffic. Schwedock was arrested, too, after climbing up the famed Prometheus statue to hang a black banner reading “CLIMATE CHANGE=MASS MURDER.” Behind him, a quote carved into the granite read: “Prometheus, Teacher in Every Art, Brought the Fire That Hath Proved to Mortals a Means to Mighty Ends.”

As Schwedock made his descent to cheers, a protester next to me briefly stopped banging on a pink plastic bucket with a wooden spoon to raise her eyebrows conspiratorially. “Can you imagine if you were here and you just go on skating?”