We Can Tame the Debt Without Breaking Medicare, Medicaid and Social Security - Rolling Stone
×
×

It’s conventional wisdom among everyone from Republicans (and too many Democrats) in congress to the Washington Post editorial page to members of blue-ribbon committees (cf., Bowles/Simpson) that, thanks to our huge and all-devouring national debt, we can no longer afford Medicaid, Medicare, Social Security.

Like a lot of conventional wisdom, this is wrong.

But don’t take it from me; take it from the Congressional Budget Office, Washington’s scrupulously nonpartisan scorekeeper. CBO recently released its long-term outlook for fiscal policy – the taxing and spending by the federal government over the next few decades.  As the graph below shows, they outline two very different scenarios: In one, the debt explodes; in the other, it stabilizes and slowly drifts downward.

What happens next in the public debate over all this is, I fear, predictable. Most of the doom-laden talk will be of the entitlement crunch, fiscal cliff, crisis, death spiral, or whatever … waiting for us out there in the future if we fail to muster the steely-eyed courage to face it – with “face it” invariably meaning cutting benefits, privatizing, voucherizing, raising the retirement age, means testing … basically, fixing Medicare, Medicaid and Social Security them by breaking them.

Just look at how the Post greeted CBO’s report. A piece entitled “…CBO’s Debt Numbers are Still Scary,” warned us that the new estimates “underscore that Medicare must change, a lot.”  A few lines in: we face “… a death spiral of ever-higher interest payments.”

And, in fact, under the explosive scenario debt swamps the economy, reaching 200 percent by 2037.

But look at the other line.  Under that scenario, which in fact happens to conform to current law (meaning all the Bush tax cuts expire, for example), debt stabilizes as a share of the economy in a few years and then starts down a slow glide path.  And that’s without “fixing” – i.e. dismantling – Medicare, Medicaid, and Social Security as we know them today.

Under this latter scenario taxes go up and spending is restrained compared to the other one.  Some of the assumptions involved — like we allow Medicare payments to doctors to fall sharply or all the Bush tax cuts do in fact permanently expire next January — are unrealistic.  More likely, were we to follow the broad outlines of this path, we’d have higher budget deficits for a few more years as the economy recovers.  But if we then make the necessary tax and spending changes, we could then rejoin the virtuous path.

The point is there’s no reason why something like that bottom line’s baseline couldn’t prevail.  The choice is not cosmically determined; it is political.  The Bush tax cuts would all have to eventually sunset, and we’d need to continue – and ramp up – what looks like early progress on slowing the growth of health care spending.

But aside from dysfunctional politics feeding a largely misleading public debate, we could do this.  If we, as a nation, decide that we want to achieve fiscal sustainability and preserve the entitlement programs, along with government’s other critical functions, it is well within our means to do so.

That is an equally valid message to take from the CBO analysis.  Those who chose to ignore it are doing so not for substantive, but for ideological reasons. 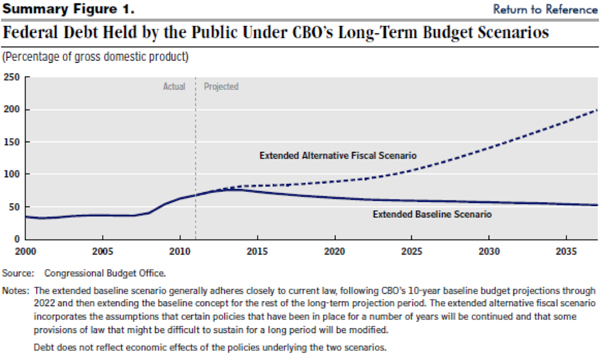