John Dean knows what it’s like for a scandal with the power to destroy a president to stalk the White House. Dean served as White House Counsel under President Nixon and can testify to the enormous toll that lying, deflecting, hiding and obstructing took on him and his colleagues following the 1972 Watergate break-in. A few months after Nixon fired him, in 1973, Dean testified before the Senate and became the first member of the Nixon administration to directly implicate the president in the cover-up. After serving four months for conspiracy to obstruct justice, Dean became an investment banker, lecturer and best-selling author of the Watergate memoir, Blind Ambition, among other books. Recently, former Trump advisers ensnared in the Mueller investigation – from George Papadopoulos to Michael Cohen – have evoked Dean as a model for launching a second act to an otherwise tarnished political career. His advice is simple. “The truth always has a way of surfacing,” he says. “The sooner that happens, the better for all.”

'Cry Macho': A Clint Eastwood Movie That Shoots Right to the Heart

You famously warned Nixon that the Watergate scandal was a “cancer” consuming his presidency. If you were White House Counsel today, what advice would you give President Trump?
Trump is the most incompetent person to ever become president. He didn’t want the job, only the attention. He has no disposition to learn about his job. He should announce he is going to resign at the end of his second year – and do just that. If he has committed crimes, he should take responsibility for them. Right now he is on track to become the worst President of the United States – ever!

We hear an awful lot of speculation about Paul Manafort or Michael Cohen flipping and talking to investigators in exchange for leniency. What does Watergate have to teach us about how targets of a Special Counsel investigation hold up under the pressure?
I’m not sure Watergate has any direct lessons for getting people to testify. Decisions about being a defendant versus being a witness depend on individual cases and situations. For example, I had broken ranks while still at the White House and tried to get Nixon to end the cover-up. I went to the prosecutors of my own volition and told my colleagues what I was doing, encouraging them to do the same. When I realized the situation was too large for the U.S. Attorney’s office in Washington, D.C., I went to the Senate, which had created a committee to investigate the matter.

Trump has several advantages that Richard Nixon didn’t have: Fox News, right-wing radio, social media and the partisan blogosphere, to name a few. What do you think the outcome of Nixon’s presidency would have been had this current media landscape existed back then?
Nixon might have survived if he had Fox News and the conservative media that exists today. I doubt Trump will be forced from office, even if Mueller has tapes of him talking with Putin about how to rig the election. While we might have a Democratic House after the 2018 elections, which could impeach Trump, I do not see the needed 67 votes in the Senate to find him guilty and remove him from office. And given the fact he is shameless, he will never resign.

Do you get the sense that the Trump administration absorbed the lessons of Watergate as it attempts to fight off the Mueller investigation or is it repeating the same mistakes?
The Trump administration does not seem to have a clue what happened in Washington before they arrived. They are totally ignorant of not only Watergate, but Iran-Contra and Clinton-Lewinsky, all presidential scandals. They are making a lot of uncalled for errors, starting with the president not hiring competent counsel.

Your Senate testimony was a turning point in the Watergate investigation as you directly implicated the president in the Watergate conspiracy. What’s your advice for the next John Dean, an insider increasingly torn between his or her loyalty to the president and the country?
I tried to get Nixon to end the Watergate cover-up, to save his presidency. I failed. But I refused to either continue the cover-up or lie about it. The truth always has a way of surfacing, and the sooner that happens the better for all.

The Nixon approach to fighting scandals was, as you put it in Blind Ambition, “hide the facts and discredit the opposition.” Today’s opposition is being discredited like never before. Do you see signs that the Trump administration is hiding the facts as well?
Very few facts of what occurred between Trump, his aides and Russia have leaked.  We only learn the facts when Special Counsel Mueller takes action in court. There is no question that Trump and company are volunteering nothing, and when facts are learned they often change their story – several times. We have never had a White House and president that lies so constantly and pervasively. 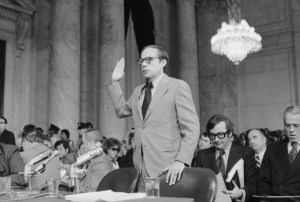 Testifying before the Senate Watergate Committee, Dean said President Nixon not only knew about the Watergate cover-up, but also helped try to keep the scandal quiet.

Trump, like Nixon before him, is another insecure, erratic individual in the White House. From your experience, what do you expect Trump’s reaction will be as the pressure mounts?
Trump is not only insecure and erratic, but uninformed, for he doesn’t read history, or know it. Nor does he respect standards of conduct. I expect a real constitutional crisis with Trump. For example, when the U.S. Supreme Court ordered Nixon to turn over his taped conversations to the special prosecutor, Nixon did so. I don’t believe Trump would have done so. Only if the House impeaches and the Senate convicts and votes for his removal will Trump be out before his term ends because a removal vote takes the office from the president and it is automatic under the Constitution. Or, if Trump loses the 2020 election, his term will end, and the new president will be sworn in – and he will contest it, claim a rigged election, and make life miserable for the world. However Trump’s presidency ends, I expect it to be ugly. He has no respect for the rule of law, or historical norms, or standards of conduct. Because he is shameless, he will do it his way, which will be un-American and unprecedented.

In your days as White House counsel, you met with then FBI Director L. Patrick Gray III and asked him for sensitive internal FBI files on the Watergate investigation. Today, it’s the House that is demanding sensitive internal FBI records relating to “potential violations” in the bureau’s Russia investigation. Is this legitimate oversight or something else?
The FBI’s Watergate investigation was rather open. Today we know that the assistant director in charge of the investigation, Mark Felt [aka “Deep Throat”], was leaking to the press, so the press regularly reported on the investigation. When I was instructed to look at the FBI’s files, most all of them related to events that had transpired weeks, and even months, earlier. I used the files to try to figure out who was leaking, but that was not possible. The files given the Nixon White House were useless. The Senate Watergate Committee was given only limited access to FBI files, and the Watergate special prosecutor only provided information to Congress through the presiding judge on the case. The efforts of the House GOP to get access to the current Mueller investigation are unprecedented, and appear to be in coordination with the Trump White House. While “legislative immunity” protects members of Congress undertaking official activities, obstructing or tampering with a special counsel investigation is criminal activity, and these House Republicans are playing with fire. If they continue they may end up explaining themselves to a Grand Jury.

Just like Trump, Nixon had many defenders who hung on for a year or more as the revelations of Watergate mounted. What led those who stood by Nixon to finally yield?
The Nixon apologists were initially men and a few women who owed their careers to Nixon, so they “hung on.” Other, later Nixon admirers with whom I have spoken are totally ignorant about the facts, and don’t want to learn them. Nixon, like Trump, is an authoritarian personality, and authoritarian followers can conjure all sorts of explanations of why they believe in their leader.

Worse than Watergate was the title of your book about the George W. Bush White House. What would be the title of John Dean’s book about the Trump White House?
My editor came up with that title. But when it was revealed that Bush and Cheney were using torture, I thought it fully appropriate. I have yet to decide if I will do a book on Trump’s presidency. I will wait to see what others produce. I hope the feeling in my bones about Trump’s behavior is wrong, but at present I feel like the Russia investigation may produce the worst presidential scandal in American history because Trump is threatening the very nature of our democracy. The title that has rumbled around in my head is rather blunt: Trump’s Treason.