Around 3 a.m. this morning, as Saudi-led coalition jets circled above Sanaa and ground forces replied with anti-aircraft fire, an object hurtled out of the sky and crashed into a row of houses in the old city, reducing four homes to rubble.

As dawn broke, several dozen men worked frantically to pull their neighbors from the wreckage. Heavy machinery and militiamen arrived from the local Popular Committee, the political arm of the Houthi movement that took power after President Abdurab Mansour Hadi fled to Riyadh in March. At least six people were killed, including a woman and a fifteen-year-old boy. “There are no fighters here,” a nearby resident, Ibrahim Dhal, said, standing amidst piles of bricks and household items, including children’s toys. “They killed women and children while they were sleeping.”

Death From Above: How American Drone Strikes Are Devastating Yemen

This section of Yemen’s capital is a marvel of ancient engineering, and home to some of the world’s first high-rise buildings. Though Sanaa has been under bombardment for over two months, this was the first strike in this part of the city, a UNESCO World Heritage site, and it’s unclear why the area was targeted. Witnesses say there was no explosion, and windows on neighboring buildings were unbroken. (Speaking to the press, a spokesman for the coalition, Brigadier General Ahmed al Asiri, denied responsibility for the strike, suggesting that it might have been an accident involving a Houthi ammunition storage site.)

The destroyed homes belonged to several related families. “My brother’s son in law is underneath this,” said Abdullah Kakila, a retired air force soldier. He blamed the US government for supporting Saudi Arabia’s air strikes, and allied forces — including Egypt, Jordan and Kuwait — for joining the proxy war to restore the ousted regime. “My brother’s daughter has two children. Who is going to take care of them? Obama? John Kerry? King Salman?” 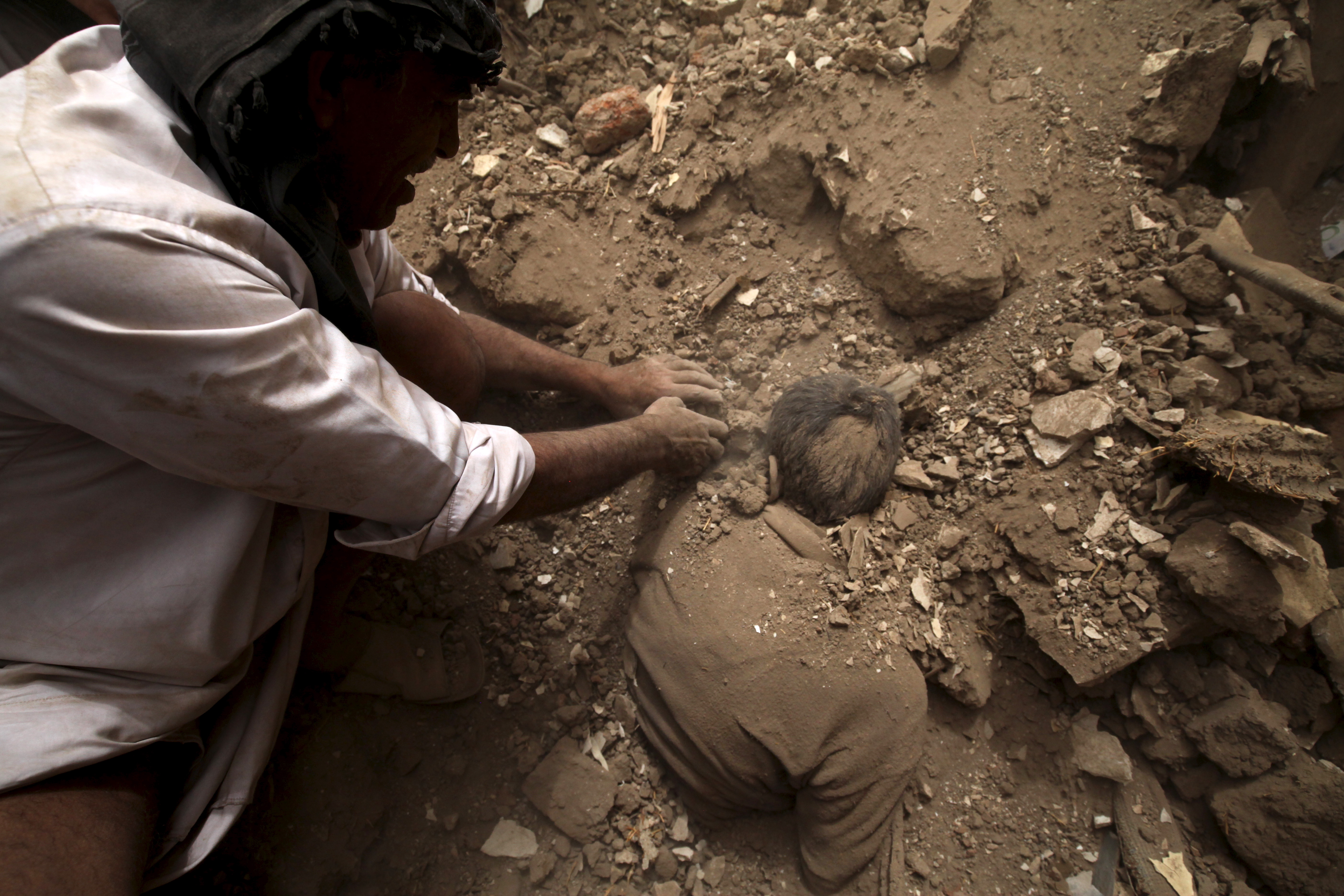 Air strikes in Sanaa have caused mounting civilian casualties; the World Health Organization estimates that nearly 2,000 people have been killed in the conflict. Houthis continue to fight a range of opposing forces, including Al Qaeda, which has taken advantage of the unrest to seize a swathe of territory in southeastern Yemen.

At the same time, the Saudi coalition has imposed an air, land and sea blockade on Yemen—already the Middle East’s poorest country. Humanitarian groups now estimate that 20 million people, about 80 percent of the population, lack medical supplies, food and water and are in urgent need of aid. The coalition’s blockade has also prevented foreign journalists from boarding flights or aid ships into the country, no doubt for fear of them witnessing scenes like this one in old Sanaa today.

Matthieu Aikins and Sebastiano Tomada recently arrived in Sanaa by boat, after a long journey across the Gulf of Aden from Djibouti.