Donald Trump is no longer president of the United States, but to paraphrase Robert Earl Keen: the road goes on forever, and the grift never ends.

The Washington Post reported late last month that Trump’s Save America PAC has raked in over $75 million in 2021, largely on the idea that last November’s election was stolen and Trump needs all the help he can get to uncover the truth. The report continues to note that not much of this money has actually been spent on efforts to overturn the election, instead going to Trump’s travel, legal costs, and other expenses. Maybe it will be used to prop up MAGA-friendly Republicans running in 2022? Maybe it will be used to fuel a Trump presidential run in 2024? Maybe it won’t. There aren’t many limits on the how the Save America PAC can spend its money.

The Bannon Subpoena Is Just the Beginning. Congress's Jan. 6 Investigation Is Going Big

They’ve found a cheap new way to rake in more cash, though. The PAC sent out two emails on Wednesday informing supporters that “Official Trump Cards” for Trump’s “STRONGEST supporters” are on the way. The emails have images of four red-and-gold card designs. One features an eagle many are comparing to Nazi iconography. One misspells “official” as “offical.” Click on them and you’re redirected to Trump’s fundraising page. It’s unclear at this point how one would go about obtaining one of the cards once they are released. 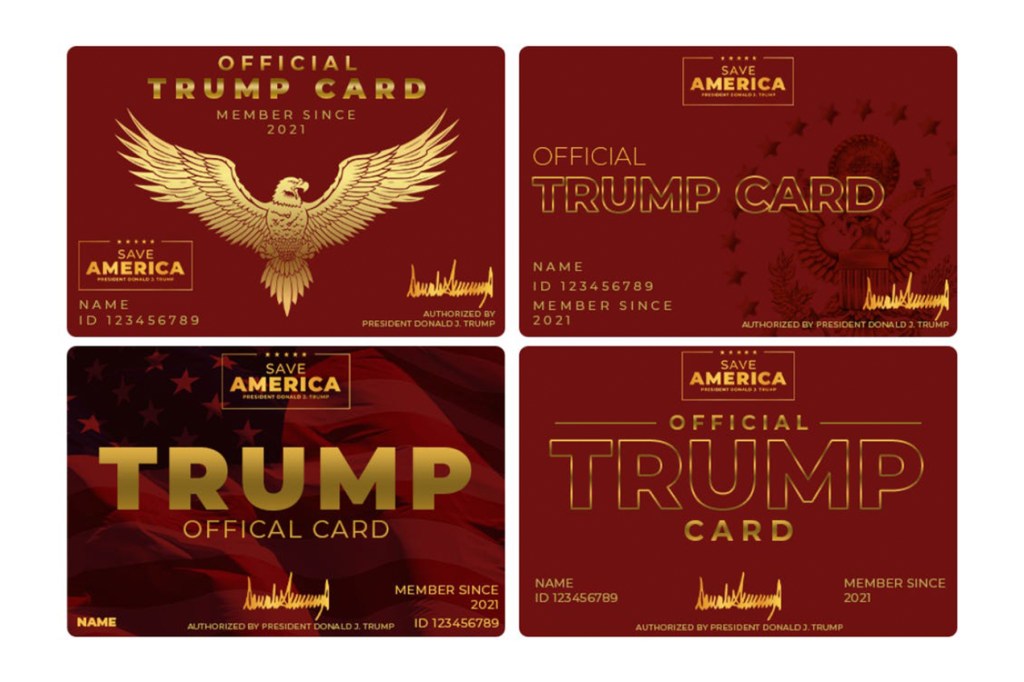 The eagle is likely intended as a nod to the national bird of the United States, and indeed U.S. politicians continually use the raptor a patriotic symbol. But many a, erm, sharp-eyed Twitter user has noted Trump’s eagle has more than a passing resemblance to Nazi iconography, both in color and design.

We’ve been through this before, with critics saying these are signals to the far right and Trump’s team claiming its all anti-Trump hysteria. But here’s what’s undeniably true: Trump has also built a nationalist political movement by demonizing certain groups of Americans and accusing them of betraying the country. Given those parallels with Nazis and other fascists, it would probably behoove Trump’s fundraising arms to make a concerted effort to avoid using imagery redolent of Hitler if they really want to stand apart from some of the worst regimes of the past century. Then again, that might be too much to ask, considering they’re not even taking the time to use spell check.

Trump’s shameless attempts to wring money out of his supporters pre-date his departure from office, of course. Beginning in 2018, his campaign held a series of contests to have lunch with the president, but there’s no evidence they ever delivered on the offer. Various forms of trickery were employed throughout the remainder of Trump’s time in office, including an insidious effort to dupe supporters into unwittingly sign up for recurring donations, as The New York Times reported in April.

The emails hawking Trump Cards were initially reported by Insider, which notes that toward the end of July the PAC announced it was selling signed photos of the former president for $45. Desperate as Trump may seem for money, the Times reported last week that he ended the first half of 2021 with a stockpile of cash exceeding $100 million.