“People always ask me, ‘Why aren’t there artists writing lyrics like Public Enemy or the Clash or Rage Against the Machine?'” Tom Morello says. “And my answer is always, ‘There are. They may not be currently at the top of the chart and you have to seek to find them, but there are.'”

Now the guitarist, known for his work in Rage Against the Machine, Audioslave and the Nightwatchman, has helped make a home for them: Firebrand Records. “The label gives you one-stop shopping for all your rebel-music needs,” he tells Rolling Stone with a laugh. “It’s the kind of label that I wish had existed my entire artistic life.”

Firebrand, which Morello co-founded with Ryan Harvey of the Riot-Folk Collective, launches today with a digital sampler of music by Harvey and some of the not-yet-famous activist musicians Morello says are still out there: Egyptian revolutionary Ramy Essam, San Francisco indie rockers Built for the Sea, Swedish punks Lycka Till and Bronx-based post-rock singer Bell’s Roar, among others. Hear the compilation’s lead track, “It’s Like That” – a grimy screed about police-on-citizen violence by Baltimore rapper Son of Nun – below.

“This song is before and after Black Lives Matter,” Son of Nun tells Rolling Stone. “It’s the same song we’ve been singing since we got off the boat. Y’all just haven’t been paying attention. It’s about fighting for each other in the face of white supremacy, seeing connections with other people’s struggles, and recognizing our own power.”

For Morello, it’s the sort of social salvo he feels embodies the label’s mission. “Firebrand artists are black, white, Arab, Jewish, men, women, queer, straight, folk, punk, hard rock, hip-hop, but they all have one thing in common: They play music with a sense of purpose to create a more just planet,” Morello says. “There’s no other label like Firebrand that exists, and I think in these troubled times successful social movements always require a great soundtrack – we aim to provide it.”

How did Firebrand Records come together?
My partner in crime in this, my co-conspirator Ryan Harvey, and I have been friends for a long time. He’s a true-blue folk rebel. We’ve played in tear-gas clouds and on the frontlines of the global struggle together for years. We were sitting around, and he was talking about an idea that he had for a record company and I’ve long mulled the notion of having a politically-oriented label, so we combined forces and Firebrand is the result.

Who is this label for?
There are always artists on the frontlines of social justice struggles, and now they have one home and one label. But first and foremost the music has to be great. It’s not just like, “Hey, you wrote a song about Guatemala labor unions, come on our label” [laughs]. There’s an extensive vetting process. Separating the wheat from the chaff is key.

So who is on the label then?
Ramy Essam. He was in the Oscar-nominated movie The Square, but he was one of the leaders of the Egyptian revolution. He was tortured and exiled for his role in that. He’s kind of the poet laureate-slash-hard-rock Bob Dylan of the Middle East [laughs]. Then there’s Son of Nun, who I met some years ago playing a show for anti-war veterans of the Iraq and Afghanistan conflict. I just thought his lyrics are as insightful and deep as Nas but with a radical bent that’s beautiful. A couple of weeks ago he was running a medical tent during the Baltimore uprising. These are people who are not just revolutionary in their music, but with their actions.

Is that a requirement?
No, it’s not a requirement [laughs]. But it shines a light on the commitment and the uncompromising nature of the artists on the label.

What strikes you about Son of Nun’s “It’s Like That.”
To me, it feels both timely and timeless, lyrically, and it’s a really hard-hitting track. We wanted to come out with something that was a real mission statement for the label.

What will be the label’s first full length?
Ike Reilly’s Born on Fire. In my view, he’s one of the best American songwriters of the last 10 years, both in delivery and lyrics. It’s, like, part Springsteen, part Replacements. And we grew up in the same hometown, Libertyville, Illinois, where Adam Jones of Tool and Marlon Brando came from as well [laughs]. There must be something in the water there, for a suburb known principally for its Buick dealership.

“In 2015, nobody with any sense is starting a record label to try and become Interscope.”

How will your label be favorable to artists?
Well, we are not a non-profit label. We may be more accurately described as an anti-profit label [laughs]. In 2015, nobody with any sense is starting a record label to try and become Interscope Records. We have a very clear mission, and that is to bring global revolutionary music to everyone who wants to hear it. As someone who’s spent a couple of decades with various labels, I see it exclusively from the artist perspective. We’re not trying to get rich off Firebrand Records, we’re trying to enrich people’s hearts and minds.

I mean, Ryan comes from the D.I.Y. anarcho-punk folk scene. And for me, in both Rage and the Nightwatchman, we were not, like, label dudes. So a crucial part of it just have it be very artist-friendly. 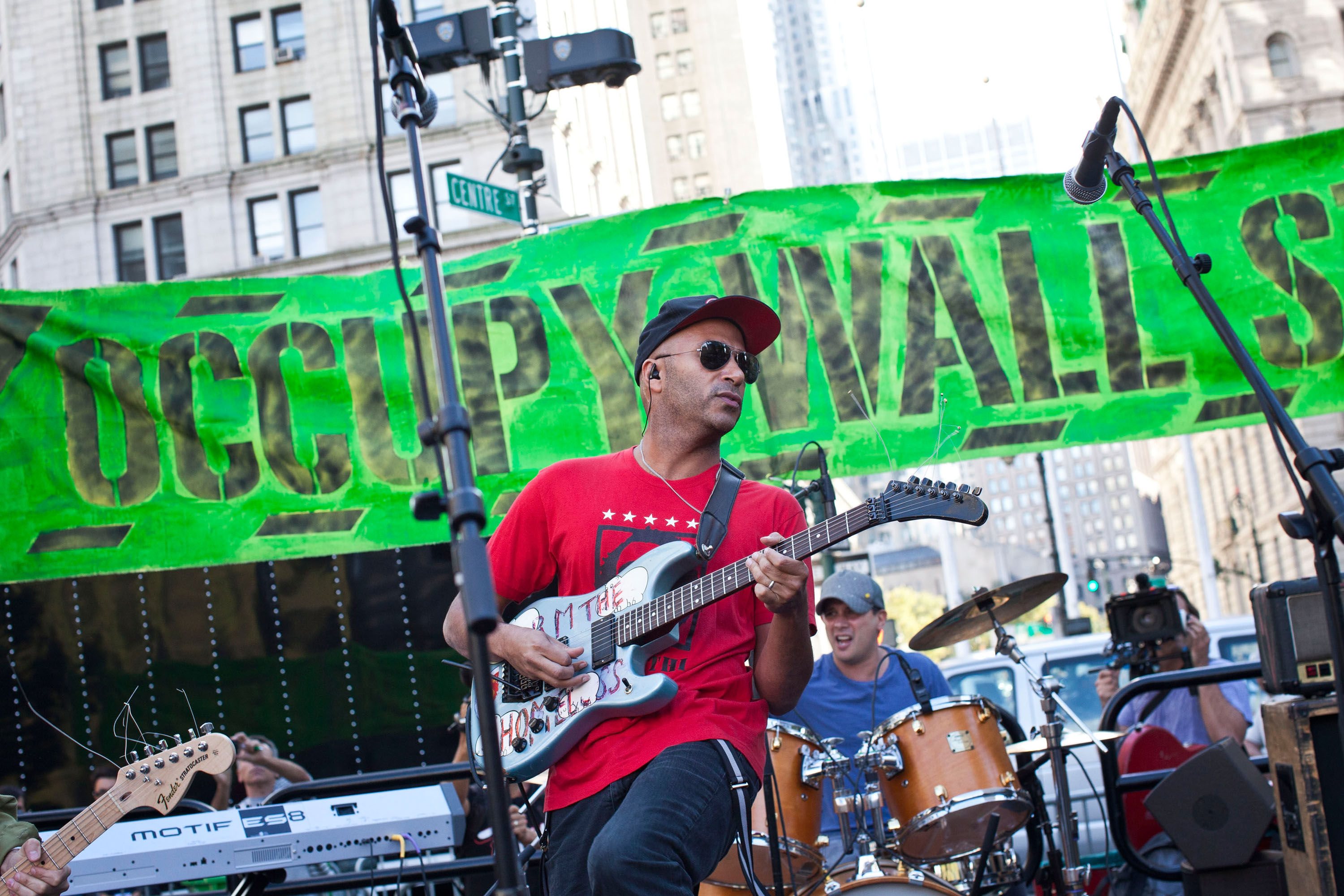 Will the label, as an organization, also be involved in activism?
To be determined. Right now, the idea is to get the music in people’s hands, to introduce the roster. We just want to let people know, “Hey, this is what’s coming. You can get a track or two from all the Firebrand artists.” In the future, we’ve discussed having touring packages and things like that, the various charity and activist aspects, funneling our resources into in those areas. But right now, it’s been a momentous task just to get the label up and running.

One of the things we’re doing actually started this past Friday, called Firebrand Fridays. We played a small place in Los Angeles with Tim Armstrong, Wayne Kramer, Jill Sobule and the Last Internationale, and the idea is that every Friday is a Firebrand Friday. And to encourage artists with a radical political bent wherever they are to get up on some stage or at some barricade or in some basement, sing their song, send it in to us, and then via the website we’re gonna broadcast the best of every Friday all over the globe.

Will you be putting out your forthcoming solo record on Firebrand?
No. I was signed to Mom + Pop Records prior to the even the notion of this being a label, though I do guest on at least two of the records that we’re making right now. I play on Ike’s record, and I play on Ryan’s record.

I found this sentence from Firebrand’s mission statement interesting: “We know that music alone does not change the world, but we recognize that it is an integral part of the movements that do.” It seems you believe it.
That’s right, yeah. Music both reflects and propels the struggles of the day.

Even if music alone does not change the world.
Yeah, though I suspect it might [laughs]. We’ll see. We’re determined.