There are a few universal conversations at large political events: Who’s sleeping less, transportation woes, etc. But each event also has its own unique conversation, and for the fifth GOP debate, at the Venetian Resort-Hotel-Casino in Las Vegas, it was this: “Who just bought the Las Vegas Review-Journal?” The guess was usually the same: Adelson. Even if it was wrong, it was right. All of us — the hacks, the candidates, the entire American discussion — were in Sheldon Adelson’s world already.

The question came up repeatedly because the purchase was so odd. The new owner was listed as an essentially unknown company, who, as it turned out, paid $40 million over market value for the Review-Journal alone, omitting the other papers it had been bundled with in a previous sale.

Tagging Adelson with the purchase made sense: He’s already a casino mogul, a Vegas institution, and as someone Forbes lists as the eighth richest person in the world, he could afford to overpay for a mouthpiece. Besides, he already founded a newspaper, the Israel Hayom, whose journalistic relationship to Benjamin Netanyahu is less impartial than Scientology’s public relations team is to David Miscavige.

At the same time, it seemed superfluous. The Adelson world was all around everyone, in many ways quite literally. The event was housed in his own resort, in an ersatz European opera house that was only one small part of what is probably a monument to a Northern Italian vacation he once went on. Figuratively speaking, once the debate began, there was no doubt whose territory we were in.

Republican fear-mongering has a proud tradition. Communists in the State Department “lost” us China, a nation we never had. Communists in Hollywood were infiltrating your brain. Feckless Democrats stabbed us in the back over Vietnam, ruined college and womanhood, and they’re rebooting all your favorite movies and shows with people who look like the help. The left has allowed so many fifth column elements into this country that you could use them to erect a dozen Parthenons with enough leftover to replace the Great Colonnade at Apamea if Daesh ever gets around to destroying it.

But this ostensible foreign policy debate took things to the next level, achieving a constant bloodthirsty victim/murderer schizophrenia that surpassed Rudy Giuliani figuratively reenacting the prom scene from Carrie at the 2008 Republican National Convention. Daesh’s attack in Paris and their supposed connection to two Muslim assholes who armed themselves and got famous American-style were the supposed inspiration for the chorus on stage, but after that it was just the same notes screamed as loud as possible. 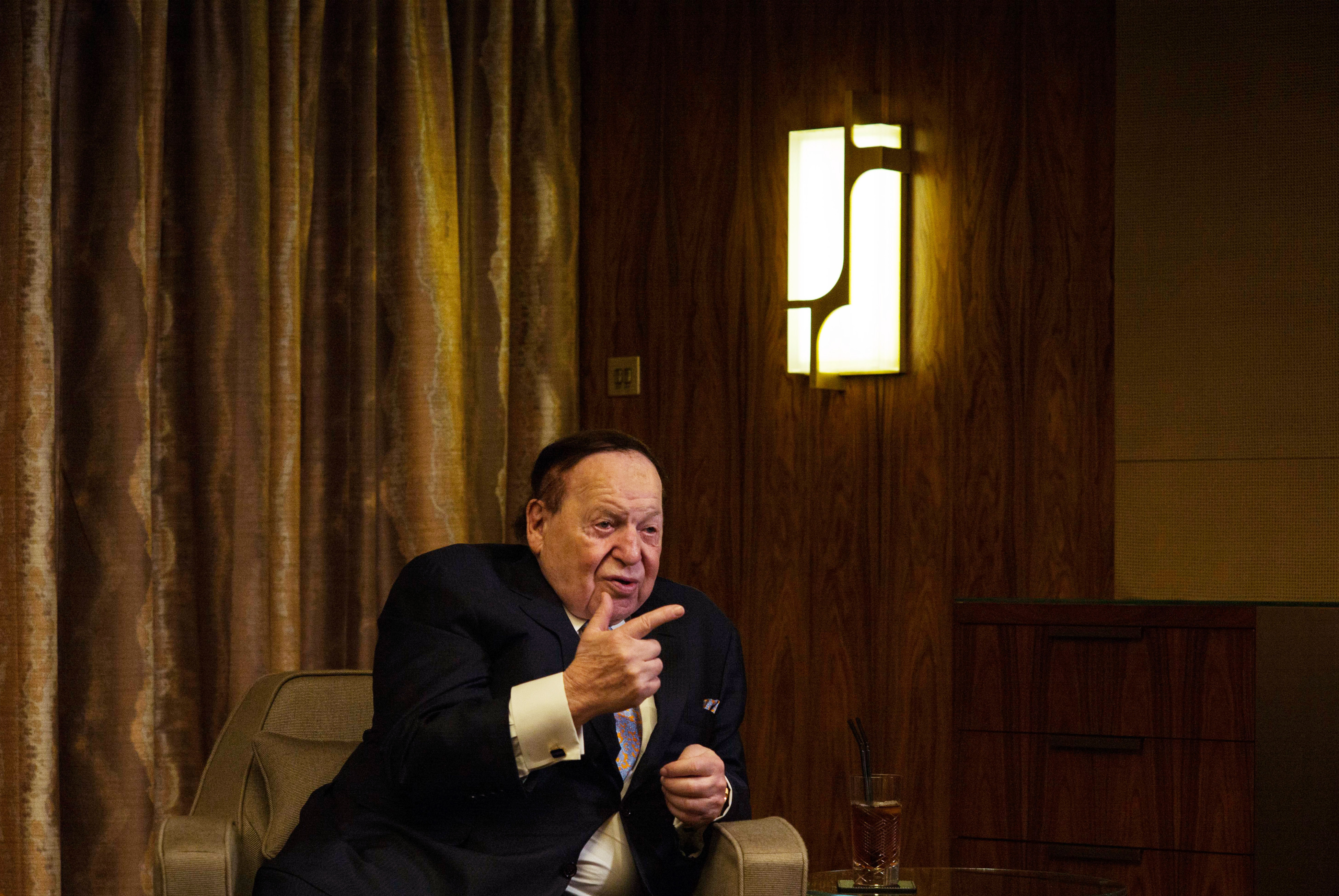 It was hard not to hear the echoes of Adelson’s world, in which everything is divided into a binary opposition of such chauvinistic fatuity that the Middle East map could be redrawn to depict Israel and Not Israel. The elemental reality of other peoples, motivations and the lived history of American involvement in that region being drowned out by rhetorical appeals to kill ’em all before they kill us all is not much different from a man who considers Palestine a “made-up nation,” that “the purpose of the existence of Palestinians is to destroy Israel” and that Netanyahu’s repeated demonstrations of collective punishment are just right-on. It’s the same mentality that conflates two Southern Californian shitheads into an existential threat to over 300 million people over 3.8 million square miles of continent and islands that must be stopped at any cost.

It’s the unanimous candidate opinion that funding and arming Israel with the same discretion as a bartender pouring comped shots for a customer who was overserved two beers ago is vitally necessary to every American citizen’s interest in staying on the good side of the mortality coinflip.

It’s Donald Trump speculating about whether we start killing the women and children to discourage the men with the guns in their hands already, which is the sort of thing we used to send people to Spandau Prison for. It’s a legitimately smart man like Ted Cruz calling for saturation bombing of the Middle East in contravention of its history of ineffectiveness in WWII and Vietnam and the last 13 years of our failing to blast our problems away.

It’s Marco Rubio saying we are in a “civilizational struggle,” as if every post-teen dead-ender in a Middle East riven with crushing generational unemployment and staring at a future with a blacker ending than the post-credits roll on a VHS tape is actually thinking, No, my real problem is the Banana Republic at the Silver Sands Factory Outlet Stores in Destin, Florida. Where can I get a dirty bomb? Fuck it, fuck them, they’re all the same. They hate us for our freedom and hate you in particular for literally whatever you’re doing while reading this.

And it’s hard not to think that brutal note was directed at an audience of one, especially when conservatives’ vying for his fundraising endorsement is already called The Adelson Primary and when candidates sought ahead of the debate to make sure he didn’t stack the event with his partisans and control the topics chosen. If the candidates already believe that his whims carry the day on foreign policy, we might as well spare ourselves the effort of divining their motivations.

You can’t find a better metaphor for the current state of the Republican Party than the Adelson debate — a spectacle held in a mall’s vision of high civilization, where a fastidiously designed attention-consuming apparatus siphons millions upward to a billionaire on the statistically rigged improbability that every average schmuck is one spin of the wheel away from joining the One Percent. Then that apparatus’ beneficiary dictates policy to people ostensibly contending for control of  a democracy of over 300 million souls.

That Sheldon Adelson can overspend for a newspaper to add another megaphone to his voice is almost beside the point. The man already does what he wants, up to and including lecturing the judge and opposing counsel when he’s being accused of bribery and money laundering with elements of organized crime. Giving orders to people looking for a handout is comparatively much easier. This is why every one of us needs to be convinced that we are on the verge of explosion or immolation at any given moment. Democratizing the risks obscures the purse strings and the narrowness of the interests the responses to them serve.

The moment we stop worrying that we are all in imminent danger is the moment we notice that a dozen people are all speaking to a wisp of shoe-shine dye-job hair garnishing a face like a half-blowtorched Jason Voorhees mask, pull a Scooby Doo and rip that sucker off, and reveal the person in charge of scaring us all was that crooked amusement park owner all along.