This Christmas, Tune It All Out - Rolling Stone
×
×

Before I had kids, I despised Christmas.

I thought the holiday was symbolic of everything that was fake, exploitative and wasteful about our culture. And nothing symbolized our population’s sheep-like inability to think for itself than millions of economically strained people stampeding into debt because Television tells them they will offend Christ if they don’t buy thousands of dollars of worthless crap.

A consumer Christmas, after all, is a bigger political shoo-in in America than an expanding defense budget. There will never be a meaningful movement in this country to make Christmas about peace, love and hand-made gifts. Even though many or perhaps most of us would like that, an avalanche of messaging would always intervene to prevent the holiday from ever being divorced from the ad-driven anxiety that’s needed to keep spending levels high.

America Is Too Dumb for TV News

All of this used to drive me crazy, but now? My little boy likes the tree. He’s getting Matchbox cars Friday, and he’s going to love them. I can live with the political downside.

As for the rest of that shopaholic, mall-rushing craziness that can make this holiday so stressful, it turns out that it’s optional. Switch off the wi-fi for a few days, turn off the TV, and it’s amazing how much more reasonable the world instantly seems.

This has been a bad year for America, largely because politically, we’ve lost the ability to tune out. We no longer know how to calm down and appreciate what we have.

Though our economy may not be what it was, we’re actually safer and less susceptible to crime or war than at any time in our history. But in the same way retailers want us buying on Christmas, others want us scared to death and addicted to news of threats at home and from abroad.

Media companies and politicians alike want us buying stories about terrorists, Ebola, immigrants, crime, hurricanes and whatever else gets the blood rushing to the fear center. And just as retailers sell us things we don’t need, news writers and presidential candidates alike will sell us scare stories, whether we need them or not. They will never not need us to buy. 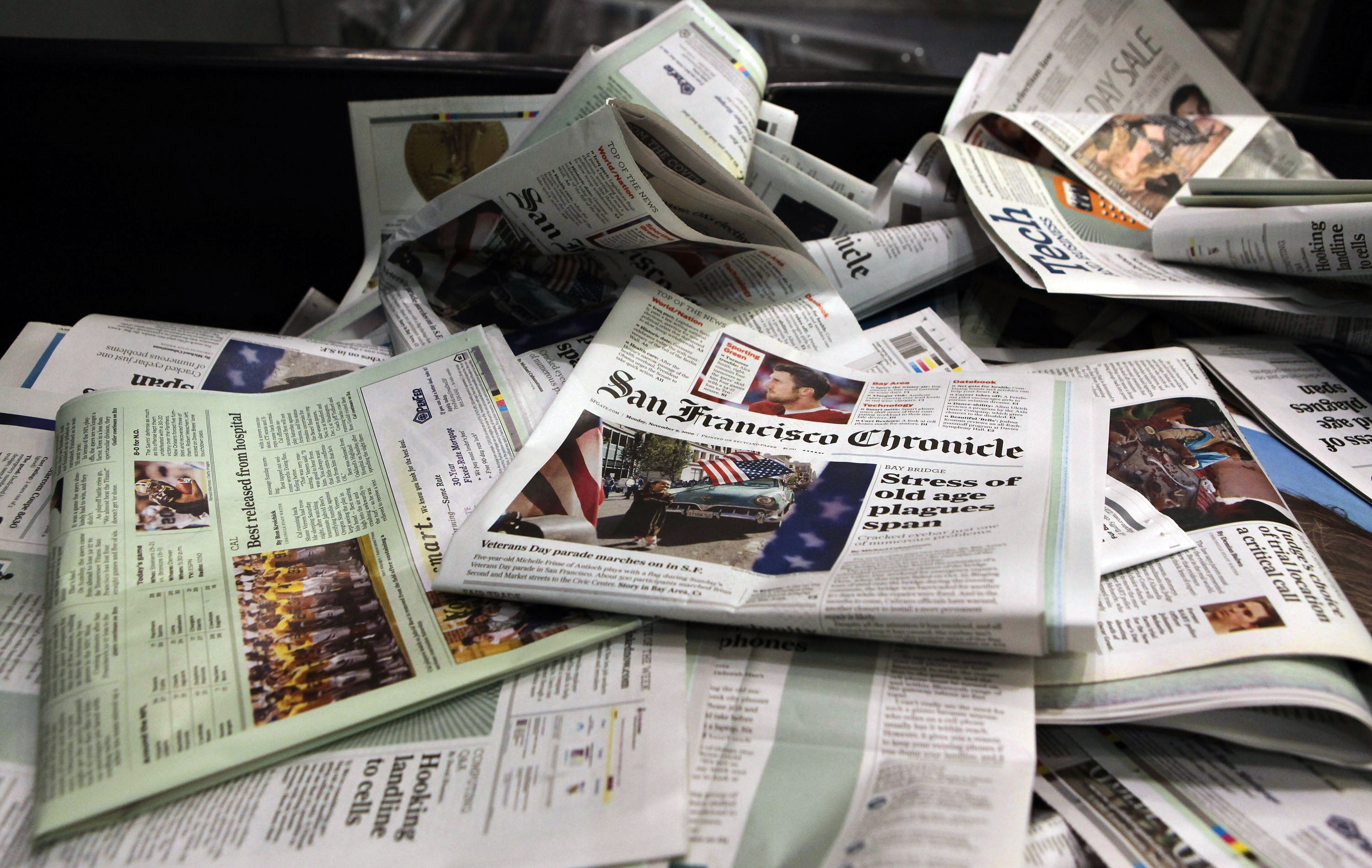 And we’re obliging. We’ve become fear addicts. Not that this world is without threats, but what there is to worry about – even the threat of being killed in a terrorist attack – exists on a level nowhere near in proportion to our anxiety.

Madison Avenue has always understood that scaring people is a fantastic way to sell things. Decades ago, the worst abuses on this front tended to be relatively mild appeals to social neuroses, things like the classic “ring around the collar” commercial that made a generation of Americans frightened of being the dope with the sweat stain around his neck.

As the years passed, advertisers learned a lot about how not just to use existing fears, but to create new ones. How do you sell Head & Shoulders in China, a country that traditionally never gave a thought to dandruff? Easy: You run ads to create the social stigma, then sell the solution in the same message.

We Americans grew up bombarded by manipulations like this, and it’s finally broken our spirit. After spending a long enough time learning to worry about relatively less harmful (though not harmless) things like having bad hair or yellow teeth or a thick waistline or unfashionable clothes, we’ve gradually become more susceptible to darker appeals.

What about those immigrants rushing across the border? Can you really be sure the people at the local mosque aren’t planning something? Couldn’t someone break into your home at night, or start shooting up your office?

It’s not that there aren’t real threats. The problem is that no one in popular culture is incentivized to mitigate our fears of those threats, or place them in context. Fox News is not going to sell many ads running stories called “Mexicans Are Basically Nice People Just Like Us.” CNN isn’t going to grab eyeballs showing videos of Muslim immigrants in New Jersey just hanging out watching soccer.

Moreover, any savvy Beltway operative will tell politicians that nuanced solutions and appeals for calm don’t fly with voters geeked up on fear. Barack Obama was panned a few weeks ago after the San Bernardino massacre, when he offered an oddly un-alarmist four-point plan to combat ISIS-inspired terrorism in a speech that might as well have been entitled “It’s Complicated.”

That doesn’t work with our generation. If you’re going to sell us on the contagion, you’ve got to give us the simple antidote in the same breath. Tell us we’ve got terrorists in our hairline, fine, but where do we buy the Head & Shoulders to get rid of them? We get off on the fear, but the easy solution is also part of the addiction ritual. Now, when it’s denied, we go crazy.

We saw this in the Republican debate last week, when the candidates repeatedly promised to resort to fantastic extremes to resolve our anxiety about things like terrorism and immigration. Debate moderator and jovially crazy person Hugh Hewitt, for instance, pressed Ben Carson on whether or not he could be as “ruthless” as Winston Churchill was fighting the Nazis. 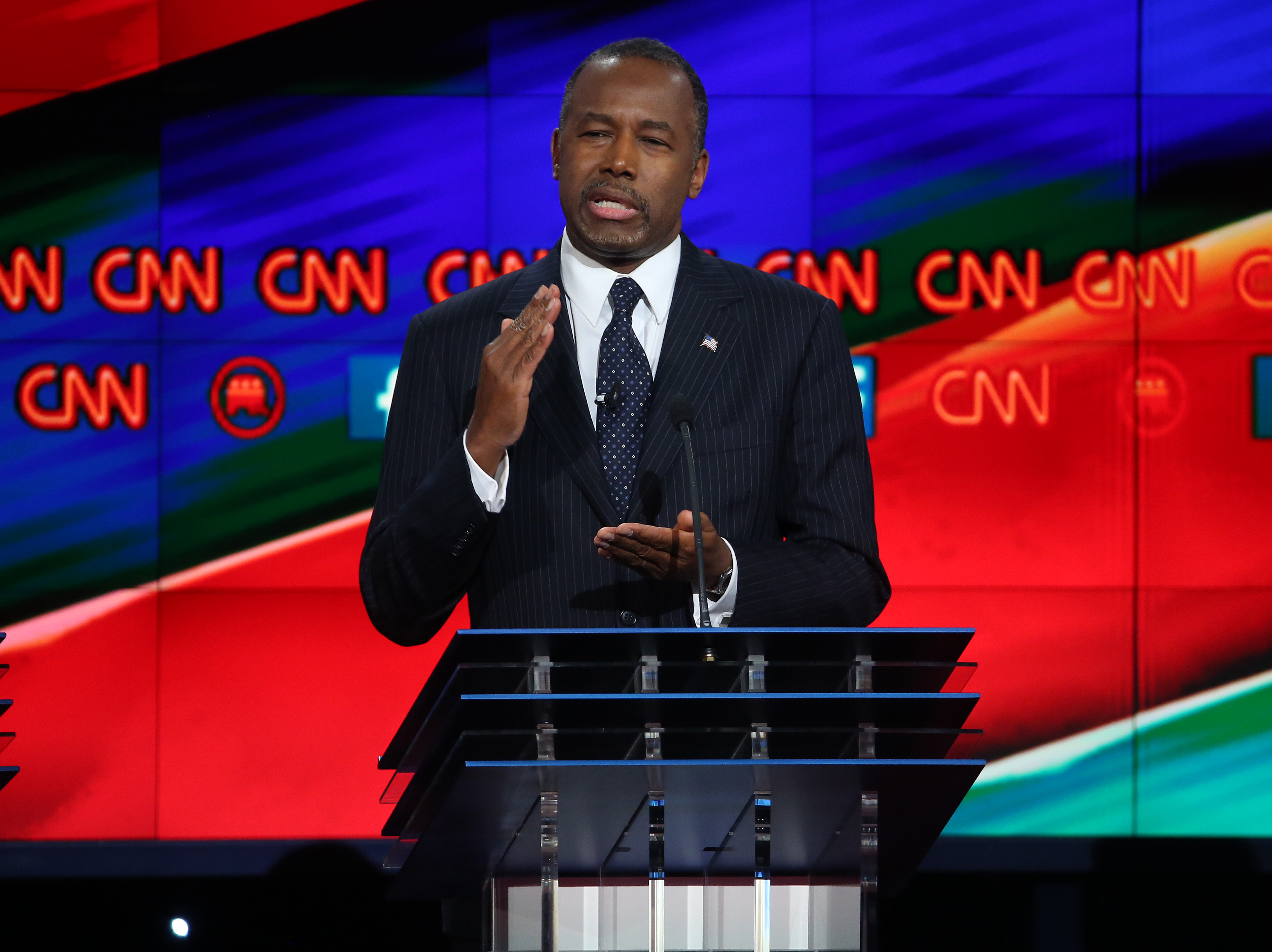 “So you are OK with the deaths of thousands of innocent children and civilians?” he asked.

Hewitt was so obsessed with the question of Carson’s willingness to kill children he asked it twice. Carson dodged the first attempt, but on the second he reassured Hewitt by playing up his experiences as a surgeon, when he told frightened children he would have to open up their heads.

Half-wits like Hewitt invoking the name of Churchill is a symptom of a protective fantasy we’re sinking into in our panic. We want to believe that complex problems like terrorism can be met on the field of battle and beaten, Sherman to Panzer, like we beat the Nazis.

It’s a national version of multiple personality disorder. We’re tuning out and switching into characters from Band of Brothers because we can’t handle who we really are: millions of people who feel helpless to do anything about those next-door neighbors who might be plotting mass murder.

The talk about internment and registries and carpet-bombing is just more Forties nostalgia. We want to shut the borders, put anything with slanty eyes in camps, and drop as many bombs on the bad guys as Rosie the Riveter can assemble. Our strength is in our industrial capacity, and we want to unleash it on someone, whether that will fix the problem or not.

People want answers. Rand Paul isn’t going to win the Republican nomination because his platform is a question. He began his remarks last week with this: “The question is, how do we keep America safe from terrorism?” You could practically see the question mark on his suit. He might as well have been wearing Frank Gorshin’s Riddler costume.

Paul then proceeded to pooh-pooh all the goofball fantasy answers his opponents are proposing: closing the Internet (!), banning religions, invading foreign countries. If we want boots on the ground, he said, they need to be “Arab boots on the ground.”

Paul was trying not to lie to the voters about what’s ahead. But that’s why he’s going to lose. Voters want easy solutions. It was weird enough when the idea of building a Great Wall of Mexico launched Donald Trump to the top of the polls, but now we also want to build a wall across the Internet, as though people could be physically prevented from getting bad ideas.

In reality, the solution to most of our fears is so much simpler. Stop watching the news. Or at least try to understand that there’s a massive bureaucracy whose entire purpose is to exaggerate threats and keep us afraid, just as there’s one designed to get us to empty our bank accounts at Christmastime.

What we’re experiencing now is very much a sci-fi dystopia, where an overweening and intrusive bureaucracy of interests controls us through legends of death and chaos behind the wall. A frightened population is comically easy to manipulate. Scared people will give up the few things they have – their rights, their money, their freedom to travel and explore the world and alternative ideas – in exchange for promises of safety, even empty ones.

And that’s exactly what we’re seeing this year. ISIS notwithstanding, Americans are the safest, richest, most extravagantly protected people in the world, but we’re more miserable, divided and frightened than ever. That we literally want to be walled off from the rest of the world would be bad enough, were it not also true that we increasingly also hate and fear each other.

It’s gone too far. Yes, there are things to fear in the world, but there always will be, if your habit is to constantly scan the entire planet for threats and horrifying images. At least for the holidays, let’s turn our scanners off and just look outside. It’s not that bad. We don’t have to be like this, not all the time anyway.