They Are Not Exactly Charlie - Rolling Stone
×
×

Pope Francis had a few things to say in relation to Charlie Hebdo yesterday. His collection of off-the-cuff (is it a cuff that the Pope wears? What’s the right idiom here?) statements was a bit ambiguous, but basically he said free speech is a fundamental human right, but not an absolute one.

He added, by way of a colorful illustration, that if someone “says a curse word against my mother, he can expect a punch.” Of course, he also said that “One cannot offend, make war, kill… in the name of God.”

Cartoons Are Worth Fighting For

So it’s a bit unclear: we’re not supposed to punch someone in the name of God, but we should expect it? Something might have been lost in translation.

The Pope’s comments were a distant echo of controversial statements made by Bill Donohoe, head of the American Catholic League. Donohue made headlines last week right after the attacks by semi-blaming Hebdo editor Stephane Charbonnier for his own death.

Donohue issued a statement called, “Muslims are right to be angry,” in which he wrote that “[Charbonnier] didn’t understand the role he played in his tragic death,” and “Had he not been so narcissistic, he may still be alive.”

Getting closer to his actual point, Donohue also wrote:

I realize I have zero credibility when it comes to writing about Catholicism and Popes in particular, so I’ll quickly broaden here to the larger point: eight days after the attacks on the French satirical magazine, we’re already in full-fledged backlash mode against the content of the victimized publication.

The global Je suis Charlie movement is quickly being replaced by a kind of Je ne suis pas exactement Charlie take. As in, yes, I believe in free speech. But…

Meanwhile, there have been conservative critics like David Brooks of the New York Times, who wrote a pointed piece entitled “I Am Not Charlie Hebdo” that attempted to throw cold water on any international attempt to lionize the “puerile” satire mag.

Brooks, in his craven, lifelong quest to be granted a permanent seat at society’s figurative grownup table, went there overtly in his explanation of why Il n’est pas Charlie Hebdo:

The French satirists, he insisted, are kids’-table people, who indulge in the kind of humor that seems funny when you’re 13. But it’s not as funny when you’re a 53 year-old centrist who teaches humility at Yale and writes unironic books about the excellent furniture tastes of the upper classes. 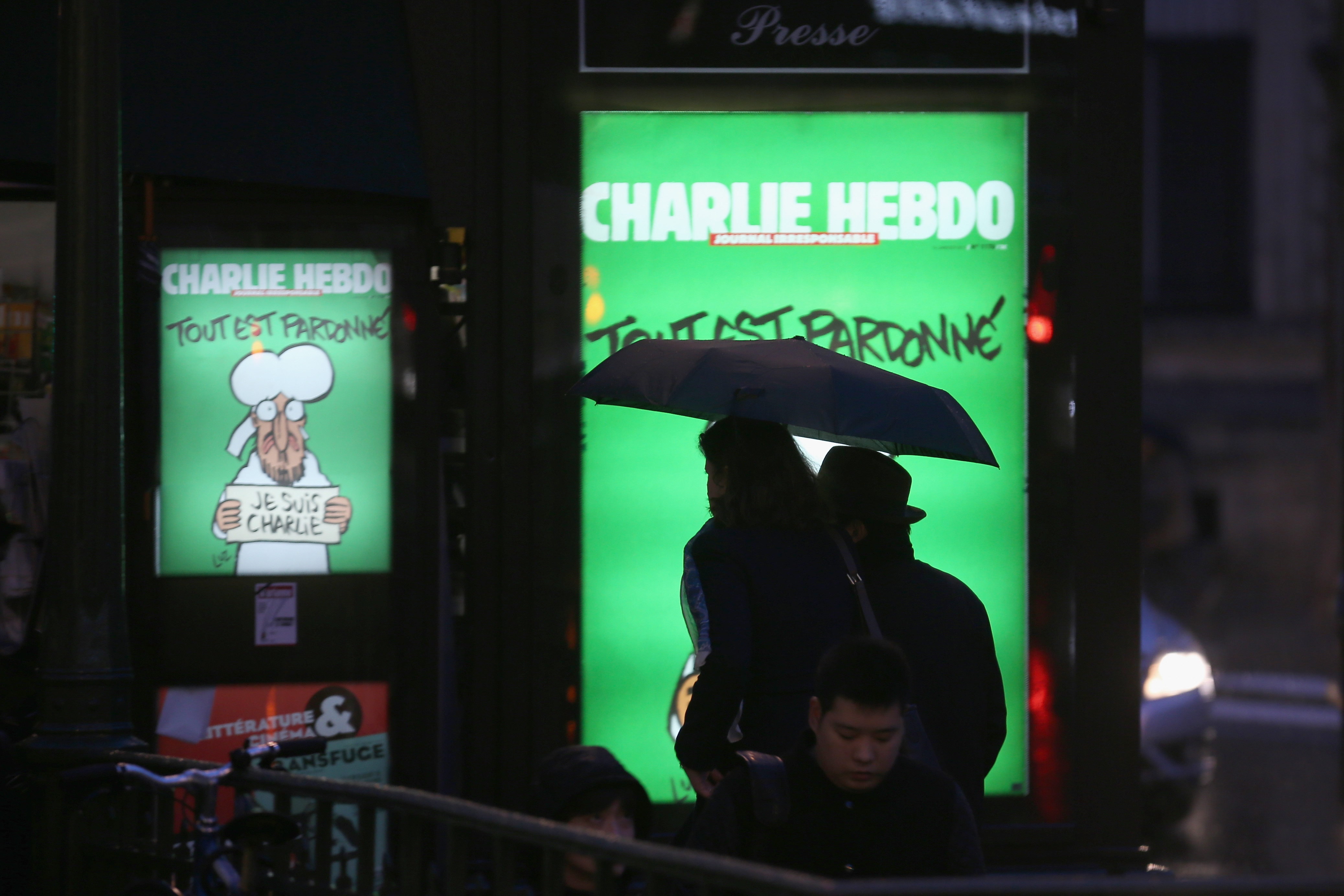 Making the oddly Papal observation that “most of us do try to show a modicum of respect for people of different creeds and faiths,” Brooks further explained:

Healthy societies, in other words, don’t suppress speech, but they do grant different standing to different sorts of people. Wise and considerate scholars are heard with high respect. Satirists are heard with bemused semirespect.

So on behalf of the grownup table, on behalf of those “heard with high respect,” Brooks noted his obligatory aversion to both terrorism and censorship, but made more sure we were all clear on a point very important to his beloved grownups: They Are Not Charlie Hebdo.

Then came a piece from the opposite direction, from Jordan Weissmann at Slate.com: “Charlie Hebdo is Heroic and Racist: We Should Embrace and Condemn It.”

Here the issue isn’t that Hebdo offended religion, so much as the fact that Hebdo cartoons undeniably employ racial caricatures that are pretty hard to defend. Weissmann writes that:

Often, the cartoonists simply rendered Islam’s founder as a hook-nosed wretch straight out of Edward Said’s nightmares, seemingly for no purpose beyond antagonizing Muslims… This, in a country where Muslims are a poor and harassed minority, maligned by a growing nationalist movement that has used liberal values like secularism and free speech to cloak garden-variety xenophobia.

So just as with Donohue, where you can see the real issue here is that the critic is a Catholic who doesn’t like seeing dirty pictures of nuns, in this case it’s a political progressive who sees Hebdo cartoons as a Trojan Horse vehicle for right-wing xenophobic politics – a bunch of white guys “punching down” at an oppressed minority using the Euro equivalent of Jim Crow caricatures.

(I’m not sure this is always the right interpretation of these cartoons – in some cases they may have opposite meanings to what these critics perceive – but my French is bad enough that I’ll stipulate the racism for the purposes of this piece).

In any case, according to Weissmann, the xenophobic message means those cartoons are to be defended, yes, but with one’s fingers pinched firmly around one’s nose, and only, only as free speech – and a sneaky, disingenuous, “cloaking” use of the cherished liberal principle at that, one that should be marginalized and condemned:

We have to condemn obvious racism as loudly as we defend the right to engage in it. We have to point out when an ‘edgy’ cartoon is just a crappy Islamophobic jab…

The Hebdo tragedy has uncovered some bizarre undercurrents in American thought. There’s an instinct to marginalize and condemn, a relentless policing of which ideas are okay and which are not, that’s become advanced in the Internet age. It’s become such regular sport that it’s no longer all that surprising when people like David Brooks turn out to have allies on the other end of the political spectrum he never knew about (there was a humorously large quantity of “I never thought I’d agree with David Brooks” comments online and on Twitter).

And there’s been a surprisingly high level of hand-wringing over the deliberate provocation of religion emanating from the working media, where if there is one genuinely religious reporter in a hundred I will eat my hat. The thing is, if journalists didn’t censor themselves on the religion question every single day, stories of Papal visits to poverty-stricken countries would regularly feature headlines like, “Man in Absurd Hat Lays Soothing Bromides On Third-World Audience in Ongoing Soak-The-Poor Scam.” But they don’t, and that self-censorship is why publications like Hebdo exist in the first place.

It’s embarrassingly obvious to say it, but in a free-speech society, outlets like Hebdo are the price we pay for choosing Brooksian respectability over honesty and debate. If we try to shun or hide ideas, they tend to pop up on the edges somewhere in garishly loud form, where we end up having to talk about them anyway, the key word being talk. These ideas don’t have to be right, they can even be very wrong, but their existence is supposed to be healthy.

This is a core principle of who we are and not a difficult one, which makes all this frantic running sideways away from a few offensive cartoons that much more ridiculous. People seem more worried about being mistaken for holding disreputable ideas than they are proud to be correctly identified as citizens of a free-speech society. Are we really all so insecure?