Last week, while I was busy becoming the winner of the Fox News “Gay Arabic Atheistic Terrorist-Sympathizing Libtard-Who-Should-Be-Shot of the Week” Award for my review of American Sniper, the very witty British journalist Felix Salmon was doing some excellent play-by-play coverage of the World Oligarchy Forum in Davos, Switzerland.

Davos is a gathering of the world’s super-wealthy and super-influential. This is a place where globe-rocking Machiavellian financial deals between kings, bankers and presidents are made behind closed hotel-room doors. But when the conspirators break, they head downstairs to conference sessions, where they can cheer Bono for saving the African poor, or shed tears for a choral performance by Indochinese land-mine survivors.

Or applaud the inspired gibberish of a master flatterer like New York Times columnist Thomas Friedman. Felix attended Friedman’s speech. He scored “a hearty round of applause” with this inscrutable passage, which Felix helplessly retweeted: 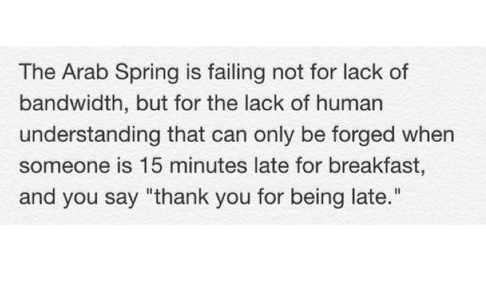 I’ve been reading Friedman obsessively for more than 15 years now and usually can translate him with some fluency, but I felt stumped by this one. It only got a little easier when Felix explained the context, which has to do with the final chapter of Friedman’s new book, a chapter called “Thank You For Being Late”:

Being important CEO types, Tom Friedman’s friends are sometimes 15 minutes late for their breakfast meetings. And when that happens, Tom Friedman thanks his friend for being late, since his guest’s tardiness has given him 15 minutes of peace and quiet, during which he can think peacefully…

What has any of this got to do with the Arab Spring? That, I’m afraid, I’m going to have to leave as an exercise for the reader. Because I have no idea.

I’m not sure anyone else did, either. When I asked readers last week to submit their own translations for a contest (the prize for the best one being an “I HEART CONFUSING” T-shirt) there was almost no overlap in the interpretations, even among the serious attempts. Among the non-serious attempts, I think there was some struggle to make jokes about the passage because it was hard to detect the idea they were supposed to be mocking.

The translation by “Geoffrey Kimbrough” was curt, to the point, a little pissed off:

The Arab Spring is failing because they haven’t read my book.

Justine Doody (@justinedoody) wrote a poem that made me wish The Cortland Review would invite Friedman to guest-edit:

you were probably saving

and the internet was down

This submission by “Allen” started slowly but actually works pretty well in the end:

There was no chocolate mint on the pillow in my hotel room in Davos last night. Even though this is Switzerland, for God’s sake, I still had the human understanding to leave a note for the staff saying, “Thank you for not leaving a chocolate on my pillow,” anticipating that the following night I’ll find two chocolates on my pillow. Which reminds me of the failing of the Arab Spring.

A number of others went with a twist on Friedman’s famous “McDonald’s Theory” of conflict resolution, which states that no two countries with McDonald’s have ever gone to war (coined in 1996, I’m pretty sure this is no longer true – at the very least, if you count the Russia–Ukraine conflict). In this case, as Erin (@parenthard) put it, “IHOP should expand into Arab nations.”

Usually Friedman contests generate a lot of porn-y retorts. This one generated only a few. The best probably involved the word “sawing,” submitted by “Bramsar”:

I spent the morning making sex with my mistress over breakfast. Really just sawing into her with my member. I’m glad you didn’t stop by. Sorry about the Arab spring, boys.

But in the end, I’m going to have to go with this entry by a seething non-fan named Vzor, which actually seems to be correct:

Poor, Matt. Friedman is obviously saying that the world views [the] Arab Spring from the point of view of a host who is expecting guests for breakfast, but who simply isn’t fully prepared to entertain them just yet. The host thanks the guests for not being in such a rush to join in the proceedings even though he is thankful that they have arrived.

Keep the T-shirt. Any gift from you would be an insult. I am only offering the explanation to underscore the fact that, despite all your haughtiness, you are pretty dense.

I guess that makes sense. Right? This just shows what a bad week I’m having, that I’m forced to give an award in my own contest to – well, I won’t use the word troll, since being right about anything obviates the term. Is there a word for a troll who’s right? A trell? A trasizzle?

Anyway, since “Vzor” doesn’t want the shirt, I’ll give it to the very first person who comments on this page. Be sure to include an e-mail address so I can find you. Until then, thanks for being late.