The Dumb and the Restless - Rolling Stone
×
×

First of all, when did it become OK for cowboys to cry in public?

The coolest thing about the Gary Cooper-Clint Eastwood-James Coburn-Yul Brynner-style cowboys is that they never said a damned thing. They walked slow, asses sore from all that riding, and kept things to a syllable or two if they could manage it: “Whiskey.” “Bath.” “Draw.”

Contrast that with Ammon Bundy, the man who recently led a small group of gun-wielding outpatients to occupy the Malheur federal wildlife preserve in Oregon.

Before the occupation, Bundy stood up at a town hall meeting in Harney County, Oregon, and fell to pieces as he described to the audience the revelation he had from God about the need to take action against the federal government. He was most put out about the five-year sentence for arson that the feds slapped on a father and son duo of ranchers named Dwight and Steven Hammond for setting fires on federal land.

Meet the Militia: The Zealots, Cowboys and 'Rogue Infidels' of the Oregon Insurgency

Bundy, his beard always carefully groomed, his unblemished broad-billed rancher hat always on straight, stood up at the town hall and weepingly explained that God had spoken to him about the Hammonds.

“The Lord was not pleased with what was happening with the Hammonds,” he croaked out. “OK?” He then wiped his eyes and — in an absolutely flawless homage to the Mike Myers I’m a little verklempt routine — held a palm out as if to say, “Hang on while I compose myself.”

“And I apologize for being emotional,” he went on. “I hope you guys can get past that!” (He wiped his eyes again.)

Bundy’s town hall speech was nothing compared to the instant-satire performance delivered by fellow militiaman Jon Ritzheimer, who videotaped himself in his front car seat weepily telling his daughters why he wouldn’t be home for the holidays. The Oscar-winning scene comes when Ritzheimer sighs, drops his carefully shaved head and carefully trimmed goatee downward (the stratospheric Men’s Health-level grooming factor is a constant in the #YallQaeda story), then collects himself just long enough to look up at his camera.

“Your Daddy swore an oath!” Ritzheimer bleats, waving a paperback copy of the Constitution in front of the camera. What’s hilarious is that you can see Ritzheimer, who just seconds before was ostensibly so overwhelmed with emotion that he “lost it” and had to gather himself, carefully spread his fingers during the scene so that the audience can see the title.

The video was instant viral comedy and inspired some fantastic parodies. “Your Daddy swore an oath!” cried John Darnielle, a.k.a. @mountain_goats on Twitter. “An oath to the naturalist, and later expressionist, playwright, August Strindburg! And, scene!”

“Daddy swore an oath!” said @PatrickGeCooper, in one of my favorites. “An oath to finally finish Jules Verne’s Mysterious Island. I’ve tried like three times! There are so many descriptions of plants, and rocks…” 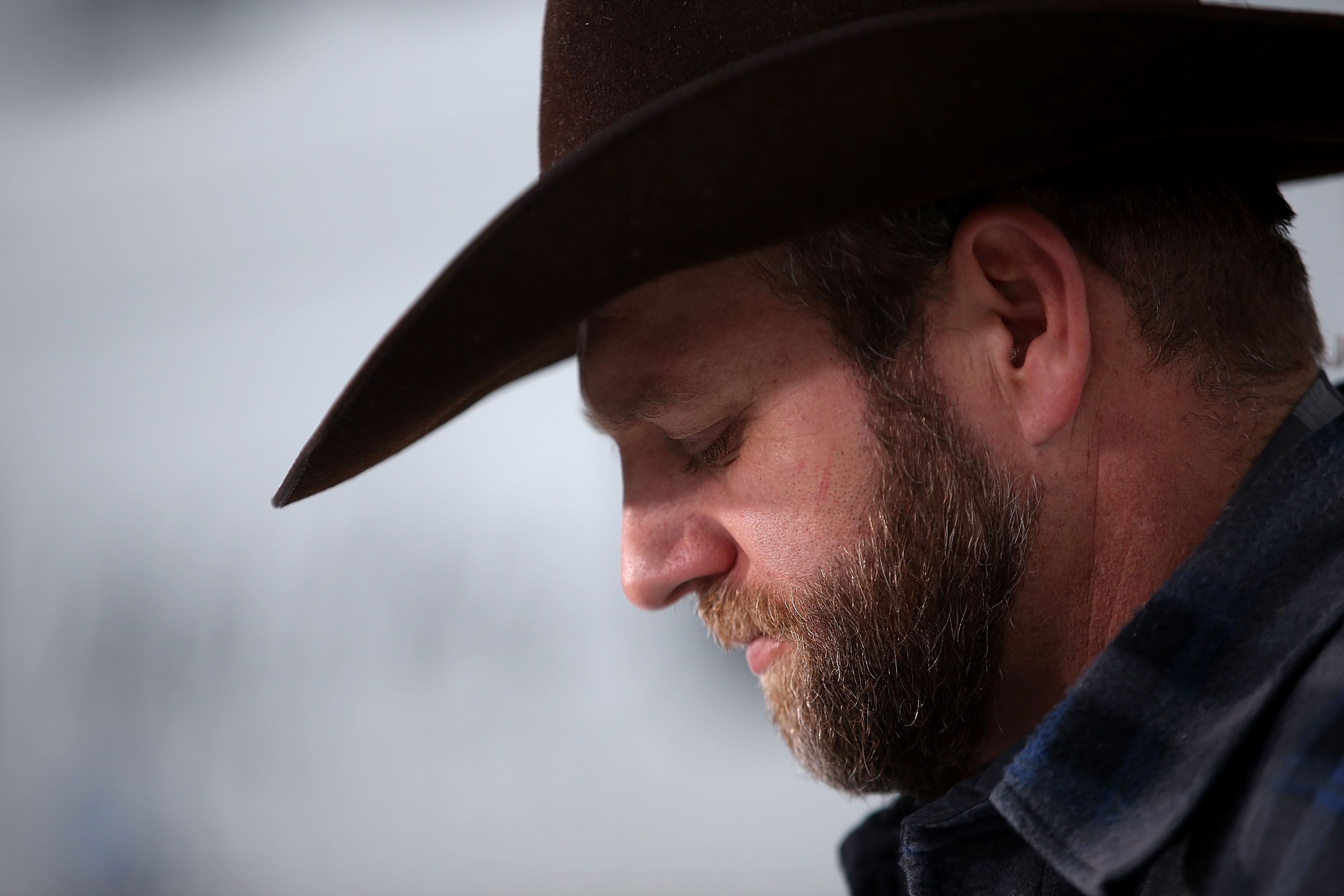 The Bundy militiamen are like a Black September version of an Iron John forest retreat: a bunch of weepy middle-aged guys who dressed up in crisply pressed outdoorswear and took over a bird sanctuary so they could play outlaw for a few days while they “worked on themselves.”

They gathered around a bonfire (there really was a bonfire) and presumably engaged in Robert Bly-style mythopoetic healing, getting back to their manly roots by stroking their rifles, wearing camo undies, and complaining about all the wrongs done to them by women/the federal government/wild birds/whoever.

About the camo: yes, the following actually happened. One of the militiamen, Melvin Lee, posted a video on Facebook (these guys are on social media more than most teenagers) where he complained about the popular misconceptions of the movement. “There’s nobody in camouflage,” said Lee, who was wearing a camouflage jacket. “Well, except for my jacket.”

And yes, it did happen that Ritzheimer, who did remember to bring his paperback copy of the Constitution, actually sent out a tweet asking for care packages for things his compadres forgot to pack for their armed dude-seminar. They asked for socks, snacks, energy drinks (!), equipment for cold weather, snow camo, and “gear.”

This was after Bundy had told reporters that the group was prepared to stay for “years” and had enough supplies to see them through. “We have food planned and prepared,” he said.

The group’s decision to start begging for snacks almost immediately after boasting of their preparedness inspired still more hilarity on the Internet. This clever person re-imagined the classic “Don’t Tread on Me” flag to read, “Please Send Snacks.” A Reddit group then heatedly discussed what snacks to send, concluding that “they should have brought the big-sized party mix chips” and suggesting donations of things like sugar-free gummy bears, diapers, Funyuns, cheese omelet MREs, and glitter.

Every time these people open their mouths, it’s comedy. Earlier this week Bundy gave an interview to CNN in which he tried to play up the “We come in peace” meme they’ve been pushing from the start. Like the “nobody’s wearing camo except the camo I’m wearing” line, “It’s a peaceful protest, except for the rifles which we won’t use unless we have to” is also high comedy, although not a single person in the group seems to realize it.

Sounding exquisitely reasonable Wednesday, Bundy said, “There is a time to go home. We recognize that. We don’t feel it’s quite time yet.”

Except Bundy will not be going home, after all. His next stop, if it’s not the afterlife, will almost certainly be in a cell next to serial poisoner Michael Swango, or Richard Reid the shoe bomber, in the supermax in Florence, Colorado. There will be no snack shortage there, although he’ll be getting them through a slit in a door. Maybe they’ll let him take up macramé? 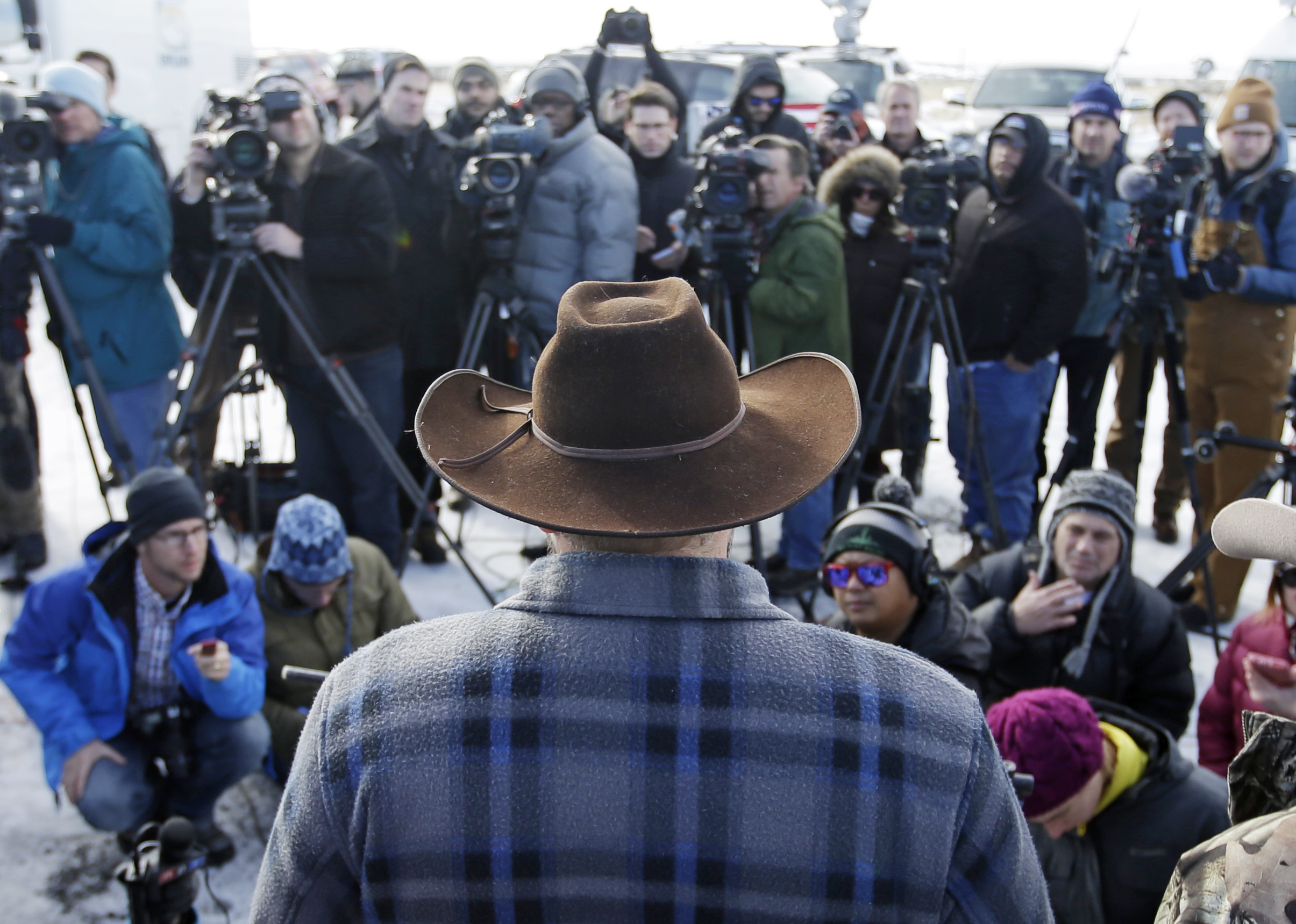 Bundy seems not to get this, however. He’s convinced that this will all get worked out, as soon as the federal government releases the Hammonds from prison (what is this, a list of demands from Hezbollah?) and hands over a healthy swath of federal land to private ranchers. “We need to make sure that there is some teeth in these land transfers,” he said confidently.

It has been suggested that it’s somehow wrong to laugh at the Y’all Qaeda/Vanilla ISIS movement. “The idea that satire… can serve as a bulwark against far-right ideas is provably false,” writes Natasha Lennard at AlJazeera.com. She goes on to point out that the paranoia and xenophobic racism of people like Bundy are not funny, and neither are the redneck caricatures that have spilled across the Internet in the last week as this “siege” played itself out.

“Satire that deploys classism to skewer racists and conservatives is certainly such a worst case,” she says. “Why not focus on their very real, very frightening beliefs?”

There’s no doubt that these people are dangerous, but their ridiculousness is a huge part of who they are. Incidentally, this is true of groups like the actual al-Qaeda, too, led as they are by men in beards and Rick-Perry-style “smart glasses” who play at being religious scholars and intellectuals when in fact they are the kind of people who are afraid of cartoons and lie awake at night wondering if it’s permissible to play chess with a menstruating woman. Just because a person is dangerous does not mean he’s not also absurd.

The Bundy militiamen are an extreme example of a type that’s become common in America. Like the Tea Partiers, they seem to not only believe that they’re the only people in history who’ve ever paid taxes, but that they’re the only people who were ever sad about it. What they call tyranny on the part of the federal government just means putting up with the same irritating bills and regulations and other crap that we all put up with, only the rest of us don’t whine about it in the front seats of our cars while posing in front of tripods.

Again, these people may be dangerous, but their boundless self-pity, their outrageous sense of entitlement and their slapstick incompetence as rebels and terrorists are absolutely ridiculous. Sure, it may not help, but how can we not laugh?