Take a look at the graph below.  It tells a story of two very different time periods: one when the incomes of all American families grew at roughly the same rate; and one when the wealthy started leaving everyone else behind. 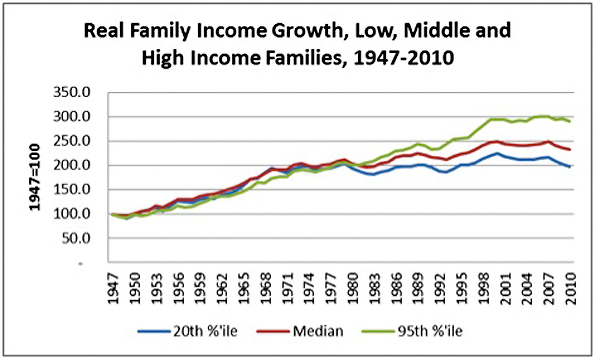 From the late 1940s through the late 1970s, real incomes for low-, middle-, and high-income families doubled.  Since then, income growth at the middle and bottom has been pretty much flat, with the important exception of the mid-1990s – of which more in a moment.

High incomes rose more consistently after the late 1970s. (I know, the high-income line looks flat in the 2000s. That’s because these data exclude income from selling assets that have grown in value (capital gains), an increasingly important income source for wealthy families. With capital gains factored in, the line would show a much steeper rise.)

What explains such a stark divergence?

No single thing, of course.  But a major contributor was full employment.  I’ll explain what I mean by that in a moment, but the fact is that it was there in the period of broadly shared gains, and rare in the period of fast-growing inequality.

Full employment describes a labor market where the number of job seekers and job openings matches up very tightly. It doesn’t mean there’s zero unemployment; even in the very best of times there will be “frictional” unemployment, as people move around between jobs, or take some time trying to upgrade to a better job.

Economists define full employment as the lowest unemployment rate consistent with stable inflation.  Right now, according to the Congressional Budget Office, the nonpartisan scorekeeper of fiscal matters for the nation, that corresponds to a jobless rate of 5.5 percent, about three percentage points, or over four million jobs, below the current rate.   The idea is that unemployment below that level will trigger what economists call a wage/price spiral, where higher wages push up prices, which further inflate wages, and on and on.

Other economists agree that a tradeoff exists between unemployment and inflation, but differ on what the magic number should be. In light of that, our best bet is to try to get the rate down as far as we can and carefully watch the price and wage levels.

What really matters is how full employment – or its absence – plays out in the lives of working families.  In an economy like ours, where unions are relatively weak, and where forces like globalization and technical change reduce the bargaining clout of the 70 percent of the workforce that’s not college educated, full employment is the best, if not the only, friend of the working class. That’s because the lower your income, the more full employment helps you.

Moreover, when I look at the statistical relationship between periods of tight versus slack job markets, I find that for every point the unemployment rate was below full employment, low incomes went up 1.3 percent per year in real terms, middle incomes went up 0.8 percent, and high incomes were unaffected.

That last point – that the incomes of the wealthiest families are statistically uncorrelated with full employment – might surprise you.  But think about the current recovery.  The unemployment rate has been way too high for way too long.  Yet what growth there’s been has bypassed low- and middle-income families on its way to the top of the scale.

One exceptional period – an exception that proves the rule – was in the latter 1990s, when the economy operated well below full employment for a few years.  And as the figure reveals, real incomes grew significantly in those years, and not just at the top of scale.  Poverty rates fell steeply, especially for the least advantaged families, many of whom found gainful employment at rising wage rates.  That hadn’t happened for decades before and it hasn’t happened since.

Whenever I go on about the critical role of full employment in generating more equitable economic outcomes — and I do so every chance I get — there’s often a lot of head scratching in response.  Isn’t that the point of economic policy, people ask – to push for the lowest possible unemployment rate?

Actually, no.  Policy makers find lots of reasons to not go there.  In some periods, the Federal Reserve has been too busy tilting against inflation and not concerned enough about under-employment.  Then there’s the boom/bust cycle, with jobless recoveries that drag on for years. (Back in your grandpa’s recessions, we used to regain the jobs lost to the downturn more than twice as fast as we do now.) And of course, these days we have wrong-headed austerity measures focused on the budget deficit instead of policies focused on the jobs deficit.

So, how do we get closer to full employment?

One obvious answer is to tax the rich and use those revenues to help groups who’ve been hurt by all this labor market slack, say through job creation programs or wage subsidies.  But while we unquestionably need more progressive taxation to meet our revenue needs, this is a band-aid, not a long-term solution.

Instead, in times of elevated joblessness, like the present, stimulus measures such as infrastructure investment and fiscal aid to states could help get us closer to full employment.  Aid to states is particularly important in preserving decent middle class jobs that are both important to the teachers and police who hold those jobs as well as to their communities.

In normal times, we need a Federal Reserve that weights the full employment part of their mandate at least as heavily as the price stability (inflation) part, and given the rough economic outcomes for most families in recent years, the absence of full employment, and the subsequent increase in inequality, I’d say “more heavily.”

Unfortunately, even as we climb out of recession, some in the Fed are trying to hit the brakes to stave off a phantom inflationary menace.  That’s an excellent way to keep full employment at bay, and to ensure that growth remains a spectator sport for most working families.

Some disadvantaged groups of workers never get anywhere near full employment, even in a strong recovery.  Sectoral job training, which prepares them for locally-demanded jobs, can help, as can targeted wage subsidies.  During the Recovery Act, a temporary wage-subsidy program helped employ hundreds of thousands of less-skilled workers in cities across the country, and at lower cost than other job creation measure in the stimulus.

But the key point is that we’ve got to act now to make full employment a national economic goal.  The economic expansion that began a few years ago is only just beginning to be felt by average folks, yet most of the growth is failing to reach them.  Whether we’re concerned about fairness, living standards, or even about keeping our social fabric from tearing apart, we can’t afford another economic expansion that leaves most of us behind.  Full employment must be part of the solution.

Also by Jared Bernstein
• The Economy: What’s Wrong and How to Fix It
• How to Build a Fairer Economy
• What Obama’s State of the Union Got Right
• Jobs Report: Good News, but a Long Way to Go
• It’s (Almost) Time to Raise the Minimum Wage
• Reasons to Like Obama’s Budget
• Why Manufacturing Matters
• Obama’s Corporate Tax Plan Calls GOP Bluff
• Gas Prices Are Up, Gas Price Pandering Is WAY Up