It took about five seconds after I started soliciting mailbag questions for my inbox to start filling up with UVA letters. “Hey, doucheface!” wrote one reader. “Enjoying your newfound lack of credibility? Oh, wait, you never had any!”

Channeling Hal Holbrook, a clever film-lover wrote: “You guys made people feel sorry for Goldman, Sachs and General McChrystal. I didn’t know that was possible.”

Then there were more, like this one from ‏‪@inturdnet:

Do you miss working for more reputable publications like the eXile, or do you think covering college shenanigans > exposing Putin? 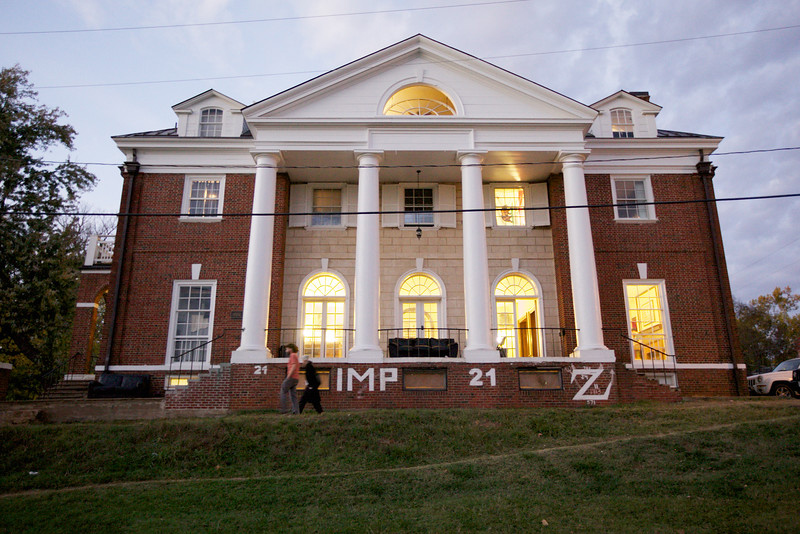 Last weekend, I said some things on Twitter about the UVA story and about my own very positive experiences with the Rolling Stone fact-checking department, which has always been thorough and saved me from embarrassment countless times. Frankly those tweets didn’t go over well. I get why, obviously. People are pissed right now and they don’t want to hear war stories about how tough the research process is here.

The thing is, that’s all I’ve got. I’ve been with the magazine for 10 years and on my end, it’s been mostly the same people and the same process all along. I don’t have any special insight into the UVA mess except to say that whatever went wrong, it seems like it had to be a serious departure from the way they usually do things around here. I know how that sounds right now, but the Rolling Stone I know is a top-flight long-form reporting operation and was for decades before I even got there. And like everyone else connected with the magazine, I’ve been shocked and depressed by this whole situation.

In the meantime, on to less nuclear material:

Your articles laced with “fuck bombs” are gone from the Internets. You disappeared them, didn’t you?

I was wondering when someone was going to notice that I’ve pretty much stopped the profanity. I was turning into the literary version of the “Old Guy at the Club” routine. I’ve decided to move into the George Will phase of my career, which means replacing f-bombs with folksy baseball references and lots of fence-straddling, “Right or wrong? Only time will tell…” opinionating.

How about a link to the Holder memo declaring a no-prosecute policy?

Have at it. Here’s a link to “Bringing Criminal Charges Against Corporations” from June 16, 1999.

For what it’s worth, the memo does not exactly say not to prosecute. It just talks quite a lot about what factors a prosecutor may consider when deciding whether or not to bring charges. The most important part is section IX, “Collateral Consequences,” which talks about the “possibly substantial consequences to a corporation’s officers, directors, employees, and shareholders, many of whom may… have played no role in the criminal conduct.”

So the basic idea is that if you think innocent bystanders will suffer unduly because of a prosecution, you can consider that and pursue non-penal alternatives. The problem with that, of course, is that with a giant company like UBS or HSBC, you could make the argument that the entire world will suffer if one of those companies crashes and causes a global financial catastrophe, and therefore prosecutions should be avoided. This is basically what they’ve been arguing and that’s why there are so few cases.

In light of the torture report can you do a Venn Diagram of the current state of US vs. Russia?

That is a fantastic question, a great thought experiment. I sent it around to a bunch of my former Moscow expat friends. Here’s what we came up with. 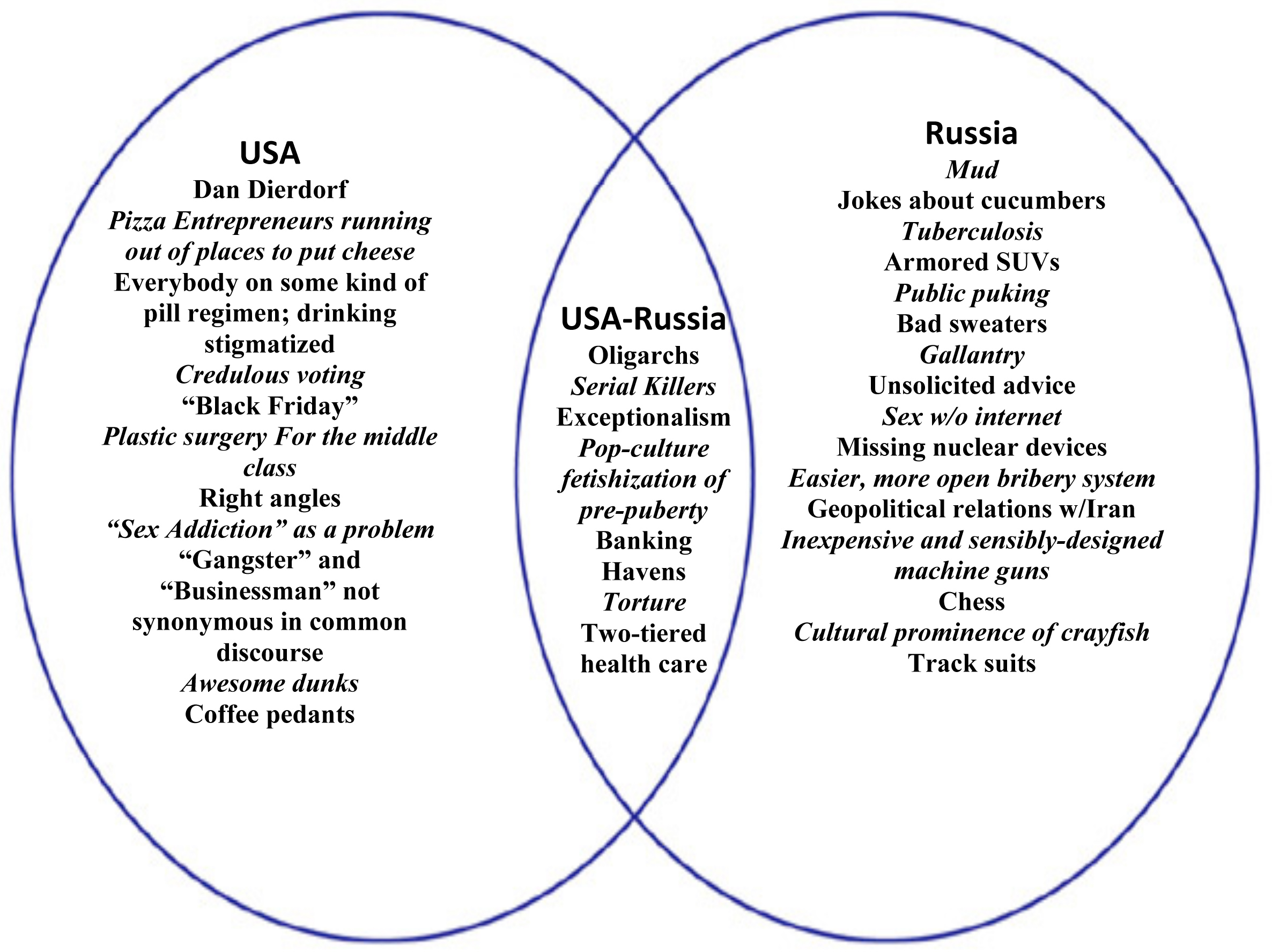 You seemed angrier in Griftopia than in the new book. Is it easier to be angry when you have someone to be mad at?

Really? I didn’t think The Divide was less of an angry book. I honestly think I just swore less.

I’ve noticed you have a very flat head. Do you have issues with helicopters landing there?

My baby son Max is fascinated by my flat/balding head. Every time he sees it he laughs mercilessly, which everyone in my family but me finds hilarious. It could be a bad early sign of a future as a satirical columnist. I hope not for his sake, but it’s amusing.

Would your head explode if the Rams sign RGIII in the offseason?

That would be the most Daniel Snyder thing to happen, ever, in the history of Daniel Snyder. Basically the whole current Rams team is made up of RGIII-trade-originated draft picks, right? I would definitely laugh, although to make it truly extra-level funny RGIII would have to regain form after the move, which I’m not expecting.

How come you’re not in hiding?

See the next question.

Has the US government ever tried to silence you or criticize you for reporting on its failure to criminally prosecute Wall Street?

Back when I lived in Russia, I knew lots of reporters who really did risk their lives and had enemies who really did violently attempt to silence them. I had one Russian reporter friend who wrote something about a bank connected to one of Yeltsin’s advisers, and two days later a thug in a ski mask literally jumped through his bedroom window and bopped him over the head with a crowbar. I vaguely knew people like Anna Politkovskaya and Yuri Sheckochikhin, famed reporters who were literally murdered because of their work. Even I had to skip Moscow once, after a certain mob-connected pimp had a bit of a sense of humor failure about a thing we’d published in the eXile.

But in America, nobody needs to silence journalists, particularly if you’re talking about just one journalist, and more particularly if it’s just one print journalist. Ignoring such people is easier and way more effective. You just let the reporter throw whatever hissy-fit he/she has decided to throw, and five seconds later the main audience will be back porn-surfing and watching football and “Wives With Knives” and so on. The notion of the dangerous dissident who so threatens the corrupt state that he or she must be physically eliminated is unfortunately an old-fashioned fantasy that no longer fits our sophisticated dystopia. Or anyway, even if such a person did exist, it would be someone with better sources than me.

Do you think there’s a way to actually prosecute someone, anyone, for at least some of the Wall Street crimes?

I do, and that’s why I was so excited about the story I got to do with JPM whistleblower Alayne Fleischmann (“The $9 Billion Witness,” Nov. 6). If they want to, they have cases they can make, and witnesses like Alayne they can call. Despite the propaganda about how hard these cases are, and how the financial instruments involved are too complex for juries to understand, the actual crimes, particularly crimes like securities fraud, are childishly simple to grasp. Like in the Chase instance with Alayne: if the company knew the home loans they were selling were troubled and didn’t tell the customer, there’s your case right there. It’s not that tough to prove. It’s really just a matter of whether the Justice Department feels enough public pressure to go into court against some of these targets, and it’s clear by some of the recent settlements, like the $8.9 billion settlement involving the French bank BNP-Paribas that included a criminal charge against the company, that they do feel this pressure. They haven’t gotten to the point of charging actual human beings yet, but you never know. It could happen.

What do you think of the new trend in psychology of prescribing supervised ketamine trips to break people out of depression?

I don’t know anything about it, but it sounds awesome and I want to try it as soon as possible.

Do you think you understate the Federal Reserve’s role in enabling all of the grift on Wall Street?

I hope not! I’ve written a lot about the Fed’s role in the current messes, how Too Big To Fail wouldn’t be possible without the basically limitless supply of free money, and so on. The model of bubble economics that allows the financial services industry to continually create huge Tulipomanias that inflate and then crash (but not before gazillions in fees are churned out of the pot) wouldn’t be possible without the Fed pumping money into the system after each collapse. There’s even a whole chapter in Griftopia on the subject (organized around the life of Alan Greenspan, it’s entitled “The Biggest Asshole In The Universe”).

Good God, what would they call that? “Ass Nog?”

What’s the etiquette for journalists outing anonymous sources that lie to them? Eg NFL, CIA, etc.

The only rules that govern any of this stuff have to do with how it will look to other potential sources in the future, which impacts whether anyone will ever talk to you again. My take is that you never out any source that asks for anonymity, because if he/she lies to you and you get burned because of that, that’s your own fault for not checking. I realize the irony of me saying this at this current time.

Hi Matt! I realize this is a little inside baseball, but would love to hear your version of your departure from 1st look/Omidyar?

How much would it take to snitch on ‪@The_Intercept? “I signed an NDA” also a valid answer.

Maybe someday I’ll get into it, but it’s not the right time. By the way, the fact that I’m keeping quiet has nothing to do with any NDA. It’s just that it’s a bad situation that I think can only be made worse by more talk.

It’s too bad, too, because a lot went on that wasn’t ugly and was just flat-out funny/bizarre. I know there are many FLM vets who are already mourning the Liar’s Poker-type comic tell-all book that will probably never be written. If someone does write it, I really hope the Farrelly Brothers make the movie. For instance, I’m imagining a scene where just before an all-company meeting, a dozen journalists lay action on how long it will take their CEO to use the phrase, “As you know, I’m a technologist.” The winning bet? A minute and forty-five seconds.

I didn’t understand this question at all, but that didn’t stop me from being really entertained by it.