But circumstances intervened, and now I’m forced to declare one winner. We had a submission so inspired and impressive that it’s going to require a more serious prize than a simple mug. I think the logical choice, if I can negotiate a decent price with the artist (we’ve done business before), is Geoffrey Raymond’s* “It’s a 401(k) World,” a painting inspired by Friedman’s work.

The actual winning submission requires a small explanation. In the meantime, we’re still handing out mugs to the other four top entries. In order, they are:

• @fsimmons, who seems to be the first person to have come up with The Next Six Inches Are Critical, which was overwhelmingly the favorite with readers. In fact, it might have been the outright winner, had, well, circumstances not intervened.

• @rollotomasi3030‘s Longitudes and Shat-on-Dudes was my favorite homage-to-an-actual-Friedman-title, so it gets a mug. Close but not quite earning the proverbial cigar were It‘s a 4nik(8) World, Hot, Flat and Pounded and one very late, cleverly blunt submission, Iran‘s Greatest Weakness May Be Her Vagina.

All four of you Twitter entrants, please write to taibbimedia@yahoo.com with your mailing address so we can get you your mugs.

As for the grand prize, it’s really no contest. The winning entry came in last Sunday morning, and once it came in, even many of the readers who had entered the contest with their own painstakingly-thought-out ideas bowed out, realizing they’d been beaten soundly.

The winner, of course, is Thomas Friedman himself, whose very next column after this contest was announced was entitled, “This Ain’t Yogurt.”

“Jesus Fucking Christ,” noted a friend, impressed. “This Ain‘t Yogurt is more obscene than anything a mere commentator could think of.”

“He took your contest,” noted another “friend” of mine, “and shoved it right up your poop-chamber.”

The column is, depressingly, a masterpiece of the genre:

An Arab friend remarked to me that watching the United States debate how much to get involved in Syria reminded him of an Arab proverb: “If you burn your tongue once eating soup, for the rest of your life you’ll blow on your yogurt.”

Readers are welcome to do their own research to find out what’s soup and what’s yogurt in this story. Painful as it is to admit, it’s worth it. Friedman was in such a zone with this piece, he even double-midwifed the body of the article (there are two different “midwife” metaphors), reaching new heights with this passage:

But, to do that, they need either an external midwife to act as a referee between all their constituent communities (who never developed trust in one another) as they try to replace sectarianism, Islamism and tribalism with a spirit of democratic citizenship or they need their own Nelson Mandela.

He has to be consciously sticking it to his critics here by throwing a striped referee uniform on his already-crouching midwife, there’s really no other explanation. Anyway, it’s the best soup-yogurt-midwife-referee-next Nelson Mandela-removing the heavy lid of authoritarianism column ever written. And the title is the clear winner of this little contest. Let that be a lesson. You mess with the bull, you get the antlers . . . 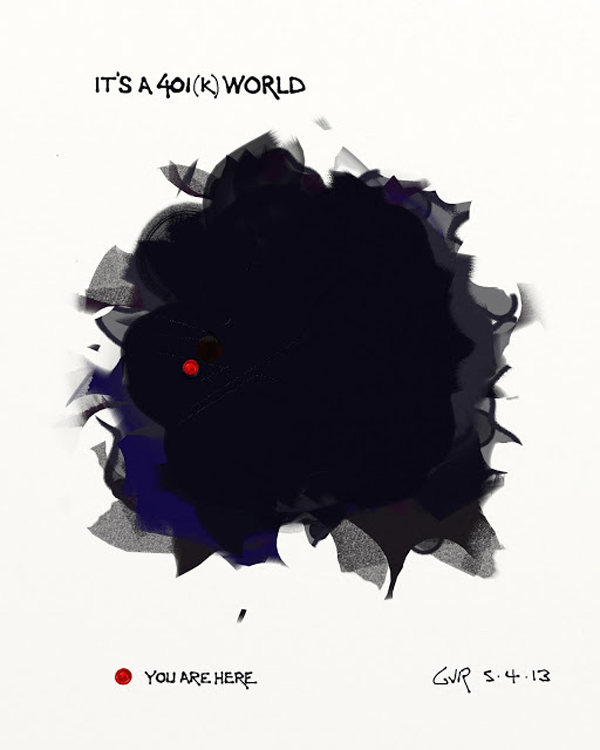 * Editors’ Note: Best known for his brilliant “annotated” portraits of Wall Street figures like Dick (The Gorilla) Fuld, Ben Bernanke, and Vik Pandit, huge grotesques marked up all over with acid comments from passing pedestrians. I have two of Geoff’s prints on my office wall, one of the Gorilla and the other his outstanding Lloyd Blankfein (complete with notes like GIMME MY MONEY BACK!! and YOU GREEDY BASTARD! And ROBESPIERRE SENDS GREETINGS). Check out the rest of the “Map” series here.