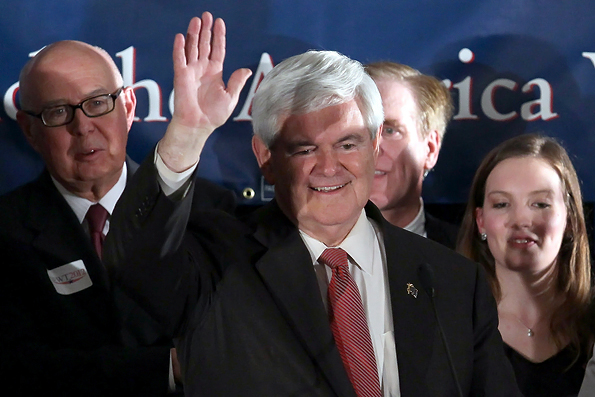 Back from Columbia, South Carolina after an interesting weekend, to say the least. So many things to say about South Carolina and this race in general, but I have to bite my tongue a little because I’m filing a magazine piece about it.

But I will say this: Before this past week, I was completely disgusted with the campaign story and was dreading having to cover it. Now, however, I have to admit to being seduced by the sheer entertainment value of this spectacle. It’s been years since I laughed as much as I did last week in South Carolina. This election is the best TV comedy since my hero Chris Morris’s “Brass Eye,” and it was an honor to be in the studio audience.

Anyway, it looks like our poster contest was won by one Les Johns. Les, can you write to us with an address? Les’s guess for the final results was as follows:

He gave Romney a few too many votes, but otherwise he was very close, got the order right and everything. So he gets a signed “Starve the Squid” poster by the inestimable artist Molly Crabapple, who has a new painting out that I’ll be posting later this week.