I first met Denis Martinez late last summer. A mutual friend brought me up to Sing Sing, the infamous “Big House” prison that just as infamously sits “Up the River” from Manhattan.

A 29-year-old native of the Dominican Republic, Denis is up there finishing a 13-year sentence for a non-lethal shooting he committed in New York back in his teens. When I met him, he had a year to go. (Now it’s a matter of months.) At the time, I was looking for an inmate willing to work as a columnist for our doomed Racket website.

Denis Martinez grew up in the South Bronx and Washington Heights sections of New York. As a teenager, he’d had only a few minor, quality-of-life style brushes with the law (including driving a motor-scooter without a license) before a fateful night over a decade ago in which, after a night of partying, he fired a gun out of the window of a car in a dispute between two groups of people who were hanging out in Fort Tryon park.

The bullet hit a young man in the leg. Denis shortly thereafter was tried and convicted for aggravated assault, and given that 13-year sentence. Absent some extraordinary intervention, he will be automatically deported to the Dominican Republic upon the completion of his term next August.

I first met him this past August, when a friend of his brought me up to the Sing Sing visitor’s lounge, a sweeping gymnasium-sized room in which the mostly nonwhite relatives of inmates share bittersweet vending machine meals over a surprisingly beautiful view of the Hudson river.

Denis is a soft-spoken young man of medium height and build, clean-cut with deep brown skin and a shaved head. He smiles a lot and has an easy, patient, almost fatalistic manner about him. In our first meeting, I got the sense that he went through the remorse phase a very long time ago and has long since moved on to learning to survive and make sense of his situation.

Denis is known throughout the prison for having finished its college program (he has a Bachelor’s and a Master’s Degree), for excelling in International PEN prison-writing competitions and most notably for his artwork.

He makes incredible, carefully rendered portraits of iconic historic and political figures like Sojourner Truth and Sitting Bull and Malcolm X. When I first saw these pictures, I’ll be honest, I thought they were good, but I didn’t see what was so terribly special about them. Then his friend asked me to take a closer look. I did and was shocked to learn that his pictures were made entirely out of ink fingerprints, an insanely time-consuming and interestingly symbolic genre Denis seems to have invented.

He even made the New York Times last month when intermediaries abroad delivered his fingerprint portrait of the three crosses at Golgotha to Pope Francis, who in turn sent back a rosary and a promise to keep the Sing Sing inmates in his prayers. Denis is not so much of a Catholic, but he was overwhelmed to have received the attention of the Pope. “I couldn’t believe it,” he says now. “I never expected anything like that to happen.”

But in his unit at Sing Sing, Denis is respected for another reason. He keeps a current Almanac in his cell and has become something akin to the human Google search of his unit. At night, when the inmates watch the news on TV and argue about current events, they turn to Denis to be the arbiter of factual disputes. It’s a respected job that he fulfills with relish and a lot of humor.

“You’ll hear every kind of opinion up here,” he says. “It ranges from the absolutely crazy and ignorant and racist to the very thoughtful and insightful.” He pauses. “But the thing is, people take these discussions seriously. There’s not a lot to do except think about things. So there’s this lively debate and discussion about everything on TV. Outside, people probably just sit on the couch and pass the time when the news is on. Not in here.”

As he told me about this, Denis and I formed a plan for an opinion column that would be about these nightly cell block debates around the TV. It would be a kind of diary of his last year of prison life based around the daily “action” of watching the news with the other guys in his block. 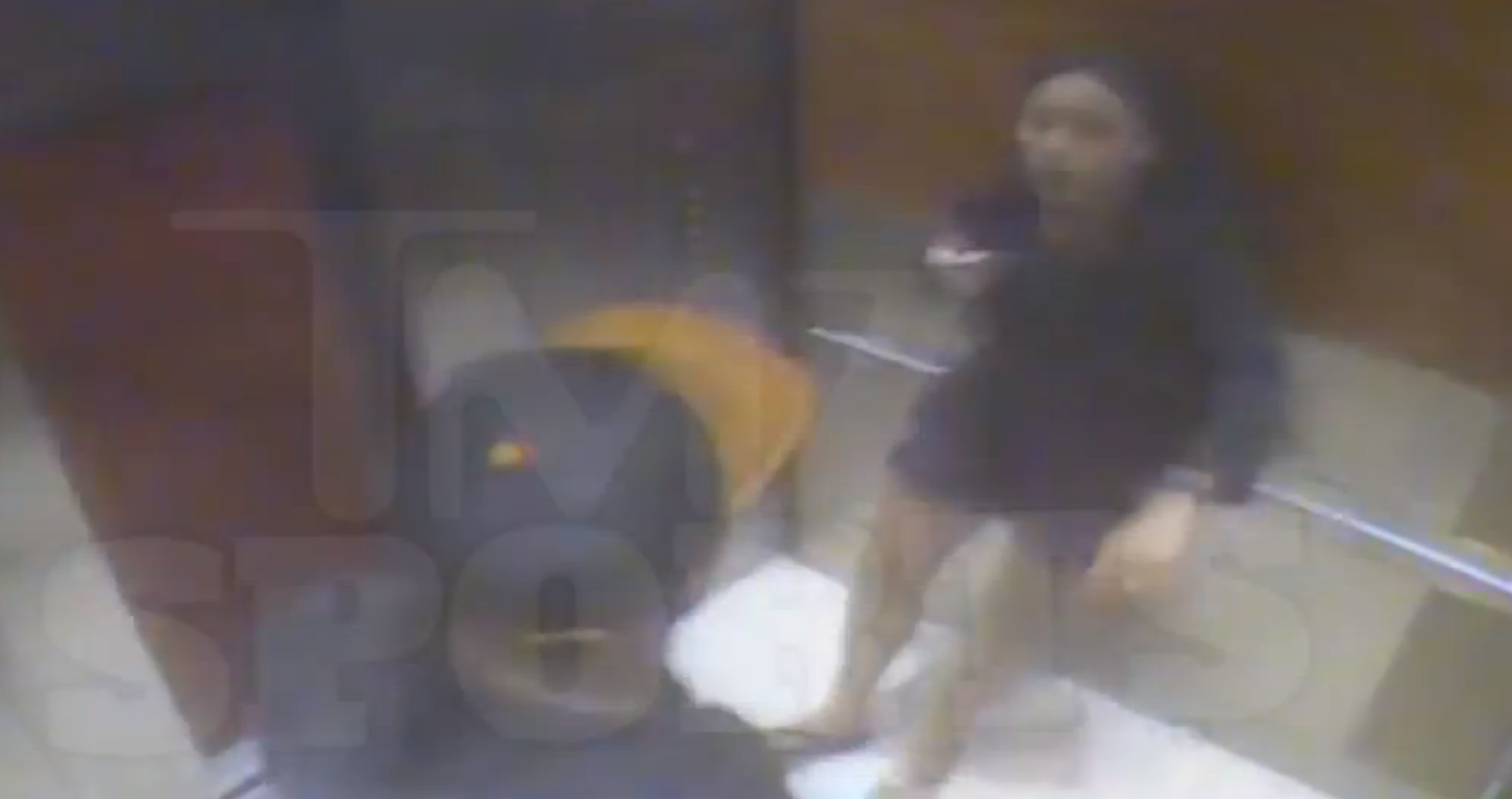 Way back on September 10th, he sent in a piece about the Ray Rice case that included the reaction of all the guys in his wing to the infamous video:

“I wish any motherfucker would punch my lil’ sister like that,” says Ricky, tying his dreadlocks together. “I’ll have to catch a body and do this bid again.”

In the piece, Ricky then boasts that Rice wouldn’t have gotten away with what he did if his girlfriend had been Jamaican, because “a Jamaican gyall would’ve stabbed his ass.” Right away, one of the other prisoners fires back.

Almost choking on his coffee, a laughing Dorian taunts Ricky. “A Jamaican chick would’ve gotten knocked out and then deported. Now, an Italian chick,” he continues, “would have gone home and killed his black ass the next day.”

Anyway, Denis worked hard at developing characters like Ricky, a dude nicknamed Brain Dead, the somber Muslim theorists Ali and Musa (who had some strong feelings about Gaza and ISIS), and others. We exchanged letters about it in the fall and his first pieces were weird and upsetting and often very funny.

Then Racket blew up, and Denis lost a job. Separately, we were both really bummed. I felt particularly badly because he had worked so hard at learning the new genre. He’d even submitted to the indignity of learning what a “lede” is.

But then a few weeks back I asked the editors at Rolling Stone if Denis could do something on the magazine’s website. They were good enough to agree.

So I went back up to Sing Sing just before Christmas, and over some truly atrocious vending-machine coffee we hashed out a new format.

It would be a little like the old concept, based around the guys in his wing watching the news, except we’d do it this time in the form of a personal correspondence.

We discussed what might be a good subject to start with and settled upon the murders of New York police officers Henry Ramos and Wenjian Liu. Ferguson, the Eric Garner case, and the ensuing protests were major, much-discussed events in the prison population, and news of the Ramos/Liu murders hit the Sing-Sing population like a tornado.

As he explained, there were all sorts of opinions about the murders, but overall, the reigning feeling was one of sadness and disappointment. He said it was complicated and that he would explain it all in his first letter.

It arrived just before Christmas and after a few logistical road-bumps, I’m finally able to print it. If it works out, Denis and I are going to write back and forth some more, perhaps with readers chiming in, and I’ll publish his letters as often as I can.

A disclaimer: I know Denis committed a serious crime and I in no way want to diminish or make light of that. I don’t believe he would want that, either. Also, he’s his own person and I don’t take responsibility for his opinions, any more than he does for mine.

Anyway, here goes. Incidentally, I think his next letter is going to be about the gallery’s reaction to the Charlie Hebdo massacre. For now, many weeks late, here’s the reaction from Sing-Sing on the Ramos-Liu killings.

The gallery this week has been awfully quiet compared to how it was just a few days ago. When those two cops were killed, the excitement over the “I Can’t Breathe” and “Hands Up, Don’t Shoot!” marches seemed to die with them. It’s as if all the air has been sucked out of our lungs. Even Ricky’s usual anti-authority rhetoric has cooled.

For weeks before this Saturday [when Liu and Ramos were killed], we’d been glued to the news outlets to cheer the national movements against police brutality. Every time a new city erupted in protests, the whole gallery equally erupted in cheers, as if the protesters in Staten Island or Ferguson were able to hear our encouragement. 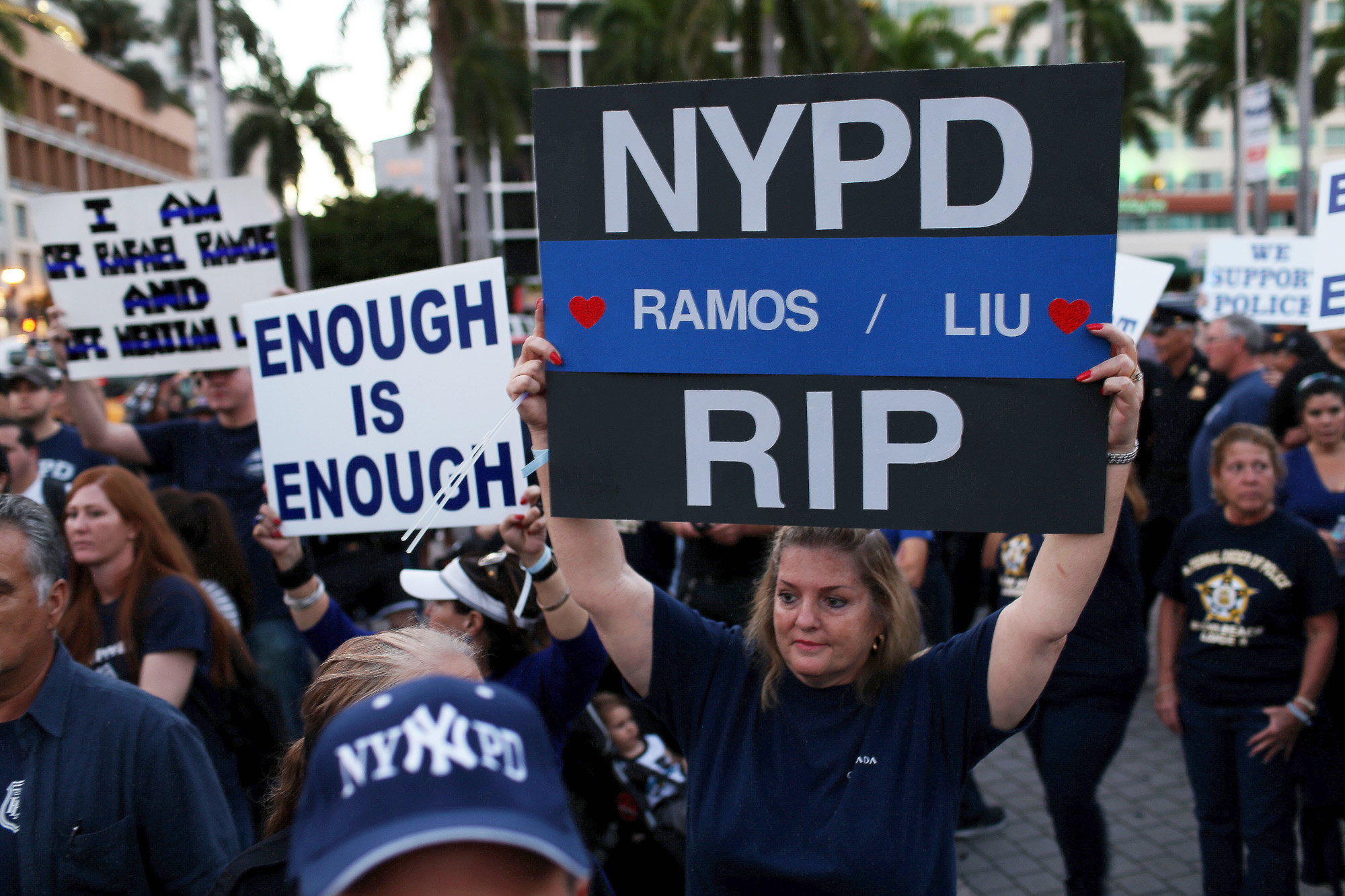 Besides the Occupy Wall Street movement several years ago, this was the first time in more than a decade that I’ve been in prison that there has been a major protest against what I call the machinery. Even I, who often complain about my complacent generation (millenials!) and always say I was born in the wrong era (I’d have fit in better with the activist Boomers), was filled with a sense of pride when I saw so many twenty- and thirty-somethings participating in “die-ins” and getting involved with good ole civil disobedience. Thoreau would’ve been proud.

But now, the only recurring comments I hear from the prisoners in the gallery are those of lament, despair, and general condemnation of the young (black) shooter. The observation all these comments have in common is that the shooter was crazy. There’s no way a person with sound mind, they say, would be dumb enough to think that killing two cops would in any way advance the movement. Even Ali and Musa, who are usually the apologists of many Muslim extremists, were praying the guy wasn’t Islamic.

Most of us in the gallery have been direct victims of police misconduct and have reasons to mistrust or resent the NYPD. We may have been constantly stopped and frisked, arrested unnecessarily, assaulted in the process of being arrested, or even roughed up in a precinct by an overzealous detective during interrogations.

But even after all of this, most of the guys in the gallery are horrified by Saturday’s events.

But by saying “most,” I acknowledge that not all of the guys in the prison disapprove of the killing of the two cops. Outside of our gallery, some of the most unreasonable and misguided prisoners say that cops shoot black men with impunity, and so – out of frustration with a system that seems to disregard this injustice – these guys believe that killing two cops is justified.

It doesn’t seem to matter to them that the two cops weren’t known for any type of misconduct, or that one of them was against brutality and supported the demonstrators.

I’m not surprised by these dumb comments, though. To me they’re only the symptoms of a system that incarcerates the poor and uneducated. Does it really surprise anyone that the literacy rate in prisons is lower than in the general population? Or that this illiteracy makes men feeble-minded and easily swayed by a savvy charlatan like Louis Farrakhan?

This is no different than the way a working-class redneck in the South is brainwashed into voting against labor unions, his or her only protection against corporate exploitation. So we shouldn’t be surprised about the dumb things that come out of the mouths of all involved.

Yes, two murdered cops is a tragedy. But I hope this (very rare) event doesn’t become a red herring for what has been an endemic problem in the U.S. – the overuse of lethal force on black and brown people by law enforcement.