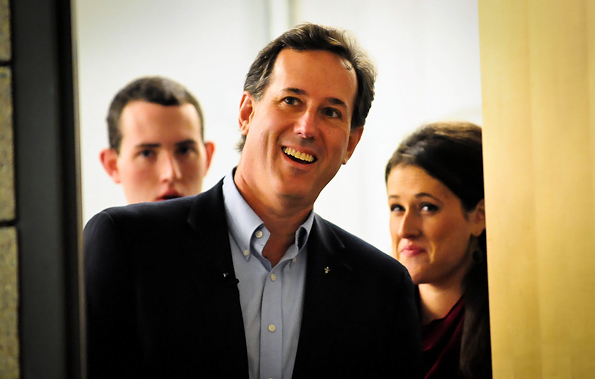 Despite his dominating performances in Florida and Nevada, the GOP frontrunner got flattened last night in Missouri, Minnesota and, most painfully, Colorado, by Rick Santorum.

Anyone who says they saw this coming is full of it.

In the absence of exit polls, I’ve got three big questions.

A result like last night’s doesn’t just happen. So what changed?

Romney’s major unforced error — “I’m not concerned about the very poor” — had time to show up in the results in Nevada. But Mitt won there handily.

The far bigger factor appears to have been the surprise resurgence of the culture war in American politics.

Second, the backlash over the defunding of Planned Parenthood forced the Susan G. Komen foundation to fire its Tea Partying chief of public policy, Karen Handel.

This trinity of setbacks helps explain Santorum’s electoral hat trick. They’re the kind of defeats that produce spasms of tribalism and victimhood among social conservatives. Every part of that reactionary dynamic favors Santorum — whose anti-contraception, anti-abortion, queer-bashing bonafides have never been in question — just as they hurt Romney, who once not only vowed to uphold Roe v. Wade, but outdo Teddy Kennedy by making “equality for gays and lesbians a mainstream concern.”

2) Where was Romney’s organization?

Anyone who watched the 2008 race between Barack Obama and Hillary Clinton knows that momentum and endorsements are no match for a good ground game in a caucus state. How could Romney, who is running on his managerial chops, simply fail to organize?

Take Minnesota, where Romney finished in third place behind Ron Paul. This result is all the more flabbergasting because Romney swept every delegate there in 2008. And this time around, he had former Governor Tim Pawlenty as a top surrogate.

The loss in Colorado is just… wow. Romney was backed by 6 out of 10 caucus goers in the state in 2008. He received barely one in three votes last night.

Romney has the money and the organization to compete everywhere; or so we’re told. Those resources should have guaranteed a caucus turnout to match his performances from four years ago. Instead, nearly half of Romney’s voters stayed home or defected.

Romney had a chance to step on the throats of his C-list opponents and finish this thing last night. But he bollixed a basic managerial task — and squandered his Big Mo (to say nothing of MO, where he got lapped in the primary vote by Santorum 57-26.)

Newt took the night off in Missouri, where he failed to qualify for the primary ballot (and where no actual delegates were actually awarded, besides).

So you might have expected him, too, to have focused on creating a respectable showing in the caucuses. Instead, Gingrich garnered a pitiful third place in Colorado and finished out of the money in Minnesota.

Newt’s entire electoral strategy right now is to keep things interesting until another Southern primary rolls around. After last night’s electoral no-show he may not last that long.