Romney Bombs, and Other Thoughts on the Charleston Debate - Rolling Stone
×
× 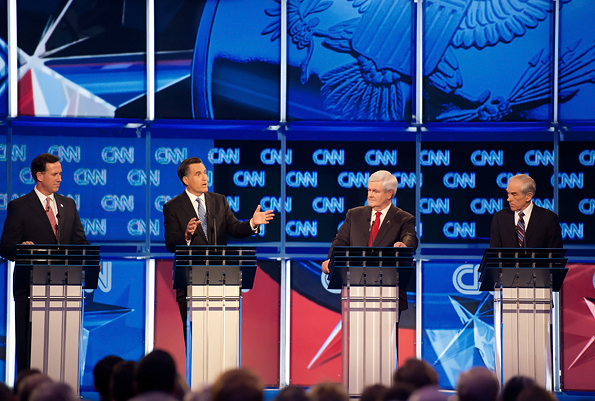 I have an article about South Carolina and the GOP race coming out in Rolling Stone soon, so I can’t say too much about that race here. But I do have a few quick notes about last night’s debate in Charleston, which I had the misfortune to attend.

• I was astonished to wake up this morning and read, in this morning’s Wall Street Journal, this assessment of Romney’s performance: “Mitt Romney turned in one of his strongest debate performances, defending his business record and laying into President Barack Obama as aggressively as he has in any previous debate.”

I don’t know Journal writers Patrick O’Connor or Neil King, so I can’t say for sure if they were there last night, but if they were, were they watching the same event as the rest of us? I thought Romney was a disaster and last night very nearly achieved the impossible: sharing a stage with Newt Gingrich and looking like the bigger asshole.

To me, the exchange where he fell overboard mid-answer and had to ask moderator John King what the question was (“But you asked me an entirely different question?”) came close to being an Ed Muskie moment.

The most interesting part of seeing these guys up close is seeing the way people like Rick Santorum and Gingrich respond to Romney in person: They appear to find him physically repulsive, their noses even scrunching up at him when they address him, like cops opening up a trunk with a body in it. And I think it’s real, I don’t think it’s an act. Romney is so totally insincere and calculating and soulless, it physically offends other politicians. It’s incredible to watch.

• I’ve given up trying to predict this race. Watching the events of last night, I saw plausible nomination scenarios for all four candidates. Don’t forget that if the merry-go-round of incompetence continues much longer – if Romney and Newt and Santorum keep hot-potatoing frontrunner status and primary victories – Ron Paul is going to waltz into the convention with a mass of delegates and a legit argument that he was the strongest and most consistent candidate.

• Standing next to the bloodless corporate cipher Mitt Romney and the pompous, bloviating egomaniac Newt Gingrich, Rick Santorum – creepy religious lunatic Rick Santorum! – came off like Clarence Darrow breaking up a Klan rally. “Rick Santorum, en fuego!” cracked one of the reporters in the media room, during Santorum’s tirade about Newt’s “grandiosity.”

• After the revolution comes and the Show Trial/Firing Squad period of our history begins, someone from CNN is going to have to answer some very tough questions about “Kevin,” the cheesy guy the network brought onstage before the debate to warm up the crowd and introduce John King. Casual viewers at home did not have to see this performance, so I won’t share anything about it here, but if anyone among the press or the audience from last night has an explanation for me about that whole business, please write to me and let me know, because I’m very confused.

Anyway, I have to get back on the road to a Mitt rally. More later …