Slowly, the truth is coming out. A new study by George Washington University’s Milken Institute School of Public Health has found that Hurricane Maria killed far more people in Puerto Rico than initially thought. The findings attribute an estimated 2,975 deaths to the storm from September 2017 through February 2018.

This is a long way from 64, which was the official government estimate in the months after the storm. And it more or less supports a recent study published in the New England Journal of Medicine, which suggested a range of deaths, from 800 to 8,000 (this study used a different, and less rigorous, methodology).

It also casts a new light on President Trump’s comments during his visit to Puerto Rico in the weeks after the storm, when he implied that the U.S. territory hadn’t suffered a “real catastrophe” like Katrina, which killed 1,833 people.  At the time of Trump’s visit, the death count in Puerto Rico was estimated at 16. Even then, everyone knew that number was inaccurate – Puerto Ricans were still digging out from the storm, and nobody had any idea of the real scale of destruction.

Super Bowl 2020: How to Watch or Stream the Game Online

“If you look at a real catastrophe like Katrina, and you look at the tremendous hundreds and hundreds and hundreds of people that died, and you look at what happened here with, really, a storm that was just totally overpowering — nobody has ever seen anything like this,” Trump said. “Sixteen versus literally thousands of people. You can be very proud. Everybody around this table and everybody watching can really be very proud of what’s taken place in Puerto Rico.”

Two weeks later, Trump was asked in the Oval Office how he would rate the administration’s response to the storm on a scale of 1 to 10.

To arrive at the estimate of 2,975 deaths, the study looked at historical death patterns from 2010 to 2017 to estimate how many people would have died had Hurricane Maria not hit the island. That number was then compared to the actual number of deaths from September 2017 through February 2018 — obtained in records provided by the Puerto Rico Vital Statistics Records division of the Puerto Rico Department of Health — to determine what the report describes as the “estimate of excess mortality due to the hurricane.”

Beyond the death count, the study also found that people of all ages and social stratums were killed in the storm. But risk of death was 45 percent higher for people living in what the researchers call “low socioeconomic development municipalities,” reaffirming a central truth of disasters: They hit poor people hardest.

This graph, which is included in the study and shows the difference in deaths between rich, middle-income and poor, is striking: 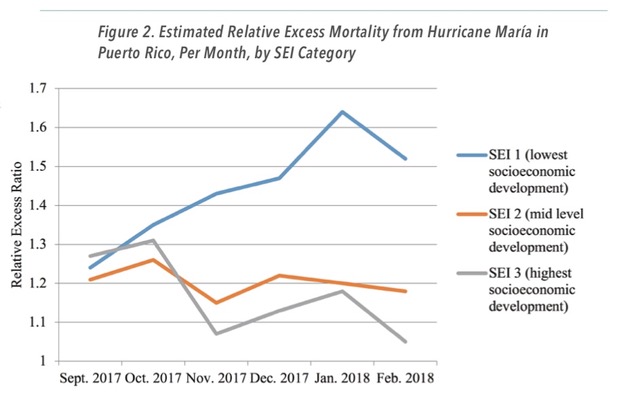 The report offers some explanation for why the initial count of 64 was so much lower than this new figure. It suggests that many doctors didn’t know the proper procedure to fill out death certificates, and the collapse of communication infrastructure on the island meant they couldn’t ask. It adds that some doctors were reluctant to relate death to hurricanes “due to concerns … about liability.”

The report also slams the Puerto Rican government for relying on emergency plans that were outdated and not designed for greater than Category 1 hurricanes. And there were no back-up plans for how to communicate after a disaster that wiped out cell towers and Internet service on virtually the entire island.

The study offers a number of recommendations about how to better record death in the event of the next disaster. But, more importantly, it is an opportunity for Puerto Ricans to remind the world of the enormity of what they have suffered — and are still suffering, as recovery from the hurricane continues all too slowly. As San Juan mayor Carmen Yulin Cruz tweeted shortly after the study was released today:

The # of deaths 2,975 reinforces the pain inflicted on the people of PR and the violation of our human rights. THEY WILL NOT BE FORGOTTEN.