As the sun sets on a remote peak along the West Virginia-Virginia border, a tense standoff unfolds between an armed squadron of U.S. Forest Service law enforcement officers and a band of campers. Generators are flicked on and prison-style floodlights blast the campers, as well as the protester they are guarding, a young woman in a tree who goes by “Nutty.”

On March 28th, “Nutty” planted herself atop a fifty-foot pole – the timber of a tulip poplar tree – in Virginia’s Jefferson National Forest to block the path of a proposed natural gas pipeline. She has now been living in a makeshift tent rigged to the pole for an astonishing 49 days, surviving on an assortment of initial supplies, catching her drinking water straight from the clouds and going to the bathroom in a bucket. To give her food or water, the U.S. Forest Service has determined, is illegal. At least three people have been arrested trying to do so, including one man that, according to Outsideonline.com was “handcuffed and put in leg shackles.” Last Saturday, when two Charlottesville physicians hiked the steep two-mile path to a support camp that had been established near Nutty’s “monopole” to perform a wellness check they were denied access. “It was shocking,” says pediatrician Paige Periello, one of the two physicians. “That just doesn’t seem like the way we want to treat people in Virginia, or anywhere in this country.”

Direct actions against oil and gas pipelines are rippling across Appalachia. Nutty has positioned herself at a particularly strategic location – it’s here that a pipeline backed by Con Ed and Pittsburg-based EQT, among other partners, and carrying fracked gas 300 miles from an especially gas-rich quadrant of the Marcellus Shale in northwestern West Virginia, will bore six-hundred feet beneath the Appalachian Trail.

Across the ridge, in Monroe County, West Virginia, a man named Deckard is living in a tree-sit that has been occupied since February 26th. About 80 miles east, in Franklin County, Virginia, a three-person tree-sit was established in April to block the Mountain Valley Pipeline. On Bent Mountain, outside of Roanoke, Theresa “Red” Terry and her daughter “Minor,” who own a 1,700-acre rural homestead that was partially snatched by pipeline companies using eminent domain, gained national attention for camping out in trees on their own land for 34 days before court-imposed-fines and the threat of forced removal brought them down. In central Pennsylvania, 62-year-old Ellen Gerhart faces six months in prison for her part in establishing a series of tree sits to block the Mariner East 2 and 2X pipelines from crossing part of her family farm. A resistance camp known as the Three Sisters Camp has sprung up on a plot of lush woods adjacent to the James River, in Central Virginia, to block the Atlantic Coast Pipeline. In North Carolina, where an arm of the Atlantic Coast Pipeline ends, farmer Tom Clark recently told a local paper that, if pipeline construction commences, he will climb a deer stand and stay for, “as far as I can go.”

Thanks to the Natural Gas Act of 1938, which states that, “the transportation of natural gas in interstate commerce” is “affected with a public interest,” gas companies are able to gain permission from the Federal Energy Regulatory Commission (FERC) to employ eminent domain, leaving little recourse beyond direct action for communities to hit back. “This fight has been life-changing,” says Rebecca Britton, founder of the Uwchlan Safety Coalition, who got activated because the Mariner East pipelines pass within 400 feet of her children’s bedrooms in suburban Philadelphia. “The big picture is the oil and gas lobby of Pennsylvania has a hold on the future of our state, and they are really just holding us back. I moved here because of the pristine beauty and the fresh water and the clean air, and I want to preserve that beauty for my community.”

The passage of Energy Transfer Partners’ Mariner East pipelines across Pennsylvania has already polluted numerous wetlands, waterways, and private wells. In the western Philly suburbs, where Britton lives, the lines pass within close sight of schools, shopping malls, senior centers and hundreds of backyards. In March, a series of sinkholes emerged along a section of West Whiteland Township, where drilling intended to take the pipelines beneath an Amtrak route and a residential neighborhood transformed a series of backyards into swamps of mud. Other yards, like that of Nancy and Jerry McMullin, which is peppered with birdhouses, feeders and a striking array of wild plants, will be trenched so the Mariner East 2 and 2X pipelines can pass. The land was initially granted eminent domain status in the 1930s to pipe petroleum across the state; now it’s being used to pipe natural gas liquids like ethane, butane and propane to a port on the Delaware River where much of it will be shipped overseas to manufacture plastics. “It takes the citizens to follow what rules are being broken and then point them out to our own regulatory agencies,” says nearby resident Tom Casey. 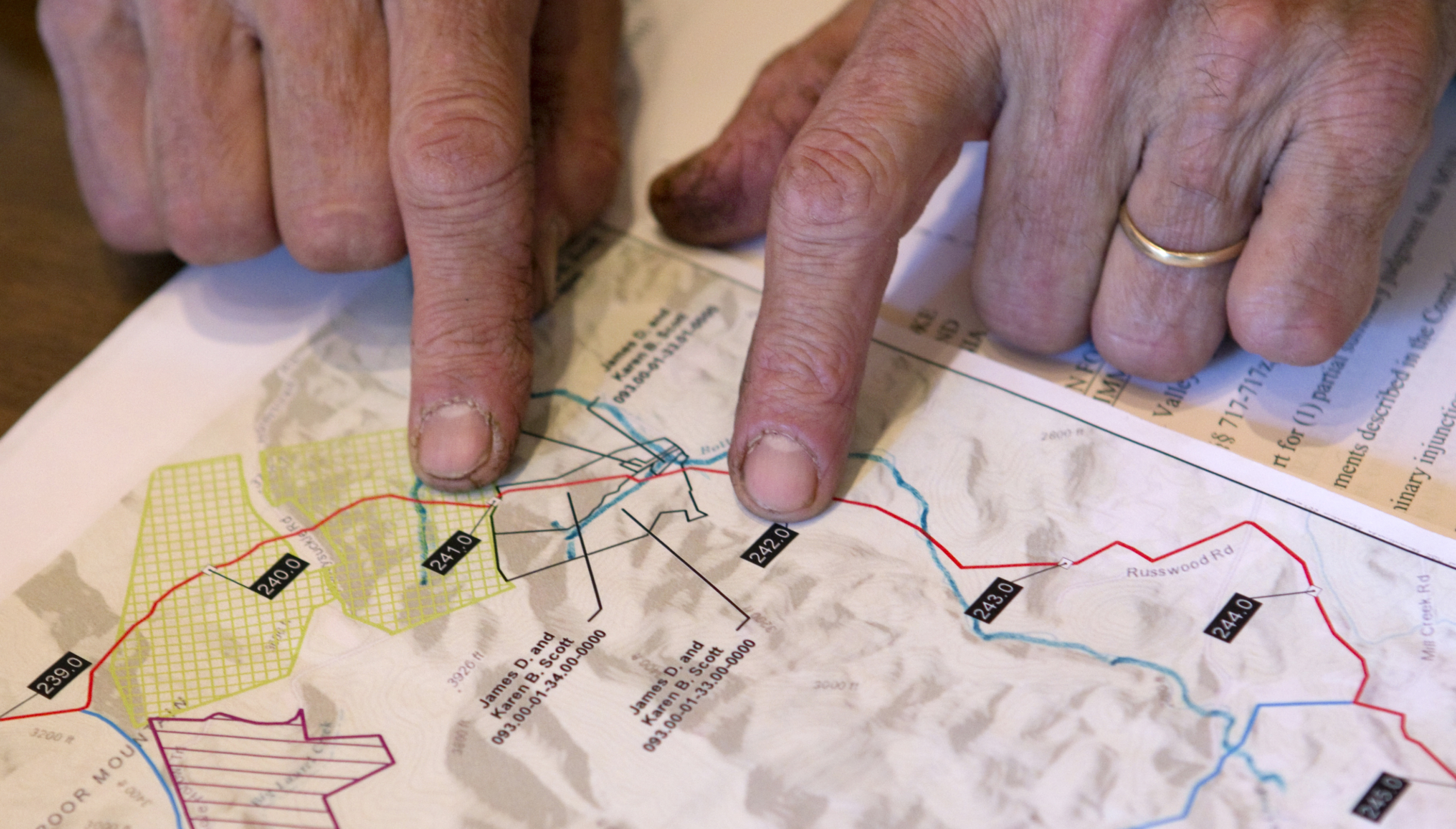 On Bent Mountain, the Mountain Valley Pipeline tears through a handsome landscape of apple orchards, family farms and dense woodlands dashed with gurgling creeks and lush wetlands. The pipeline will cross the headwaters of a beloved local waterway called Mountain Bottom Creek 80 times, says Bob Johnson, a former scientist at the Virginia Department of Environmental Quality. “You will see increased sediment loading, degradation, and a loss of habitat – no one really knows how that will impact the wetlands, or people’s wells.” All but one of 37 affected property owners in the area had their land seized by eminent domain. A bevy of Virginia legal cases are challenging the pipeline, including one being argued by Bent Mountain resident Tom Bondurant that questions FERC’s ability to issue certificates that enable corporations to employ eminent domain. “They’ve poisoned the water in West Virginia, they’ve poisoned the water in Pennsylvania, they’ve poisoned the whole fucking country,” said Red Terry earlier this week at a protest in Richmond. “It’s mindboggling that our politicians are getting away with this.”

“The whole thing is a lie,” says Reverend Paul Wilson, a pastor of two churches in Union Hill, a central Virginia community founded by freed slaves. In this location Dominion Energy, lead partner on the Atlantic Coast Pipeline, plans to build a massive compressor station – these facilities re-pressurize pipeline gas and have been documented to spray surrounding skies with a host of carcinogens, including benzene and formaldehyde. “They tell you it’s about clean natural gas but that’s not what fracking gas is. There is nothing clean about it. It’s liquid poison,” says Wilson. “Corporations do not have a soul, and because of that it is easy for them to dismiss us, people are dispensable, especially poor rural people.”

Back in the Jefferson National Forest, Nutty lingers through it all in her strange cocoon. “I have gallons of water stored,” she posted Tuesday on the Facebook page of Appalachians Against Pipelines (a cellphone and small solar collector enable her internet access). “I still have a stock of energy bars and some packets of applesauce. This is, comparatively, an extremely mild form of deprivation, and one I’m fortunate my body seems to have adapted well to.” But Bill Davis, Captain of Giles Lifesaving and Rescue Squad, who performs regular checks on Nutty by yelling up to her monopod from below, laid out a long and worrisome list of things that she could eventually suffer from: “Rhabdomyolysis, that’s pretty much where the human body starts eating itself, deep vein thrombosis, and just general wear and tear. There’s also a concern she could go into kidney failure. I worry about it every day.”

A collection of Nutty’s supporters is camped behind yellow police tape, 125-feet from the monopod, a boundary imposed, and fiercely monitored, by the Forest Service. Moods seesaw between the inherent bliss of camping on a stunning mountain beneath the sun and stars, and the palpable dread of living next to a security force. “The cops are armed and wear bullet proof vests and are constantly recording everyone who comes and everything that gets said,” says supporter Erin Mckelvy, of Montgomery County, Virginia. “Just yesterday, three of them from the day shift donned gloves and put bundles of plastic handcuffs on their belts and came aggressively over, unprovoked, to flex their power.” George Washington and Jefferson National Forests Supervisor Joby Timm explained in an email message, “Current law and federal policy emphasize the important role of national forests in energy generation and transmission.”

The support camp is known as Slanty Camp because the ground is so steep. On Monday, a woman from Monroe County, West Virginia hiked in to sing for Nutty. Earlier in the month Tasha Hiner, also from Monroe, visited with her two sons, Justis, 10, and Will, 14, bearing a dish of curried couscous, a pineapple, a rack of deer ribs (the deer was shot by Justis) and fresh ramps from the garden. “I remember as a little whippersnapper going to the courthouse and the old hillbillies were sitting there with their shotguns,” says Hiner. “A lot of the adults back then successfully fought many projects like this to keep our land and water clean, and I feel like now it is our turn to stand up.”