A Philadelphia mom whose child was ripped from her car by police amid a Black Lives Matter protest last year has filed suit against the National Fraternal Order of Police for casting her as an “unfit mother” and exploiting her child for Thin Blue Line propaganda.

The lawsuit, obtained by Rolling Stone and embedded below, seeks damages for invasion of privacy and intentional infliction of emotional distress. The case stems from a shocking incident of police violence last October, that itself followed the police killing of Walter Wallace Jr., a young Black man experiencing a mental health crisis whom cops shot after he allegedly lunged at them with a knife. That shooting set off mass protests, as well as incidents of vandalism and looting, late into the night of October 26th.

After midnight, Rickia Young received a phone call from a teenage family friend in West Philadelphia, whom she refers to as her nephew, asking for a ride out of the unrest in the neighborhood. Young, a home healthcare aid who was 28 at the time, put her young son in the car and soon picked up the teenager without incident. But as she drove her usual route home to North Philadelphia, Young found the street was blocked by police and protesters.

As Young was attempting to execute a U-turn to avoid the tumult, more than a dozen police officers suddenly swarmed around the vehicle. Without provocation, they began smashing the windows of the SUV with baton blows, before yanking both Young and the teenager from the car. (Watch video of the incident here.) Cops proceeded to beat Young in the street until she was bloody, and then detained her. Police separated Young from her child, who was taken into police custody, for hours. Young was later released without charge — because she had done nothing wrong.

'Hocus Pocus' Put A Spell On The Drag Community

This week, the city of Philadelphia agreed to pay out a $2 million settlement to Young, compensation for having been, in the remarkable words of Philadelphia Police Chief Danielle Outlaw, “terrorized” by cops who “violated the mission of the Philadelphia Police Department.” The city’s mayor, Jim Kenney, denounced the police violence against Young as “absolutely appalling.” Two officers involved in the incident have reportedly been fired, and many others are facing disciplinary proceedings.

Now, Young is suing the National Fraternal Order of Police — which bills itself as “the number one voice of America’s law enforcement” — in Philadelphia County Court, for its conduct on social media in the aftermath of that incident. 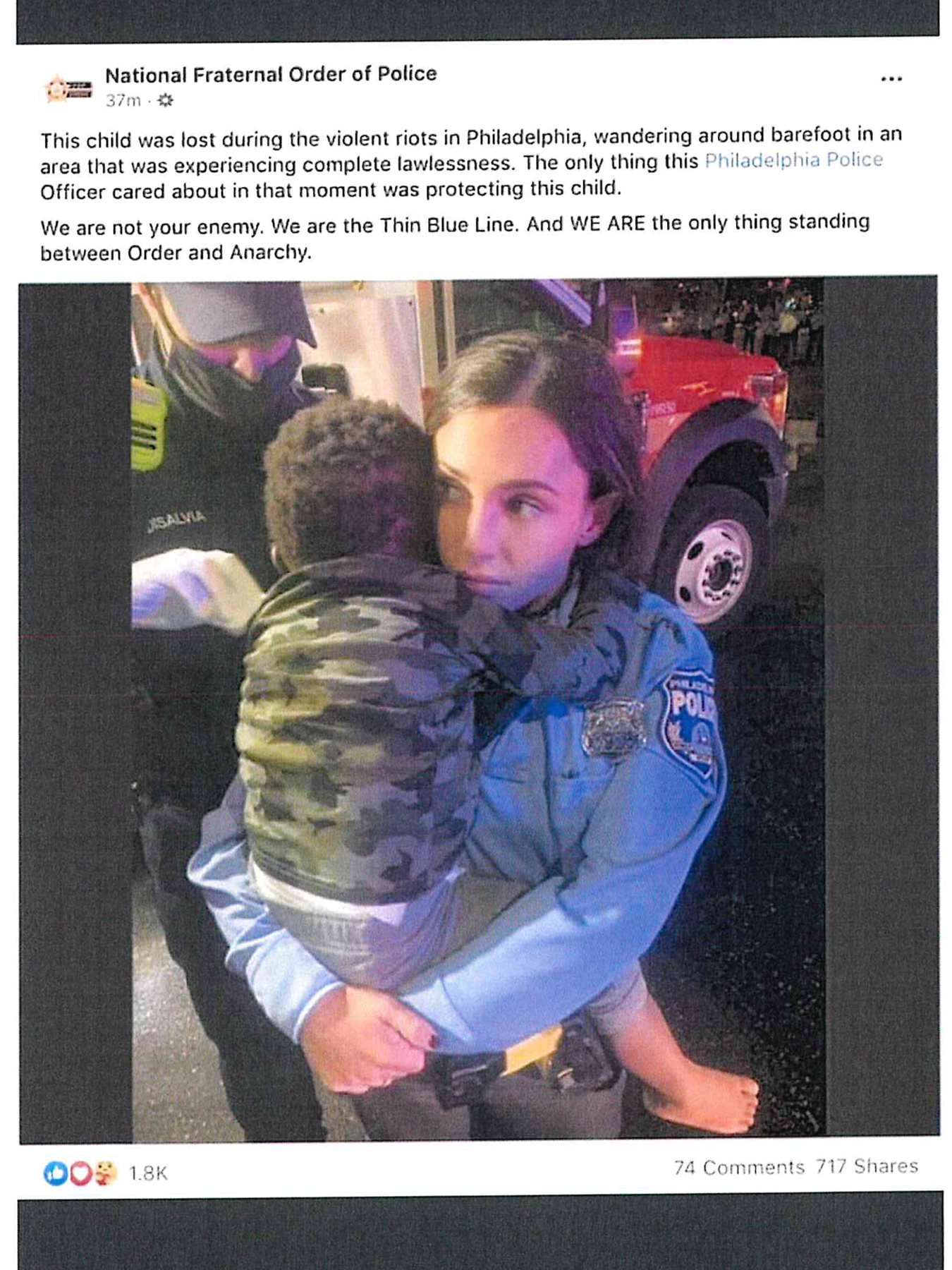 The NFOP is not strictly a union, as its 350,000 members includes non-union officers. But it wields clout not unlike the NRA: It lobbies Congress on behalf of cops, and gave Donald Trump its “proud” and “enthusiastic” endorsement in 2020, praising his commitment to “law and order.”

When Young’s child was photographed in the arms of a female police officer, NFOP attempted to turn the image into a PR win for police. As presented in an exhibit appended to the suit, NFOP posted the image to Facebook with the following caption, the particulars of which are fiction:

This child was lost during the violent riots in Philadelphia, wandering around barefoot in an area that was experiencing complete lawlessness. The only thing this Philadelphia Police Officer cared about in that moment was protecting this child. We are not your enemy. We are the Thin Blue Line. And WE ARE the only thing standing between Order and Anarchy.

The suit alleges NFOP “intentionally and with malice portrayed Ms. Young’s son as a neglected and abandoned child in order to promote its own political propaganda.” It further contends that NFOP portrayed Young in a “false light” by implying that she was “an unfit mother” who was “unaware of the location of her child,” when in reality “the child was taken from Ms. Young’s vehicle while she was being beaten by the police after they smashed all the windows of her vehicle and violently yanked her from her car.” NFOP did not respond to a request seeking the group’s perspective on the substance of the lawsuit.

In a press conference with her attorneys on Tuesday, Young said she hoped to hold NFOP “accountable for what they did to us.” She added: “For them to portray me as this type of mom who wouldn’t know or care where her child was while chaos was happening all around was very hurtful.” Young also blasted NFOP for what she called its efforts “to promote a political message of fear of black people and civil protesters.”

Kevin Mincey, one of Young’s lawyers, called out NFOP for pushing the claim that police offer society protection from anarchy, calling it “disgusting when you consider that it was the NFOP’s rank-and-file members who caused the chaos that night, and essentially kidnapped Ms. Young’s son, and created the conditions that they characterize as a riot.”

Mincey vowed that the suit would ensure that NFOP’s “abhorrent behavior” will not be swept under the rug, adding: “We are eager and prepared to prove our case to a Philadelphia jury.”

View this document on Scribd