Occupy Protesters Get Their Squid On in San Francisco - Rolling Stone
×
× 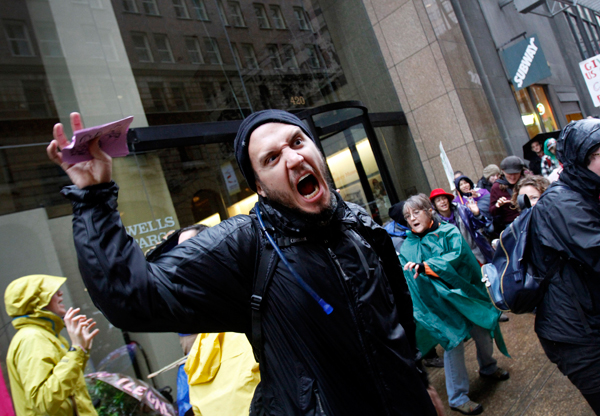 Hundreds of protesters surrounded and effectively shut down Wells Fargo Bank in San Francisco's financial district this morning, one of many peaceful-yet-disruptive actions planned for today by Occupy Wall Street West. Activists, some dressed in squid costumes, kicked off the day with a 6 a.m. "squid fry" outside Goldman, Sachs. (The squid theme is a nod to Matt Taibbi's immortal description of the investment bank as – everybody now! – "a great vampire squid wrapped around the face of humanity, relentlessly jamming its blood funnel into anything that smells like money.") A statement from Occupy Wall Street West said Friday's actions – which you can follow in real time here – "will continue to build a strategic mass movement asserting the power of the 99 percent for economic justice and a better world."