NRA Says It's in Financial Trouble, May Be Unable to Exist - Rolling Stone
×
×

The National Rifle Association warns that it is in grave financial jeopardy, according to a recent court filing obtained by Rolling Stone, and that it could soon “be unable to exist… or pursue its advocacy mission.” (Read the NRA’s legal complaint at the bottom of this story.)

The reason, according to the NRA filing, is not its deep entanglement with alleged Russian agents like Maria Butina. Instead, the gun group has been suing New York Gov. Andrew Cuomo and the state’s financial regulators since May, claiming the NRA has been subject to a state-led “blacklisting campaign” that has inflicted “tens of millions of dollars in damages.”

In the new document — an amended complaint filed in U.S. District Court in late July — the NRA says it cannot access financial services essential to its operations and is facing “irrecoverable loss and irreparable harm.”

Specifically, the NRA warns that it has lost insurance coverage — endangering day-to-day operations. “Insurance coverage is necessary for the NRA to continue its existence,” the complaint reads. Without general liability coverage, it adds, the “NRA cannot maintain its physical premises, convene off-site meetings and events, operate educational programs … or hold rallies, conventions and assemblies.”

The complaint says the NRA’s video streaming service and magazines may soon shut down.

“The NRA’s inability to obtain insurance in connection with media liability raises risks that are especially acute; if insurers remain afraid to transact with the NRA, there is a substantial risk that NRATV will be forced to cease operating.” The group also warns it “could be forced to cease circulation of various print publications and magazines.”

In addition to its insurance troubles, the NRA court filing also claims that “abuses” by Cuomo and the New York State Department of Financial Services “will imminently deprive the NRA of basic bank-depository services … and other financial services essential to the NRA’s corporate existence.” 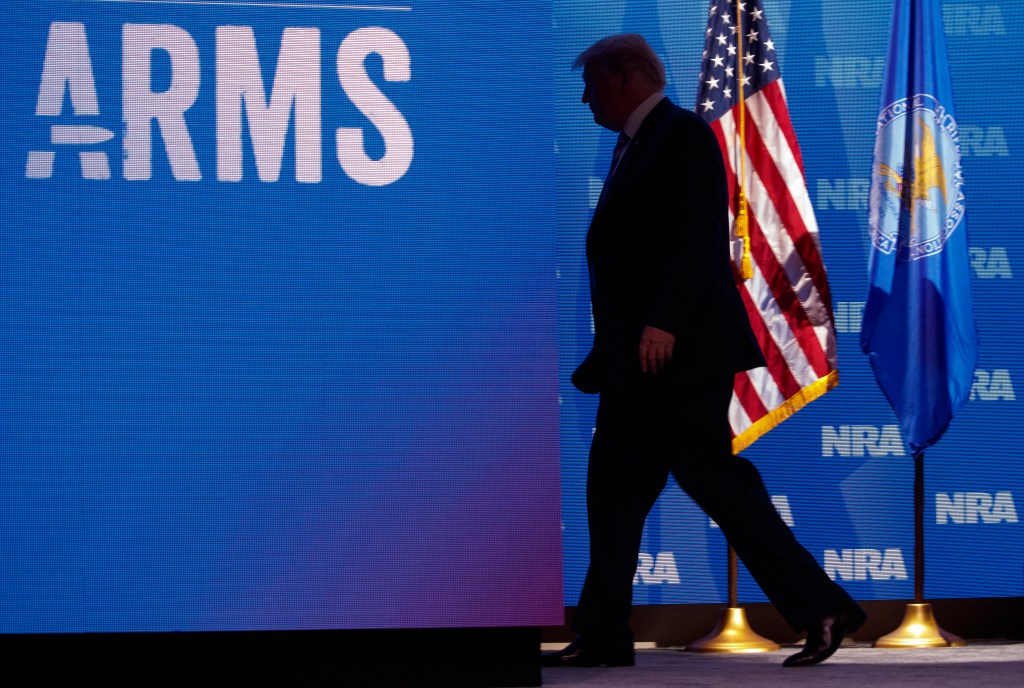 President Trump leaves the stage after addressing the National Rifle Association convention in Dallas, May 4th, 2018.

The lawsuit presents these financial risks as catastrophic. Without access to routine banking services, the NRA claims, “it will be unable to exist as a not-for-profit or pursue its advocacy mission.” The lawsuit accuses New York’s government of seeking to “silence one of America’s oldest constitutional rights advocates,” pleading to the court: “If their abuses are not enjoined, they will soon, substantially, succeed.”

The lawsuit stems from actions taken by New York financial regulators to halt the sale of an illegal, NRA-branded insurance policy. The NRA actively marketed “Carry Guard,” a policy to reimburse members for legal costs incurred after firing a legal gun. In May, the state of New York found that Carry Guard “unlawfully provided liability insurance to gun owners for certain acts of intentional wrongdoing.” The NRA’s insurance partners agreed to stop selling the policies and pay a $7 million fine.

The NRA complaint alleges that New York was not content to block this single insurance product, but instead campaigned to sever the NRA’s ties to a wide range of financial service providers, from insurance companies to banks.

The NRA did not respond to a request for more detail about its financial distress, but its most recent financial disclosure also shows it overspent by nearly $46 million in 2016.

The lawsuit decries pressure from state regulators in the wake of the Parkland, Florida massacre — including a letter asking financial institutions to heed “the voices of the passionate, courageous, and articulate young people who have experienced this recent horror first hand” — and from the governor himself. In April, Cuomo tweeted: “I urge companies in New York State to revisit any ties they have to the NRA and consider their reputations, and responsibility to the public.”

In its complaint, the NRA paints these actions as a “malicious conspiracy to stifle the NRA’s speech and induce a boycott of the NRA.” Cuomo and state regulators, the NRA alleges, were intent on “suppressing the NRA’s pro-Second Amendment viewpoint” and had engaged in “unlawful conduct with the intent to obstruct, chill, deter, and retaliate against the NRA’s core political speech.”

In the filing, the NRA reveals that its longtime insurer broke off negotiations this winter and “stated that it was unwilling to renew coverage at any price.” [Emphasis in original.] The NRA claims it “has encountered serious difficulties obtaining corporate insurance coverage to replace coverage withdrawn.” In addition, the NRA contends that “multiple banks” have now balked at doing business with it “based on concerns that any involvement with the NRA — even providing the organization with basic depository services — would expose them to regulatory reprisals.”

The lawsuit seeks an immediate injunction to block state authorities from “interfering with, terminating, or diminishing any of the NRA’s contracts and/or business relationships with any organizations.” Without court intervention, the complaint reads, “the NRA will suffer irrecoverable loss and irreparable harm if it is unable to acquire insurance or other banking services due to Defendants’ actions.”

Cuomo also did not respond to a request for comment, but has previously waved off the NRA’s lawsuit as “a futile and desperate attempt to advance its dangerous agenda to sell more guns.”