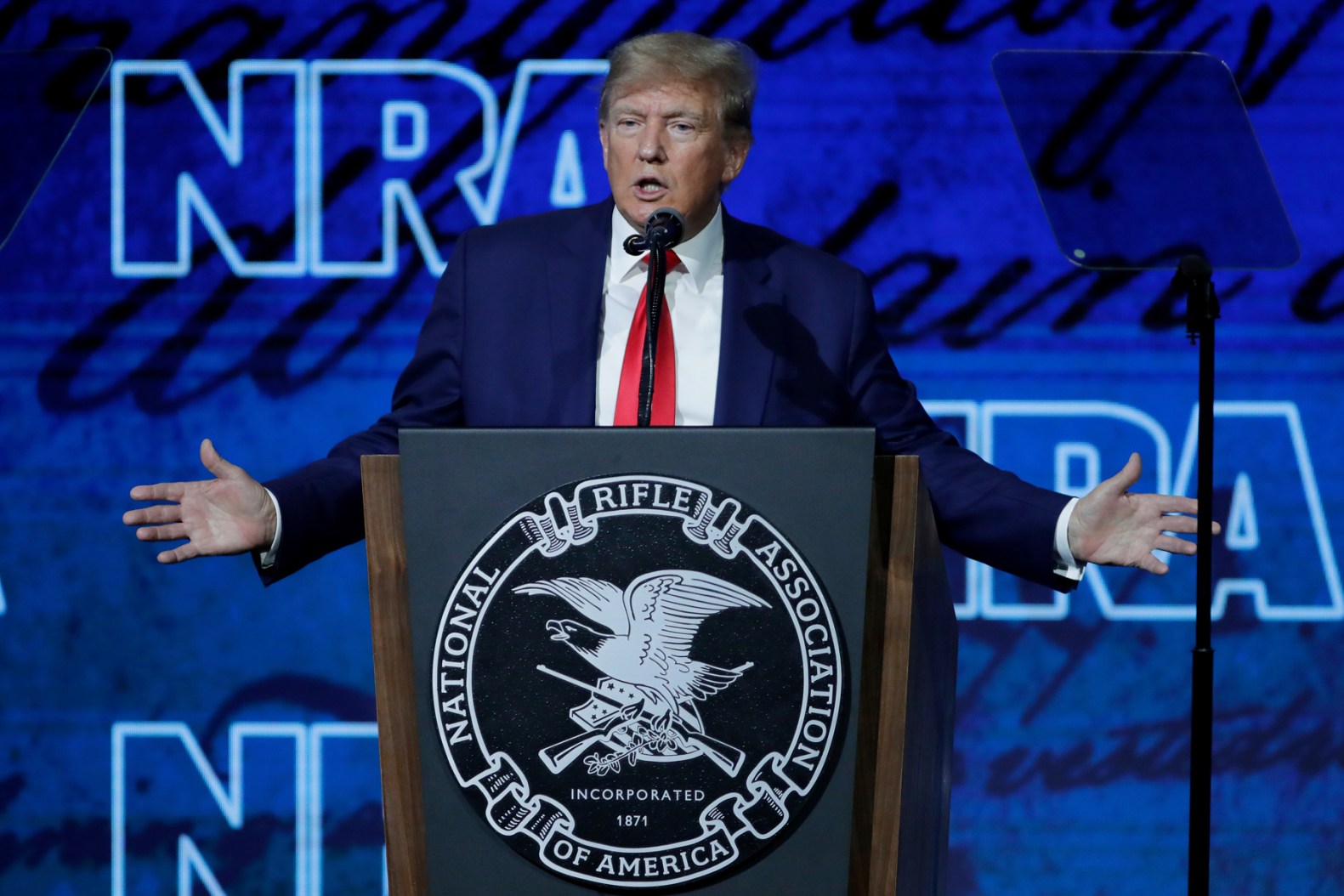 HOUSTON—The biggest names of the National Rifle Association’s annual gun show wouldn’t take the stage until mid-afternoon on Friday. But a young man with a vintage Make America Great hat, and a couple wearing matching “ULTRA MAGA” shirts, began camping out in the third-floor hallway of the convention center not long after 9 a.m. to guarantee themselves of prime seats for the star attraction: former president Donald Trump.

The timing of this conference, the NRA’s guns-palooza, is beyond perverse, coming just days after 19 students and 2 teachers were massacred by an 18-year-old wielding an AR-15 in Uvalde. By noon on Friday, a protest was in full-tilt across the street from the convention hall. Demonstrators for gun control held signs aloft with slogans like “NRA OWNS GOP.”  One listed the names of the children killed in their classroom on Tuesday, etched in black and blood red. “¡Asesinos!” yelled a man repeatedly into a megaphone, using the Spanish word for “killers.”

Given the combustibility of the moment, the United States Secret Service didn’t mess around. By 1 p.m., a mostly retirement-age crowd had queued up behind the early-comers, in line that snaked into a cavernous side-annex of the convention hall. A German shepherd with a “K9 Explosive” collar walked the line, sniffing at guests. Large poster boards warned attendees that firearms, ammunition, knives and “weapons of any kind” were prohibited inside the convention arena.

Filtering this crowd of approximately 3,000 NRA members through the Secret Service security checkpoint — replete with airport style metal detectors, wandings and pat-downs — took close to two hours. But there was little grumbling about the small inconvenience to ensure the safety of the former president, as well as Texas Sen. Ted Cruz, Gov. Kristi Noem of South Dakota, and, of course, NRA chief executive Wayne LaPierre.

The irony that a common-sense gun restriction was creating a firearms-free bubble inside the belly of the NRA convention was glaring, but attendees and speakers alike seemed blinded to it completely. Speaker after oblivious speaker insisted that curbs on gun can’t and won’t deter shooters, and that the only solution to the nation’s plague of gun violence is more yet more weaponry.

The General Assembly arena was set up like a concert, with NRA VIPs crowding the stage in the pit. An array of television cameras stood on a riser behind them, facing the stage — itself empty but for a podium emblazoned with the NRA seal flanked by presidential-style teleprompters. A pair of Jumbotrons on the wall turned each speaker into a talking head.

To hear the convention’s political speakers tell it, a gun didn’t kill the students and teachers of Uvalde.

“If we as a nation were capable of legislating evil out of heart and minds,” said La Pierre, “we would have done it a long time ago.”

The NRA honcho appeared to have undergone a personality transplant since his bombastic performance in the wake of the Newtown shooting in 2012, when he infamously thundered that, “the only thing that stops a bad guy with a gun is a good guy with a gun.” On Friday night, LaPierre’s tone was more somber, grandfatherly, but in the end no less radical. Dressed in a corporate blue suit, LaPierre repeated his call for armed guards in school, called gun ownership a “human right,” and insisted that only firearms can prevent the “hate-filled, vile monsters who walk among us from committing their evil.”

Appearing via video — instead of in person as scheduled — Texas Gov. Greg Abbott sang from the same hymnal: “America is grieving with an evil madman who took the innocent lives of school children” Abbott said. But he warned against new gun restrictions because criminals don’t obey laws, and the existing slate of gun restrictions “have not stopped madmen from carrying out evil acts on innocent people.”

In case the message wasn’t getting through, the unctuous Ted Cruz laid it on thick. “None of us will truly understand the manifest evil that devastated Uvalde,” Cruz said. He insisted that guns, and even gun laws were not the issue, rather “cultural sickness giving birth to unspeakable acts of evil.” While Cruz did make an impassioned call for door control, calling for school buildings with a single-point of entry, and federal funding for “bulletproof doors:” Cruz’s speech was peppered with calls from the audience of “arm teachers” and “more guns.” The Texas senator was soon was engaging in a call-and-response. “Ultimately we all know that what stops armed bad guys is armed…” Cruz began.

Confessions of a Sometimes-MAGA Critic

“Good guys!” the crowd cheered back.

While LaPierre had sought to strike a respectful tone. Subsequent speakers sounded less and less somber. Noem of South Dakota, appearing in a wine-red leather jacket, used her turn at the podium to make a passing recognition of the week’s tragedy before launching into what sounded every bit like a political stump speech, highlighting her record loosening gun laws in South Dakota. Noem also touted her (wildly deadly) hands-off response to the Covid epidemic. “Now is not the time to cave to the woke culture,” Noem insisted, telling NRA members to never back down in the face of criticism. “Now is when we double down.”

By the time the emotionally crippled former president took the stage, the staged attempts at grief were descending into farce.

Trump saluted the “wonderful patriots of the NRA,” telling the gathered crowd, “You are the backbone our movement.”

The former president took a dig at the many politicians who backed out of the convention at the last minute: “Unlike some, I didn’t disappoint you by not showing up.” Trump then veered into an atrocious attempt to memorialize the dead, reading (and frequently mangling) the names of the young victims, while the synthesized sound of a bell tolled after each name.

To underscore the good-guy-with-a-gun theme, Trump called to the stage a man in a cowboy hat, whom he celebrated for having shot and killed a gunman who pulled a weapon in church. A silver-haired gentleman named Jack came to the microphone and did his part to drive home the message, insisting to the crowd of the experience: “I did not kill a human being that day — I took out evil.”

Jack also delighted the gathering — which seemed determined to make this Trump rally into a party, never mind Uvalde — by telling the sore loser of the 2020 election, “You’re still my president.”

The remainder of Trump’s meandering hour-long speech, it is necessary to report, sounded like a dry run for a new campaign. It included attacks on Joe Biden for the withdrawal from Afghanistan and high gas prices, and a threat to crack down on liberal cities like Portland should he return to the Oval Office.

In one of the strongest hints that another bid for office could be in his future Trump called on NRA members to help “tough-on-crime, pro-second amendment candidates” retake the House and the senate in 2022. “And in 2024,” Trump said, “we’re going to take that great and beautiful White House.”

The crowd burst out into a chant of “Four more years!”