WASHINGTON — The Unite the Right 2.0 white-nationalist demonstration had ended early on Sunday, and a clump of bored, black-clad counter-protesters started marching north, looking for some action.

After a block or two, a counter-protester in a black spiked helmet spotted a man dressed in red, white and blue. They screamed at each other, and just when the confrontation looked like it might escalate into violence, the man in the patriotic apparel spun around and pointed to the back of his vest: ANTIFA. They had a laugh and went their separate ways.

That just about summed up what it was like to attend Unite the Right 2.0.

One year ago, hundreds of mostly white men marched on Charlottesville, Virginia, for the first Unite the Right, a demonstration ostensibly meant to protest the removal of Confederate statues that soon turned deadly. The events of that weekend are seared into our collective memory. Hordes of white men carried tiki torches and chanted “You will not replace us,” at times subbing in “Jews” for “you.” The protesters violently clashed with police and counter-protesters. One of those white nationalists, James Alex Fields Jr., drove his car into a crowd of people, killing 32-year-old Heather Heyer and injuring dozens more. (Fields was charged with first-degree murder, among other counts. His trial is slated for later this year.) What followed was President Trump’s gutless response when he said that some of the white nationalists were “very fine people” and that “both sides” held blame for the bloodshed.

This weekend’s sequel was every bit as anticlimactic and pathetic as Charlottesville was shocking and disturbing. Only a few dozen people showed up for Sunday’s event, and they were a soggy, sorry-looking bunch. (It rained off and on all afternoon.) Some carried American flags, others wore combat helmets and eye goggles for protection. 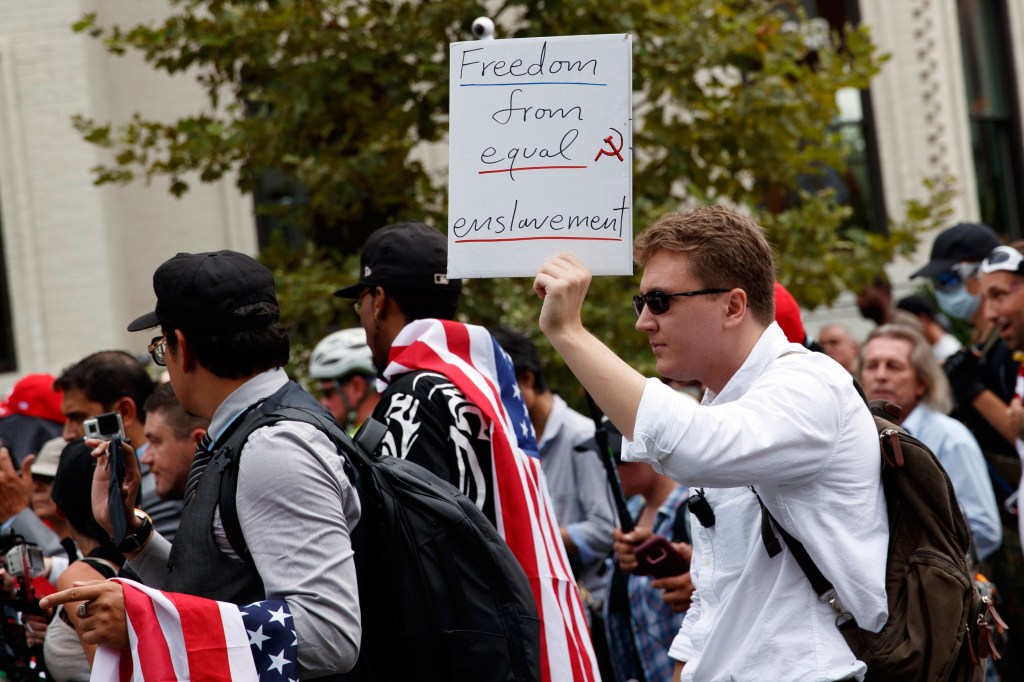 An attendee of the Unite the Right 2.0 rally walks in police protection to Lafayette Square across from the White House. Photo credit: Ting Shen

Not that they needed it.

The D.C. police, U.S. Park Police and Secret Service had transformed Lafayette Park just north of the White House into a fenced-off compound in the name of free speech and expression. The few white nationalists who did turn up were afforded security befitting a visiting head of state. They had their own subway car en route to Lafayette Park, police escorts in and out of the park and they were walled off from the counter-protesters by barricades and lines of police officers for the short duration of the event itself — which, it’s worth noting, finished up around 5 p.m., two-and-a-half hours ahead of schedule.

Across the park from the official event were several thousand counter-protesters, a raucous and lively mix of young and old demonstrators. There were religious leaders and Code Pink members, Black Lives Matter activists and all-black Antifa types. They stood in the rain and chanted “Go home, Nazis!” and “Racists don’t have right to free speech!” in the direction of the comparatively miniscule Unite the Right crowd. Indeed, the actual white nationalist event was so hard to see from the north side of Lafayette Park where the counter-protest took place that it was possible to stand there in the rain and think that the counter-protesters were chanting at the White House itself.

After Sunday’s flop, it’s tempting to ask: What’s next for the alt-right? Is it on the wane, headed toward defeat? Not quite yet.

The Atlantic‘s Adam Serwer put it well in a story leading up to this weekend:

[The] alt-right and its fellow travelers were never going to be able to assemble a mass movement. Despite the controversy over the rally and its bloody aftermath, the white nationalists’ ideological goals remain a core part of the Trump agenda. As long as that agenda finds a home in one of the two major American political parties, a significant portion of the country will fervently support it. And as an ideological vanguard, the alt-right fulfilled its own purpose in pulling the Republican Party in its direction.

Jason Kessler, the organizer of both Unite the Right events, may have failed to stage anything remotely resembling a follow-up to last year’s rally. But the cause Kessler and his followers champion, the beliefs they hold about race and white supremacy and immigration — those views have today found a home in one of America’s two major political parties. They have a receptive audience in the White House and with President Trump, who has spent his first year-and-a-half in office spewing bigotry toward immigrants and people of color, and who just today attacked the intelligence of a former black female employee and surrogate, Omarosa Manigault-Newman.

And so it was strange on Sunday to watch thousands of counter-protesters directing all of their energy and ire at a pathetic gathering of a few white nationalists. It seemed far more fitting to imagine those thousands of demonstrators aiming their outrage instead at the White House in the near distance and the man who currently occupies it.