Murder in the Rainforest: Indigenous Tribes on the Climate Frontlines - Rolling Stone
×
×

On the morning of December 5th, a dark piece of news began circulating at the U.N. climate talks in Lima: The body of José Isidro Tendetza Antún, a leading Ecuadorian indigenous-rights and anti-mining campaigner, had been found in a riverside grave near his village, his remains bound in rope, showing signs of beating and torture. Antún had planned to be in the Peruvian capital last week, where hundreds of indigenous leaders from around the world gathered to demand recognition and rights, as both defenders of the world’s rainforests and underappreciated players in the effort to slow climate change.

The outlines of Antún’s murder were grimly familiar to indigenous activists. The spread of logging, agriculture and extractive industry into once remote forests has sparked social conflict under the tropical canopies of Amazonia, Africa and Asia. Rising native resistance is met with repression and violence, the screams from which don’t often reach the outside world. The situation is especially bad in the northwest Amazon. News of José Antún’s death in Ecuador follows the September killing of four Peruvian indigenous anti-logging activists near the Brazil border. The group’s slain leader, Edwin Chota, had also planned to travel to Lima and use his famed energy and eloquence to help sound the indigenous alarm. Two of the widows faced down threats from local loggers to attend in his name.

This jungle violence isn’t just a human tragedy or a local environmental story — it is global climate politics. The first days of the Lima summit — known as COP 20, for the twentieth session of the Conference of Parties to the U.N. Framework Convention on Climate Change — saw the publication of data that quantifies, for the first time, the exact size of the climate impact made by indigenous populations as front-line guardians of imperiled rainforests. The size of this impact, a kind of negative carbon footprint, is staggering. Nowhere is this more true than in the Amazon that begins just over the mountains from the just-concluded negotiations.

“The territories of Amazonian indigenous peoples store almost a third of the region’s aboveground carbon,” said Woods Hole Research Center scientist Wayne Walker. “That is more forest carbon than is contained in some of the most carbon-rich tropical countries, including Indonesia and the Democratic Republic of the Congo.”

Walker is an author on a new peer-reviewed study, “Forest Carbon in Amazonia,” slated for publication in the journal Carbon Management. The report, released at the start of COP 20, details how preserving carbon-rich forests and protecting indigenous rights are two sides of the same climate coin. Designated indigenous territories in the Amazon contain 28,000 megatons of stored forest carbon, according to the study, which statistically unpacks the close correlation between titled indigenous land and the integrity of carbon-storing tropical rainforests. When granted legal protection of their land, indigenous populations continue to husband their ancestral environment as they have for centuries. “International recognition and investment in indigenous and protected areas are essential to ensuring their continued contribution to global climate stability,” said Richard Chase Smith, of Peru’s Instituto Bien Comun, a co-author of the study.

That’s the good news — that the rainforest has natural protectors already living there. The bad news is the world’s governments, including some of the biggest rainforest nations, have failed to grant title to indigenous territories or protect them from loggers and state-backed oil and mining projects. “We have never been under so much pressure,” said Edwin Vásquez, a study co-author and president of COICA, the Indigenous Coordinating Body of the Amazon Basin. The Woods Hole study estimates that 40 percent of the forests holding carbon on indigenous are now under direct threat by the spread of industry. Failure to protect this land, the authors argue, raises the odds of “dieback,” a dreaded feedback loop scenario in which climate change causes wilting forests to begin releasing their own carbon. “Releasing the carbon currently at risk in Amazon [indigenous territories] alone — equivalent to clearing all of Peru’s forests — would increase the probability of Amazon dieback, with deleterious and potentially irreversible effects on the atmosphere and the planet,” notes the Woods Hole report.

Prior to the study, the correlation between indigenous land-rights and healthy tropical forests was intuitive. Now that it’s backed by official literature, indigenous groups hope the world will begin treating them as important allies whose struggle has global significance. 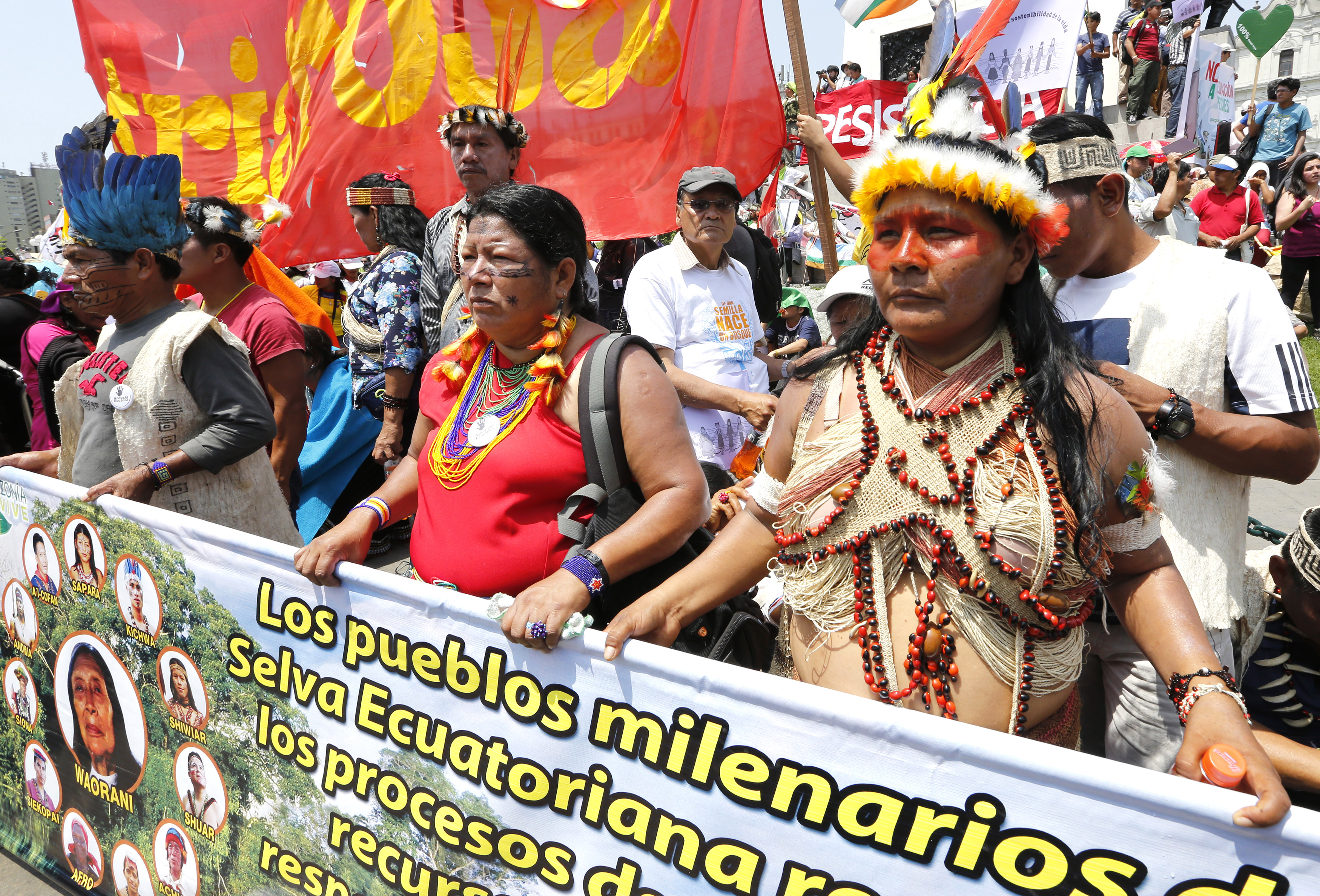 “We have always known that indigenous peoples manage forest resources sustainably, and therefore are major actors in the protection of the Amazon landscape, but now we have scientific evidence that their territories act as barriers to deforestation,” said Ana Saenz, a researcher with Peru’s Instituto Bien Comun (Common Good Institute). Saenz is co-author of another new study showing that indigenous populations protect their forests even when they live in proximity to roads and other access routes to markets. But these cultures can only take so many cuts before they begin to bleed out and absorb the values of the encroaching culture, with its tractors and chainsaws.

Prior lack of hard data never stopped indigenous groups from attending international climate fora and pressing their complaints. Indigenous representatives addressed some of the first COP gatherings, and were soon sitting in as official observers. They’ve organized official events like this year’s Indigenous Pavilion and lobbied successfully for inclusion in treaty language. There are indigenous veterans of the climate circuit with more experience than the youngest negotiators representing major economies.

One of these veterans is Mina Susana Setra, deputy of the Peoples’ Alliance of the Archipelago, an umbrella group representing 15 million indigenous Indonesians. Setra says the crises facing the world’s indigenous communities are accelerating and converging, along with their response. “In every country, indigenous people face the same problems and share the same basic vision,” she said. “The vision is self-governance in our own territory, without violence or intervention, so that we can maintain our relationship with nature. Without the land, without the water, there’s nothing. That’s why we fight and die to protect it.”

This is not just rhetoric. A growing body count is evidence that indigenous activists must accept death as a possible price for their activism, set as it is in remote regions where state and private security forces often have free rein.

For throwing a floodlight on these two colliding trends — threats to the rainforests and violence against those trying to defend them — there is no better stage than the Peruvian government complex that housed the UN talks. Among the nine Amazonian countries, Peru contains the second-most rainforest, after Brazil. It also leads the world in parceling out its forests and land to the highest bidder: 40 percent of Peru’s total area, including most of its rainforest, is controlled by private industry, largely oil and mining. As any Peruvian activist will tell you, the country’s rulers have no patience for organized opposition to this Great Amazonian Sell-Off. The country ranks fourth in the repression of environmental activists (at least 57 have been murdered in the last 12 years) and shows an active contempt for the human rights and land claims of its 14 million indigenous citizens.

Along with land titles and the freedom to be left alone, many indigenous activists want something more from the consumer society that feeds on its trees and minerals. They want to transform it according to indigenous values, to help it understand why it’s better to live in a world without corporations that dump cyanide-laced mining waste into rivers where people drink and swim.

During an impassioned speech delivered to the Indigenous Caucus in Lima, a Congolese indigenous leader challenged his brothers and sisters to be more assertive in their interactions with UN diplomats.

“We must be more than just witnesses here, we must demand to be used for what we know,” he said. “The people in those conference rooms don’t know as much as they think they do. If they did, they wouldn’t be in this situation.”