Mock the Vote: How Pat Paulsen Paved the Way for Colbert - Rolling Stone
×
× 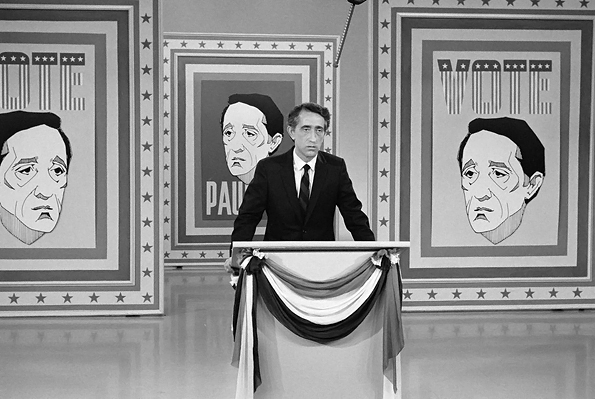 Anyone who’s followed the history of presidential campaigns since the Sixties will find something weirdly familiar about the past year’s GOP race. At various times, the cast has included a Romney, an African-American who never stood a chance (Herman Cain), a blusterer who presents himself as the great very-white hope (Newt Gingrich), and a comedian who mocks the entire circus (Stephen Colbert).

Hurtling back 44 years, you’ll find a strangely similar gang. The 1968 race included a Romney (George, Mitt’s Michigan-governor dad), an African-American who truly didn’t stand a chance (Eldridge Cleaver, then a member of the Black Panthers), and a blusterer who literally stood in the way of desegregation (Alabama governor George Wallace). And last and far from least was a comedian who, on TV and on the quasi-campaign trail, showed us all how absurd the process was becoming.

These days, Pat Paulsen is remembered mostly by those who can remember 1968, but his proto-Colbert faux-candidacy looks amazingly familiar in retrospect. With his thin, triangular face and look of a worn-down town clerk (or, perhaps, a depressed gravedigger), Paulsen first came to national prominence on the Smothers Brothers’ counterculture-geared variety show, which ran from 1967 to 1969. Amidst the anti-war jokes and appearances by The Who and Buffalo Springfield, Paulsen’s deadpan parodies of clueless or haughty authority figures couldn’t have found a better home. At 38, he was older than most of the cast, which played to his comedic advantage, as did his penchant for suits and ties and unflappable deadpan delivery.

Early in 1968, Paulsen and the Smotherses launched what amounted to the show’s longest and most elaborate performance-art skit: having Paulsen run for president. His persona remained the same, but he was now the official candidate of the STAG (Straight Talking American Government) party. He announced a run and was seen at confetti-strewn rallies. His statements were parodies of a typical campaign’s inane slogans (he called himself “a common, ordinary simple savior of America’s destiny”) and its empty promises (“Will I obliterate national debt? Sure, why not,” he told one crowd). He mocked the charade of schlepping around the country and acting as if he enjoyed it: Everywhere he went, from New York City to Jacksonville, he’d tell the local media this was the greatest city in the country and he wanted to move there. In a foreshadow of Sarah Palin, he coyly denied he was running but visited factories, where he’d ask workers to wear “Paulsen for President” buttons. Even Bobby Kennedy, right before his assassination that June, played along, commenting—with equally deadpan timing–that Paulsen might have “peaked” early on.

As with Colbert at his sharpest, Paulsen’s genius was slipping in remarks that made an actual degree of sense and tapped into a growing sense that people no longer had the power. “Should we continue to spend billions to subsidize foreign military dictatorships or should we concentrate on taking better care of the one we have right here at home?” he announced, straight-faced as always, at one rally. A classic Smothers Brothers clip showed him as literally a “two-faced” politician, his face split in half, each side taking a different side on issues like Vietnam.

Back then, campaign funding wasn’t the issue it is now; in 1968, the phrase “super-PAC” probably meant a case of chewing gum. But playing off a slowly building public awareness of the influence of cash in politics, Paulsen was seen raising funds at lemonade stands, kiss-for-a-quarter offers, and a celeb-studded dinner where Steve Allen, the David Letterman of his day, was a guest speaker. “I expect a lot of them won’t even vote for me,” Paulsen said of the attendees. “The important thing is, I got their money.”

It’s hard to determine now how many votes Paulsen received, since he supposedly refused to put his actual name on state ballots. The official government breakdown for that election only lists the number of write-ins per state, not by candidate. But Paulsen never gave up: He ran every four years, right up to 1996, before dying the following year at age 69 in Tijuana, where he’d been in search of alternative treatment for colon and brain cancer.

The other marginal contenders from that first real year of the wacko candidate are mostly postscripts. George Romney wrecked his campaign by admitting he’d been figuratively “brainwashed” to support the Vietnam War by the U.S. military. (These days, his remark seems absolutely sensible.) Cleaver and his Peace and Freedom party actually received 36,563 votes, but his accomplishments ranged from major (his memoir Soul on Ice) to simply bizarre (he designed a pair of pants with a protruding front “pocket” for a penis). George Wallace was shot by a would-be assassin during the 1972 campaign and was never the same, physically or politically.

Paulsen’s legacy, on the other hand, endures. His was the first post-modern campaign, the first to say out loud what many were starting to think by 1968: That the political process had started to be controlled by forces beyond them, so they may as well consider it a joke in order to keep their sanity. Every time you see Colbert or another future, comedic candidate skewer the process, remember one of Pat Paulsen’s many wise words to an adoring, in-on-the-gag crowd: “I will not claim I will solve all the world’s problems by myself. If I did, I‘d have to run as a Republican or a Democrat.”

David Browne is a contributing editor at Rolling Stone and author of “Fire and Rain: The Beatles, Simon & Garfunkel, James Taylor, CSNY and the Lost Story of 1970” (Da Capo).