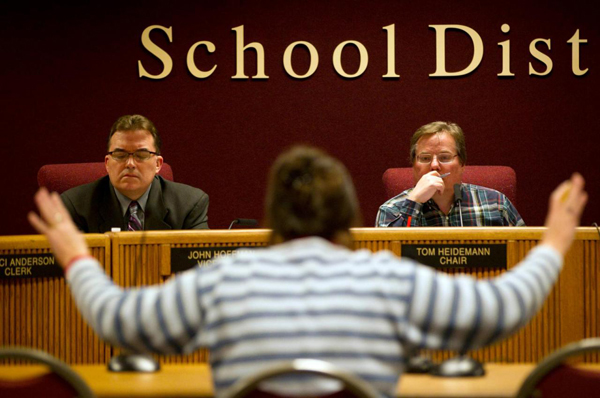 After nine suicides, a federal lawsuit, and the glare of the media spotlight, Minnesota’s Anoka-Hennepin school district has at last rid itself of the policy that helped create a virulently anti-gay environment in its schools. In a 5-1 vote on Monday night, the district’s school board repealed its Sexual Orientation Curriculum Policy, which required teachers to be “neutral” on homosexuality. Teachers throughout the district had been so confused about how to enforce the policy that they’d avoided any mention of homosexuality, even when it meant ignoring anti-gay bullying; the result was a toxic environment in which LGBT students were marginalized, demoralized, and subjected to unchecked torment.

And yet at Monday’s vote, the policy still didn’t go quietly. While 13 parents spoke up during the tense meeting in support of the policy’s removal, a dozen others – some from the anti-gay Parent Action League – argued the policy was critical to protect students from “homosexual propaganda.” PAL’s Barb Anderson darkly warned the board that its vote for gay tolerance “will have a ripple effect for years to come.” Her argument evidently resonated with board member Kathy Tingelstad, who cast the lone vote to preserve the policy, and blamed outside forces for pushing the district to back off.

The Southern Poverty Law Center and the National Center for Lesbian Rights, whose civil rights lawsuit against the school district is still underway, hailed the revocation as “an important step,” noting that this marks the first time in nearly 18 years that the Anoka-Hennepin district doesn’t maintain a policy singling out LGBT issues as taboo. Local gay-rights group Outfront Minnesota is calling the move a win as well. Curiously, though, rather than scratch the policy from its books, the board felt compelled to replace it with yet another policy – called the “Respectful Learning Environment Curriculum Policy.” The new approach dictates that when “contentious” issues arise in class, teachers should make sure to uphold the dignity of all students – regardless of status, including sexual orientation – but also refrain from persuading students to adopt any particular viewpoint. It’s a more gay-friendly policy than “neutrality,” but still distressingly vague, with its odd demand for balanced discussion no matter the topic, which makes Tammy Aaberg, mother of gay suicide victim Justin Aaberg, nervous.

“I’m so happy that the [neutrality policy] has been taken away, but can’t feel excited about the new policy until I see some real change,” says Aaberg, who avoided Monday’s board meeting, saying she couldn’t bring herself to listen to PAL’s “hate speech.” Aaberg would like to see the district follow through on its promises of tolerance by incorporating more training on LGBT issues and bullying. And she wonders why any policy is necessary to micromanage teachers’ speech – especially when it comes to a no-brainer like affirming the dignity of all students, no matter their orientation.