WASHINGTON — I pulled up to the small gymnasium in the town of Sumter, South Carolina, to take the measure of Joe Biden. This was about a year ago, and he was just a candidate then, a beloved former vice president, darling of The Onion, and twice-failed presidential contender who, in the twilight of his career, was making one last go of it.

The air was stale inside the Mt. Zion Enrichment Center, the atmosphere funereal. There were nearly as many members of the media in attendance as there were actual attendees. When I interviewed those few South Carolinians who had come out to hear from Biden, they told me they supported him in the crowded and vibrant Democratic primary field because he would bring back “a sense of normalcy again” and would “maybe get some stuff done in the Senate.” There was no passion behind these statements but rather a cold-eyed pragmatism about where the country stood and what was at stake in the election. “Our democracy is in a very fragile place,” a man named Leo Frazier told me.

The campaign’s hype video wouldn’t play because of tech issues, and so the candidate emerged. “Well, I’m not your video, but I’m OK,” Biden quipped. And then he launched into his stump speech, the same stump speech he’d given since the day he entered the race and more or less the same speech he would give for the remainder of the race.

This is a fight for the soul of the country…

I have the experience…

A few weeks later, the coronavirus pandemic would shut down the country. I listened as Biden laced into President Trump for his dangerous denial about the severity of the virus, punctuating his broadside with a joke: “The virus is not impressed by his tweets.” A few people laughed. Some cringed.

In a field of two dozen younger and more energetic candidates, Biden looked and sounded like a holdover from a bygone era, an anachronism who was jarringly out of sync with the Democratic Party in the year 2020. Joe Biden: the guy who once said nice things about segregationists? Joe Biden: the guy who once argued against school desegregation and forced busing? What chance did a relic like Biden have against competition this fierce? As one political journalist wrote in the fall of 2019, when it looked like Scranton Joe stood no chance of winning the nomination, “Watching Biden can feel like being at the rodeo. You’re there because on some level you know you might see someone get killed.”

At just past noon on Wednesday, January 20th, 2021, Joe Biden stepped up to the microphone to deliver his inaugural address as the 46th president of the United States. “This is America’s day,” he began. “This is democracy’s day.”

He stood on the West Front of the U.S. Capitol, the same place where, two weeks earlier, a mob of Trump fanatics, conspiracy theorists, and violent extremists had attacked the police and forced their way inside the Capitol carrying Confederate flags, brandishing makeshift weapons, and dressed in clothes that said “Camp Auschwitz” and “Q,” for the delusional theory QAnon.

On the occasion of a major speech — a State of the Union Address after a national tragedy, a eulogy after the passing of a beloved figure — we like to ask of our elected leaders: Did they meet the moment? Did she rise to the occasion by capturing a nation’s grief or channeling its anger? Did he match the urgency that was required of him or situate that point in time in its rightful place on the long arc of history?

But what struck me most about Biden’s inaugural address was how much it drew on the themes and ideas that had defined his bid for the presidency from the first. We heard his optimism — that the American story is one “of hope, not fear, of unity not division, of light not darkness. A story of decency and dignity, love and healing, greatness and goodness.” We heard his appeals to unity in the face of tribal divides pulling this country apart, that unity still mattered, that with unity, “we can do great things, important things.”

When so many Americans saw people on the opposite side of the political spectrum as enemies, unrecognizable, and subhuman, Biden the candidate campaigned on the virtues of tolerance, common ground, shared principles. Biden the president carried this message forward, calling for an end to “this uncivil war that pits red against blue, rural versus urban, conservative versus liberal.” He went on, “We can do this if we open our souls, instead of hardening our hearts, if we show a little tolerance and humility, and if we’re willing to stand in the other person’s shoes, as my mom would say. Just for a moment, stand in their shoes.”

Asking whether Joe Biden met the moment in his inaugural address, I realized, was missing the point. The moment had met Joe Biden. 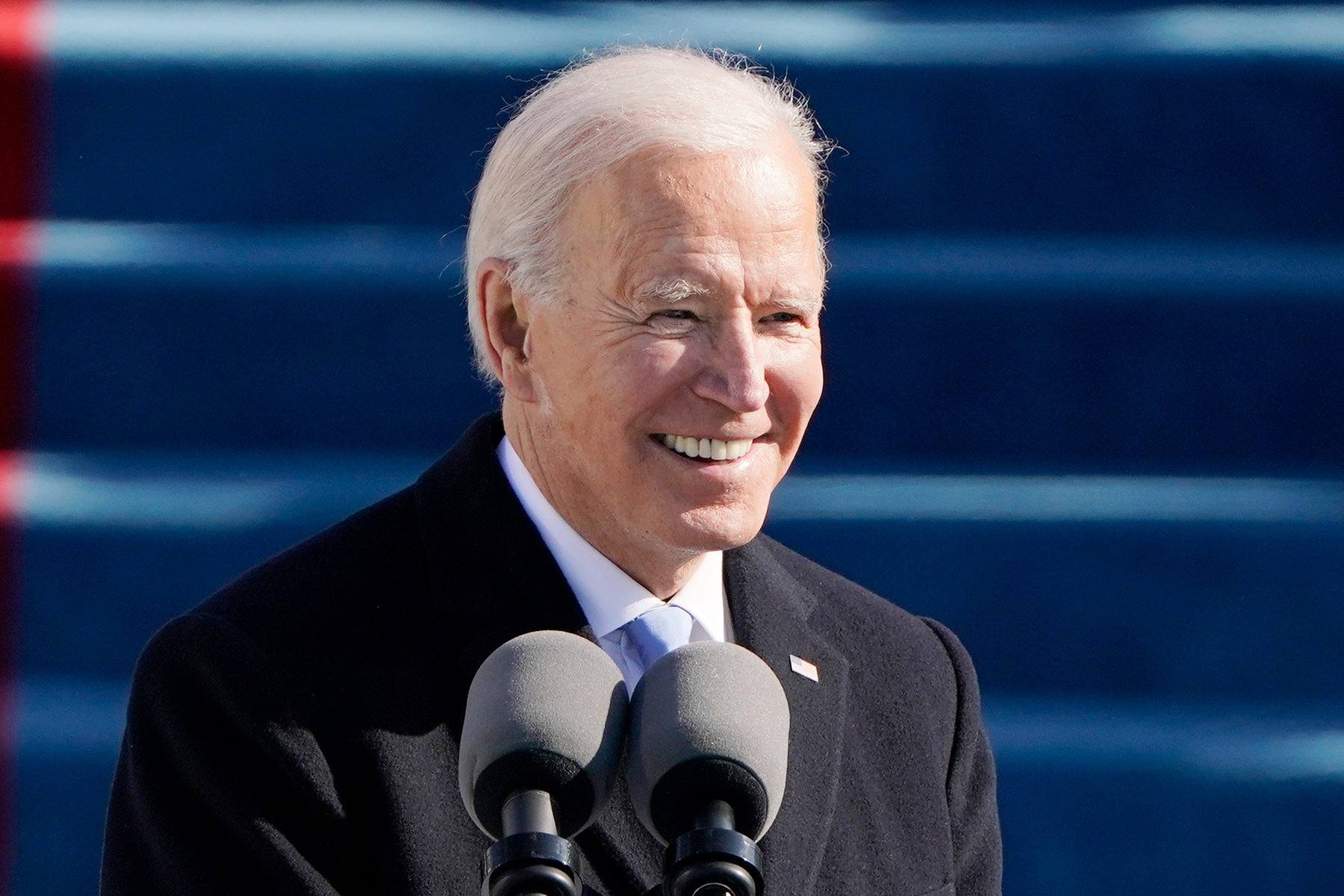 President Biden speaks during the 59th presidential inauguration at the U.S. Capitol in Washington, D.C., on January 20th, 2021.

Before, it felt odd and cheap to hear Biden evoke Charlottesville, Virginia, as the turning point for when he decided to run for president a third time. What connection did he have to Charlottesville? Why that one hideous display of rage and hate as opposed to so many other incidents of violent white supremacy? But we now know that Charlottesville was a prelude, a symptom of an untreated sickness in this country. A clear line can be drawn from the tragedy in Charlottesville to the insurrection at the Capitol on January 6th.

Biden understood this then. And he understands it now when he commits, as he did in his inaugural address, to confront and defeat “political extremism, white supremacy, domestic terrorism.”

Before, Biden sounded old school and kind of hokey when he pledged, over and over and over, that he would “restore the soul of America.” How exactly would he do that? What does that even mean, the “soul” of America? And yet now, after four years of a president who sought to bend reality to his will and who shredded the rule of law, in the aftermath of a presidential election that pushed our democracy to the breaking point and revealed the depths to which members of the Republican Party will sink to preserve their grip on power, it’s hard to argue with a straight face that this country isn’t in dire need of healing, repair, and restoration.

Biden saw this even when others didn’t, when others mocked him for it. And he knows, as he said in his inaugural address, that it will take more than words to begin that healing.

He saw this country clearly. Saw it more clearly, what it was and where it was headed, than many gave him credit for. He couldn’t have predicted the coronavirus pandemic and how it would reshape life in this country and around the world … but then again, he did warn us in October 2019 that the U.S. was not prepared for a global pandemic. He warned us that Trump would try to delay the outcome of the presidential election if he lost the race. And he warned us in August 2020 that Trump’s rhetoric would sow chaos and foment violence.

Biden has been called many things — a visionary is not one of them.

And for good reason: He has never been known as an innovative thinker, as someone who sees around corners. By and large, he is an institutionalist, a creature of the U.S. Senate and the Democratic Party establishment. His strengths are his pathos, his familiarity with grief and his empathy, his ability to get knocked down and stand back up again. Maybe it was these qualities that made him the right man for this dystopic-but-hopeful moment in American history. Or maybe, in the twilight of his life, a lifetime in politics and public life had finally given him the clarity to see where this country was headed and what it needed better than anyone else.

But stump speeches and inaugural addresses are still only words, and words don’t equate to action and results, no matter how inspiring or prescient they are. Barack Obama could tell anyone who’d listen that he would close Guantánamo Bay or end the Iraq War, but neither of those things came true. Trump insisted to the bitter end that he would make Mexico pay for his mythical border wall, and look how that turned out.

And Biden, for as far-seeing as he may have been, will have to reach beyond himself — at least the accommodating moderate Democrat we knew him to be in the U.S. Senate — to translate his vision, such as it is, into real progress as president.

He inherits a collision of crises unlike any president has faced in modern times with the exception of Franklin Delano Roosevelt: an out-of-control pandemic that has killed 400,000 Americans, at a rate of a 9/11 per day; an economic cataclysm that has exacerbated the vast chasm between the superwealthy and the rest of us to French Revolution-style levels; a splitting of the country into reality and anti-reality; an epistemological crisis in which basic facts are questioned, truth is disputed, science is suspicious, and expertise is a scarlet letter.

Judging by his inaugural speech, Biden recognizes what he’s up against and the forces already lining up to stop him. “There is truth, and there are lies,” he said in the speech. “Lies told for power and for profit. And each of us has a duty and a responsibility as citizens, as Americans, and especially as leaders, leaders who have pledged to honor our Constitution and protect our nation, to defend the truth and defeat the lies.” Absent in these words were the gauzy generalities and mindless cant so common from politicians nowadays. Nor was this a warmed-up version of something Obama could have said. Biden’s words and delivery together left no doubt that the diagnosis and prescription were his and his alone.

The moment has met the man. And now, in the four years to come, the president must meet the moment. A final act with the potential to be his finest act. This moment requires nothing less.