It's Too Late to Turn Off Trump - Rolling Stone
×
×

Some people in the news business are having second thoughts this week about their campaign strategy. They’re wondering if they created a monster in Donald Trump.

The LA Times published a piece about how the tone of Trump’s TV appearances has changed, now that’s he’s fully out of the closet as an aspiring dictator, with his plans to ban all Muslims and close the Internet and whatever else he’s come up with in the last ten minutes.

The paper noted that the candidate had unusual trouble on Morning Joe, a show that usually doubles as Trump’s weekly spa treatment:

“Typically, the billionaire TV personality is able to bluster his way through morning talk shows. But Trump had an unusually contentious appearance Tuesday morning on MSNBC’s ‘Morning Joe,’ where co-hosts Joe Scarborough and Mika Brzezinski grilled him on his proposals to keep Muslims out of the U.S….

“‘It certainly puts the burden on the people conducting the interviews to be tougher the more controversial his comments are,’ Scarborough told The Times after the exchange.”

America Is Too Dumb for TV News

The paper went on to dig in to the ethics of covering Trump:

“Trump represents something of a quandary for the media, especially TV networks. Privately, TV news producers acknowledge that Trump has turbocharged their ratings…”

Essentially, TV news producers are wondering: “How do we keep getting the great ratings without helping elect the Fourth Reich?”

In the same piece, Joe Scarborough said the problem was that Trump gives such great access to the media, just like John McCain did in 2000. “When John McCain was letting members of the press on his Straight Talk Express bus,” Scarborough explained, “other Republicans always said he got the benefit of the doubt.”

In other words, Trump is so open and accommodating with the press that it makes it hard for reporters to hammer his insane ideas. Scarborough doesn’t seem to realize it, but that’s a pretty damning admission.

There are some people now who are urging the media to ignore Donald Trump, and simply not cover him. But it’s a little late for that.

The time to start worrying about the consequences of our editorial decisions was before we raised a generation of people who get all of their information from television, and who believe that the solution to every problem is simple enough that you can find it before the 21 minutes of the sitcom are over.

Or before we created a world in which the only inner-city black people you ever see are being chased by cops, and the only Muslims onscreen are either chopping off heads or throwing rocks at a barricades.

This is an amazing thing to say, because in Donald Trump’s world everything is about him, but Trump’s campaign isn’t about Trump anymore. With his increasingly preposterous run to the White House, the Donald is merely articulating something that runs through the entire culture.

It’s hard to believe because Trump the person is so limited in his ability to articulate anything. Even in his books, where he’s allegedly trying to string multiple thoughts together, Trump wanders randomly from impulse to impulse, seemingly without rhyme or reason. He doesn’t think anything through. (He’s brilliantly cast this driving-blind trait as “not being politically correct.”) 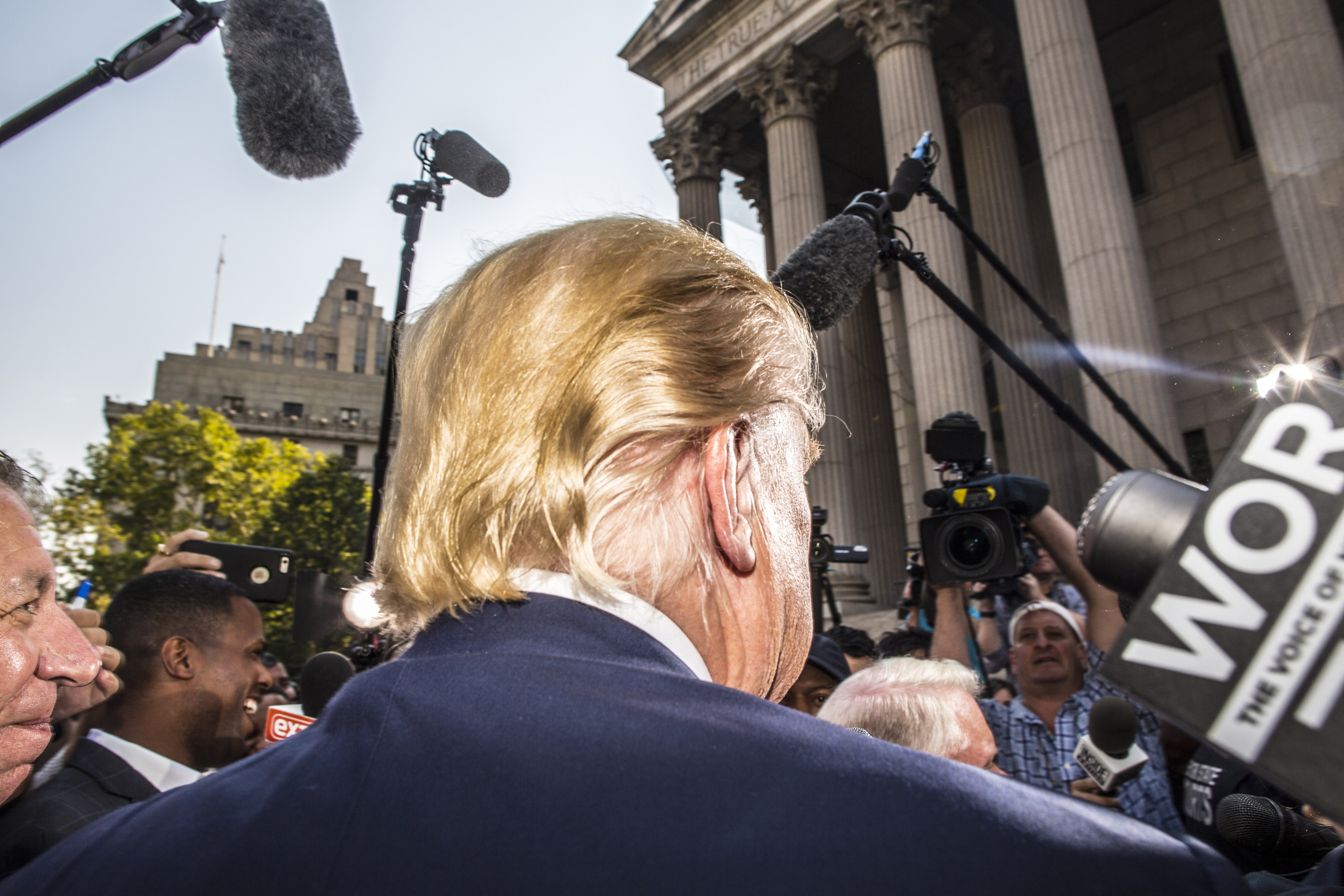 It’s not an accident that his attention span lasts exactly one news cycle. He’s exactly like the rest of America, except that he’s making news, not following it – starring on TV instead of watching it. Just like we channel-surf, he focuses as long as he can on whatever mess he’s in, and then he moves on to the next bad idea or incorrect memory that pops into his head.

Lots of people have remarked on the irony of this absurd caricature of a spoiled rich kid connecting so well with working-class America. But Trump does have something very much in common with everybody else. He watches TV. That’s his primary experience with reality, and just like most of his voters, he doesn’t realize that it’s a distorted picture.

If you got all of your information from TV and movies, you’d have some pretty dumb ideas. You’d be convinced blowing stuff up works, because it always does in our movies. You’d have no empathy for the poor, because there are no poor people in American movies or TV shows – they’re rarely even shown on the news, because advertisers consider them a bummer.

Politically, you’d have no ability to grasp nuance or complexity, since there is none in our mainstream political discussion. All problems, even the most complicated, are boiled down to a few minutes of TV content at most. That’s how issues like the last financial collapse completely flew by Middle America. The truth, with all the intricacies of all those arcane new mortgage-based financial instruments, was much harder to grasp than a story about lazy minorities buying houses they couldn’t afford, which is what Middle America still believes.

Trump isn’t just selling these easy answers. He’s also buying them. Trump is a TV believer. He’s so subsumed in all the crap he’s watched – and you can tell by the cropped syntax in his books and his speech, Trump is a watcher, not a reader – it’s all mixed up in his head.

He surely believes he saw that celebration of Muslims in Jersey City, when it was probably a clip of people in Palestine. When he says, “I have a great relationship with the blacks,” what he probably means is that he liked watching The Cosby Show.

In this he’s just like millions and millions of Americans, who have all been raised on a mountain of unthreatening caricatures and clichés. TV is a world in which the customer is always right, especially about hard stuff like race and class. Trump’s ideas about Mexicans and Muslims are typical of someone who doesn’t know any, except in the shows he chooses to watch about them.

This world of schlock stereotypes and EZ solutions is the one experience a pampered billionaire can share with all of those “paycheck-to-paycheck” voters the candidates are always trying to reach. TV is the ultimate leveling phenomenon. It makes everyone, rich and poor, equally incapable of dealing with reality.

That’s why it’s so ironic that some people think the solution to the Trump problem is turning him off. What got us into this mess was the impulse to change the channel the moment we feel uncomfortable. Even if we take the man off the air, the problem he represents is still going to be there, just like poverty, corruption, mass incarceration, pollution and all of the other things we keep off the airwaves.