Thomas Piketty, the French economist whose 2013 bestseller Capital in the 21st Century awoke upscale Americans to the shocking news that their economic system was not working for everyone, has written a new paper exposing more uncomfortable truths.

Even though the three countries have different systems, all three feature electoral showdowns for executive power that broadly come down to “left” versus “right” factions.

A remarkable feature is how mathematically balanced these elections have been over the years. Piketty notes that even in France, whose final votes involve coalitions of multiple minority parties, the widest disparity observed in recent history involved splits of ten points (De Gaulle vs. Mitterand in 1965) and eight (Mitterand vs. Chirac in 1988). More often, he notes, the splits have been 51-49, 52-48, etc.

Taibbi: The Legacy of the Iraq War

This mimics the remarkable closeness of American elections. Four times in recent history, we’ve had presidential elections end either in nearly perfect statistical ties (Kennedy-Nixon in 1960, Nixon-Humphrey in 1968) or in contests close enough where there was a disparity between electoral and popular votes (Bush-Gore 2000, and Clinton-Trump 2016).

As Noam Chomsky wrote after the Bush/Gore fiasco, about the only scenario where you’d expect to see a contest of a hundred-plus million voters end in a statistical tie would either be a completely random process, or one where voters were asked to make a choice about something totally unrelated to their lives, like the presidency of Mars.

That we’ve had the flipped coin land virtually on its side so many times has always suggested something was off about our political system. Piketty now hints at what that was.

He writes that across all three countries, we’ve seen the evolution of the same trend. Fifty or sixty years ago, voting with the “left-wing” side (which he terms the socialist/labour/democratic parties) tended to be associated with low income and low education. Conversely, high education and high-income voters in all three countries voted right.

Over the years, however, the “left-wing” has become more and more associated with higher-education voters, giving rise to what he calls a “multiple-elite” party system.

According to Piketty, in 2016, for the first time – and of course some of this has to do with the unique repugnance of Donald Trump – the upper 10% of voters, sorted by income, voted Democratic.

Piketty just puts numbers behind an observation that anyone covering recent American presidential elections could have made: That huge pluralities of voters on both sides of the aisle feel unrepresented and even insulted, and increasingly see both major parties as tools of the very rich.

His belief is that a major reordering of the political landscape is coming. It will be based less on traditional notions of right and left, and more along the lines of what he describes as “globalists (high-education, high-income) vs. nativists (low- education, low-income).”

Nearly seven years ago, I was sent to cover two different stories within the space of a few days that illustrated this. The first was a recap of the Occupy Wall Street protests at Zucotti Park. The second was a trip down to Jacksonville, Florida for a tour of “rocket docket” foreclosure courts that had been set up to expedite the process of tossing poor people out of their homes.

The Occupy protests accomplished one extremely important thing. They popularized the terms “The 1%” and “the 99%.” 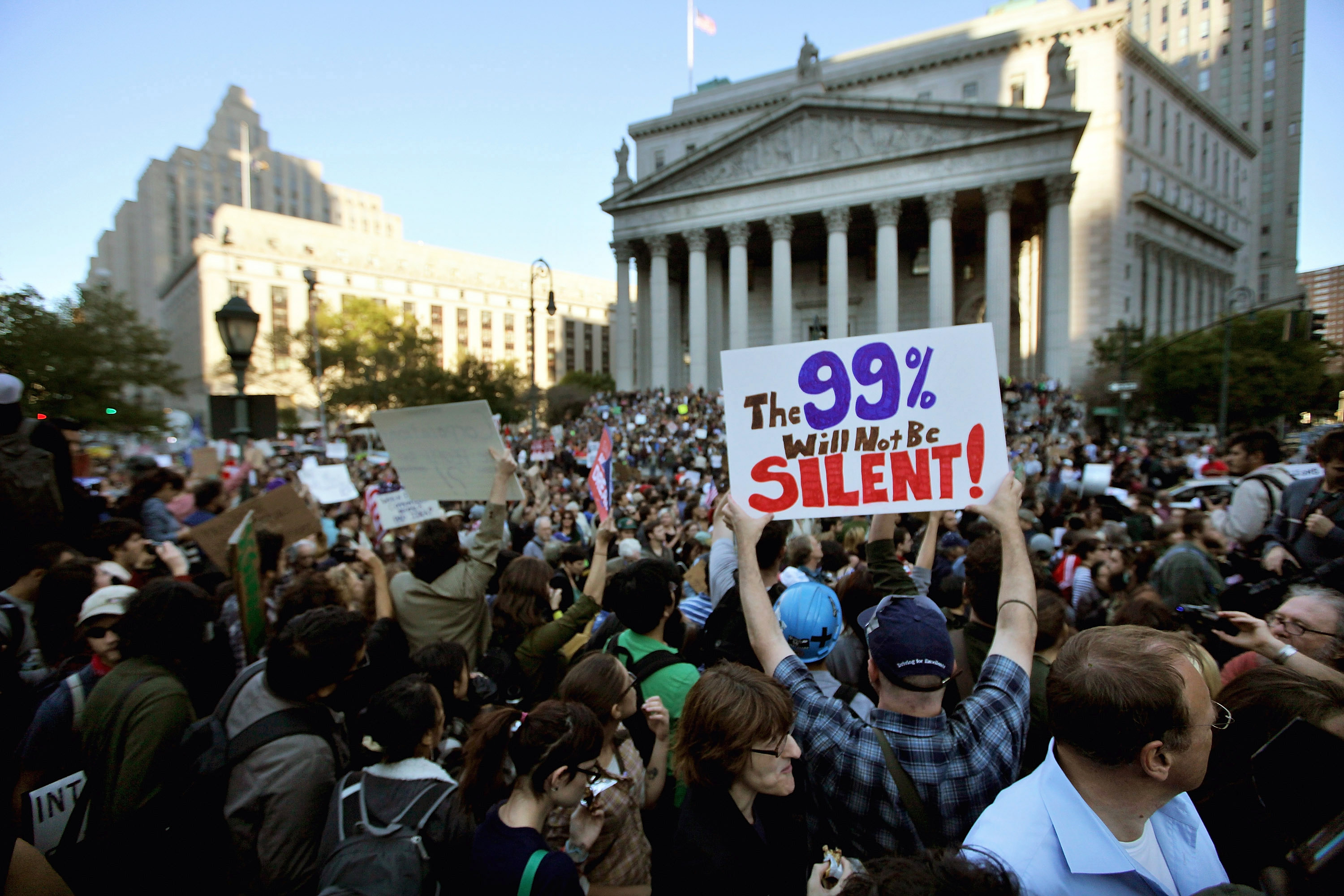 This simple idea, that the real split in American society was less like 50-50 and more like 99-1, was completely logical in a country where the top 1% owns more wealth than the bottom 90%.

The protesters’ demographic critique implied that whatever we’ve been voting about, it hasn’t had a lot to do with economics. It also seemed to mean that the wealthy have somehow been seriously over-represented at the polls for ages.

The people at Zucotti were mainly what you might describe today as Sanders Democrats. They tended to be socially liberal, educated, and full of feelings of being left out.

An example was an organic farmer from Vermont who talked with disdain about the money the Democrats took from big agribusiness corporations who were his competition. This theme, that big money owned both parties, was prevalent at the demonstration.

In Jacksonville, people were being thrown out of their homes by a hi-speed foreclosure court that shamefully swallowed without protest the robo-signed or phony documentation offered by banks and lenders. The victims in these courtrooms were not, by and large, the same people as the kind you’d find at an Occupy Protest.

They were overwhelmingly either the ethnic poor – predatory mortgage lending disproportionately targeted people of color – or what pundits today would derisively call the “white working class.” Both of those groups were there together, however, victimized by the same malefactors.

The pure rage and sense of abandonment in those courts was striking. This group of people experiencing a system stacked against them was not interested in elaborate explanations of how the foreclosure crisis evolved. Most were focused on questions like, “Where are my kids going to sleep tonight?”

If I’d even tried to bring up, say, a foreign policy question in that room – So, now that you have no house, what do you think about the future of the EuroZone? – I might have had my teeth knocked out.

It was clear that if all of these groups ever started to align with each other – the Occupy types and, say, the victims of the foreclosure crisis – you’d have revolution, and probably a pretty quick one, given the numbers involved.

Fast-forward four years, to the beginning of the 2015-2016 presidential election campaign. All of the trends described by Occupy had worsened significantly.

Income disparity was worse. The gap in criminal justice outcomes was worse (especially after the 2008 crash criminals were let off wholesale). Indebtedness was worse. Even political influence was now significantly more imbalanced, after the Citizens United decision. People everywhere, even on the right, were angrier about all of it.

A few establishment voices, like Jimmy Carter, eventually pointed to these factors when asked to explain the rise of Trump. But most pundits dismissed the discontent over these things as mere low-information stupidity, which played right into Trump’s hands.

Candidate Trump’s solutions were all lies. But his stump presentation hammered home an unfortunately true observation that politicians in both parties had incentives not to care about them, because they were sponsored by the same mega-donors.

From pollsters to think-tank analysts to pundits, the Beltway pros have not only consistently underestimated these feelings of disenfranchisement; they’ve consistently over–counted their own numbers.

This week, for instance, the New York Times ran a piece pointing to new evidence that pollsters in 2016 made massive errors. Some exit polls in November of 2016 had the number of college graduates of all races representing more than 50% of voters. But a recent Pew study says the number was closer to 37%.

America, like pretty much everyplace else in the neoliberal world, is becoming a society split up into unequal camps. We have an extremely small group of very rich people, and a much larger group of everyone else, who may or may not be educated, but increasingly have either zero net worth, or close to it.

The numbers are getting harder to ignore.

American politicians for decades have done an outstanding job of keeping low-income voters from seeing their shared economic dilemmas. The Republicans dating back to Goldwater and Nixon have kept voters transfixed with race hatred and fears about things like gun control, while Democrats have emphasized the Republican threat on social issues like reproductive rights and Social Security.

But having two parties sponsored by the same donors simply can’t work in the long-term. The situation ends up being what a Colombian politician once deemed “two horses with the same owner.”

From Mitt Romney’s idiotic tirade against “the 47%” to Hillary Clinton’s recent remarks about how she won all the “dynamic” parts of America, our political leaders have consistently showed that they don’t see or understand the levels of resentment out there.

Papers like Piketty’s are a warning that if the intellectuals in both parties don’t come up with a real plan for dealing with the income disparity problem before someone smarter than Donald Trump takes it on, they’re screwed. Forget nativists vs. globalists. Think poor vs. rich. Think 99 to 1. While Washington waits with bated breath for the results of the Mueller probe, it’s the other mystery – how do we fix this seemingly unfixable economic system – that is keeping the rest of the country awake at night.