Is JPMorgan Chase Profiting Off of Forced Evictions in China? - Rolling Stone
×
×

In recent years, forced evictions have become a flashpoint for demonstrations across China. International watchdogs have called the practice a human rights emergency on a massive scale. Often carried out in coordination with cash-strapped local governments, these evictions have “resulted in deaths, beatings, harassment and imprisonment of residents who have been forced from their homes across the country in both rural and urban areas,” according to a 2012 Amnesty International report. “With no access to justice some have turned to violence or even self-immolation as a last resort.”

Amid this heated debate, several overseas bond-selling documents show that some of America’s largest banks, including JPMorgan Chase, have helped to raise money for Chinese real estate companies that have expended considerable resources on demolishing buildings and “relocating” people for their recent projects in China. (It’s important to note that the revelations in these documents do not necessarily point to the level of the injustices in the Amnesty report.) Two bond-selling documents, both marked ‘Strictly Confidential’ but uploaded to the website of Singapore’s stock exchange, state that, in 2012 alone, a company with bond sales facilitated by banks like JPMorgan Chase and Citigroup called Kaisa Holdings devoted more than $1 billion RMB, or $160 million USD, to “demolition and resettlement” costs relating to its real estate projects. Other overseas bond documents show that in recent years, Bank of America and JPMorgan Chase helped to sell bonds for a Shanghai-based real estate firm called Future Holdings, which spent $131 million RMB on demolition and resettlement costs in 2011. Dispelling any notion that Future Holdings and Kaisa Holdings might be engaging in some sort of happy form of human relocation, both documents use similar language to make clear that disputes with original inhabitants of land they buy might cause “protests or legal or other proceedings.”

The bond-selling documents reviewed by Rolling Stone contain similar or identical language regarding demolition and resettlement issues. Judging by the documents, it appears as somewhat standard for Chinese real estate companies to include such warnings to potential investors about having to relocate people for development projects. Each document makes some mention of compensation for residents who become the subjects of resettlement. The Future Holdings document indicates the duty to dispense such payments is often up to the local authorities involved, while Kaisa speaks of paying residents directly. “The compensation we pay for resettlement is calculated in accordance with certain formulas published by the relevant local authorities,” the Kaisa document states.

Few of the thousands of demonstrations against land dispossession around China each year receive media attention. A major exception is the coastal city of Wukan, where residents facing mass resettlement overthrew the local government after a local anti-eviction advocate died under suspicious circumstances while held by Chinese authorities. The New York Times identified a large Chinese real estate company named Country Garden  as a player in attempting the massive land-grab that triggered the 2011 uprising (Country Garden denied any involvement). In 2013, JPMorgan Chase, along with Goldman Sachs, facilitated a round of bond-buying for Country Garden, according to Reuters. (A prospectus draft indicates that the two banks assisted with another round of funding for the bank in 2014.)

JPMorgan Chase’s website displays a lofty statement on fostering human rights across the globe, citing standards on “land acquisition and resettlement” in particular. In 2011, the bank filed a similar statement in a letter to the SEC. Citigroup also has a human rights statement on its website that points to land acquisition and involuntary resettlement. Yet JPMorgan Chase declined to answer Rolling Stone‘s questions about whether it has examined the resettlement practices of Future Holdings and three other Chinese real estate companies. 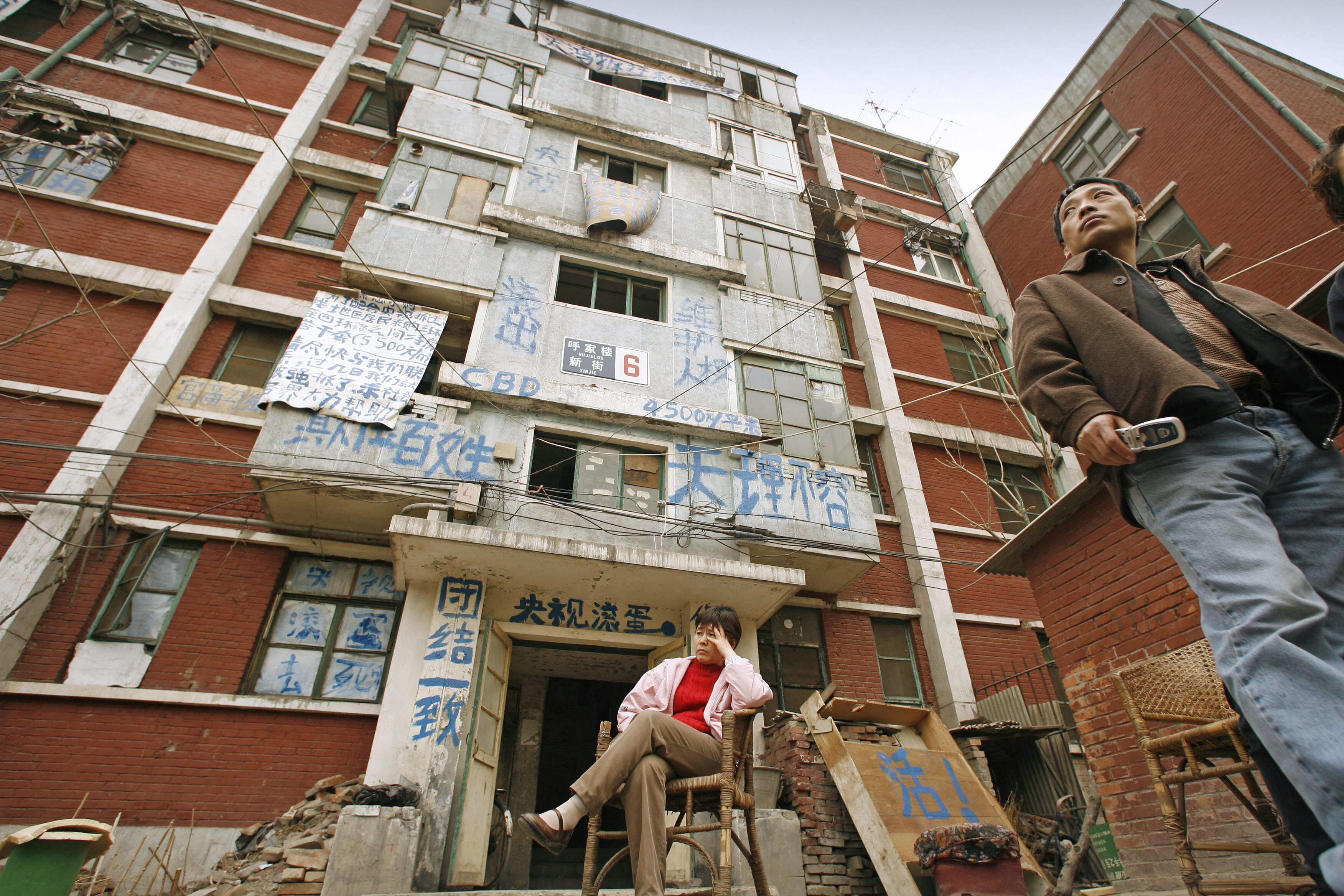 JP Morgan Chase and Citigroup also refused to say whether their involvement with the Chinese real estate projects complies with their human rights statements. Goldman Sachs also declined to comment in response to Rolling Stone‘s questions, as did Credit Suisse and Bank of America.

For investors seeking to grow their fortunes, China’s real estate market possesses the advantage of providing few meaningful legal protections for poor people living on desirable property. Taken in combination with the country’s expanding upper class and a speculation-fueled real-estate market, this has created what is perhaps one of the world’s least humane forms of gentrification. “The vast majority of the new rich [in China] are making it on land grabs — most in real-estate development, some in industrial development — and many of them are cooperating very actively with international capital,” says Joshua Muldavin, a professor of human geography at Sarah Lawrence College who has studied land issues in China for more than 30 years. “This often becomes just a ‘China story,’ but I see it as a part of much larger global processes happening on Chinese territory.”

Future Holdings has recently delivered dazzling profit growth, from $387 million USD in 2010 to $936 million USD in gross profits in 2013, according to BusinessWeek market data. The company boasts of its command over the affluent real estate markets along the lower Yangtze River region, and its popular residential lines go by names like ‘PrestigeHomes,’ ‘DreamHomes’ and ‘SweetHomes.’

In recent years, human rights groups have accused JPMorgan’s dealings of being on the-not-entirely-right side of some issues. In the wake of the 2008 financial crisis, the bank came under fire for its evictions here in the United States of homeowners who had been swept up in bad mortgages. In 2012, a group of the bank’s shareholders called for JPMorgan to withdraw its investment from a Chinese oil company believed to be supporting the genocide in Sudan.

The Future Holdings bond prospectuses indicate that the company relies on the well-documented practice of using local governments in China to remove residents from buildings marked for demolition. “Four of our projects held for future development were required to demolish existing buildings, resettle existing residents and construct basic infrastructure,” one document states. “The respective local government authorities, which are responsible for the demolition, resettlement and construction work, had not completed such work as scheduled[…]”

Some particularly resilient targets of eviction in China have won international attention for steadfastly refusing to leave their homes (and for the images of their tattered homes jutting oddly out of massive construction projects.) In an apparent nod to this eventuality, the bond-selling documents warn that, in some cases, “Dissenting owners and residents may also refuse to relocate,” adding that such speed bumps have the potential to harm Future Holdings’ cash flows.

“The relocation of residents and demolition of existing buildings can be highly complex and emotional, which may substantially delay the development progress of our projects,” reads a 2009 overseas bond-selling prospectus for BBMG Corporation. This document lists UBS bank as the sole global coordinator and JPMorgan along with two other banks as joint book-runners on the bonds. “We may suffer damage to our reputation as a result of bad publicity generated from any resistance on the part of residents to relocate.”

The Future Holdings, BBMG and Kaisa bond documents are solicitations to potential bond buyers. In each of those cases, JPMorgan’s U.K.-based securities brokerage helped facilitate those deals. The other Future Holdings document was led by Merrill Lynch, Bank of America’s wealth management subsidiary. In 2012, according to Reuters, Merrill Lynch helped to facilitate Future Holdings’ initial public offering, which raised $265 million USD – 90 percent of which was set aside for Future Holdings to buy new land.