How the NRA's Florida Strategy Failed After Parkland - Rolling Stone
×
×

On March 1st, Gov. Rick Scott did something shocking. He showed up unannounced on the floors of the Florida state Senate and House of Representatives and asked lawmakers to break from their business to hear from a supporter of gun control. A week earlier, Scott had urged lawmakers to draft a bill to curtail mentally ill people’s access to firearms, beef up school security, ban bump stocks (a device used in the Las Vegas massacre to make semiautomatics mimic machine guns) and raise the minimum age to buy a long gun in Florida from 18 to 21. The first two measures weren’t too controversial. But the bump-stock ban, and suggesting people should be old enough to legally drink alcohol in order to buy an assault rifle, were acts of political treason. It marked the first time that Scott, whom the National Rifle Association has praised for signing “more pro-gun bills into law than any other governor in Florida history,” has defied the gun lobby. Scott’s guest was Ryan Petty, whose 14-year-old daughter, Alaina, was among the 17 shot and killed in the February 14th massacre at Parkland’s Marjory Stoneman Douglas High School. “I’m here to speak in favor of what the governor is proposing,” the grieving father said. “Let’s set aside our differences and make sure our schools are safe. With your help, Florida can lead.”

The NRA Can Only Be Stopped at the Ballot Box

Immediately after the Parkland massacre, Scott – who is eyeing a run for U.S. Senate in November – stuck to the gun lobby’s script, tweeting, “My thoughts and prayers are with the students, their families and the entire community.” He called on the director of the FBI, which had not followed up on a tip about the gunman, to resign. “The FBI’s failure to take action against this killer is unacceptable,” Scott said. Even after students took buses to the state Capitol, and wept as legislators refused to debate an assault-weapons ban, the governor’s office only promised to roll out a legislative proposal “aimed at keeping Florida schools safe and keeping firearms out of the hands of mentally ill people.” That day, a Washington Post headline read, Florida Gov. Rick Scott stays in sync with the NRA as he faces a reckoning on guns.

With some of the most permissive firearm laws in the country, the Sunshine State is often referred to as the Gunshine State. It is the birthplace of “concealed carry” (the right to pack a firearm in public) and “stand your ground” (the right to use lethal force on anyone you believe might hurt you). About 1.7 million people in Florida have obtained a concealed-carry license (more than in any other state). But the truth is, most Floridians are not pro-gun extremists, says Joe Henderson, a columnist for FloridaPolitics.com. According to one study, less than a third of state residents have a firearm; Florida ranks 24th in the nation in percentage of gun-owning adults. “Only about 300,000 Florida residents are NRA members,” says Henderson. “That’s a whopping 1.5 percent of the population.”

The NRA puts the fear of God into politicians the old-fashioned way, says Brad Coker, managing director of Mason-Dixon polling: “They’ll primary your ass.” Nearly 50 percent of NRA members have contacted a public official about gun policy; overall, only 37 percent of Americans can even name a person who represents them in Congress. The founder and chief of the gun lobby’s Florida chapter, a 78-year-old great-grandmother named Marion Hammer, has leveraged her membership lists to pass dozens of landmark gun laws, including “concealed carry” and “stand your ground.” By most accounts, Hammer, formerly the NRA’s first female national president, is the most influential lobbyist in the state. Headlines about the governor cowing to the NRA – by blaming mass shootings on feeble mental-health laws, rather than on lax gun control – are, in essence, reporting on her work in the back rooms of the Florida Capitol.

In 2013, I spent a few days with Hammer as she pulled the levers of power in Tallahassee. The shooting deaths of 20 first-graders and six teachers at Connecticut’s Sandy Hook Elementary School had unfolded a few months earlier, and the NRA was once again on the defensive. At the time, support for universal background checks soared. Key Republicans came out in favor of gun restrictions. The NRA’s CEO, Wayne LaPierre, freaked out. In a 2013 Daily Caller op-ed, he wrote, “If the country is broke, there likely won’t be enough money to pay for police protection. . . . It’s not paranoia to buy a gun. It’s survival.” Hammer wanted to give me a behind-the-scenes look at how the NRA was working to stop gun violence. 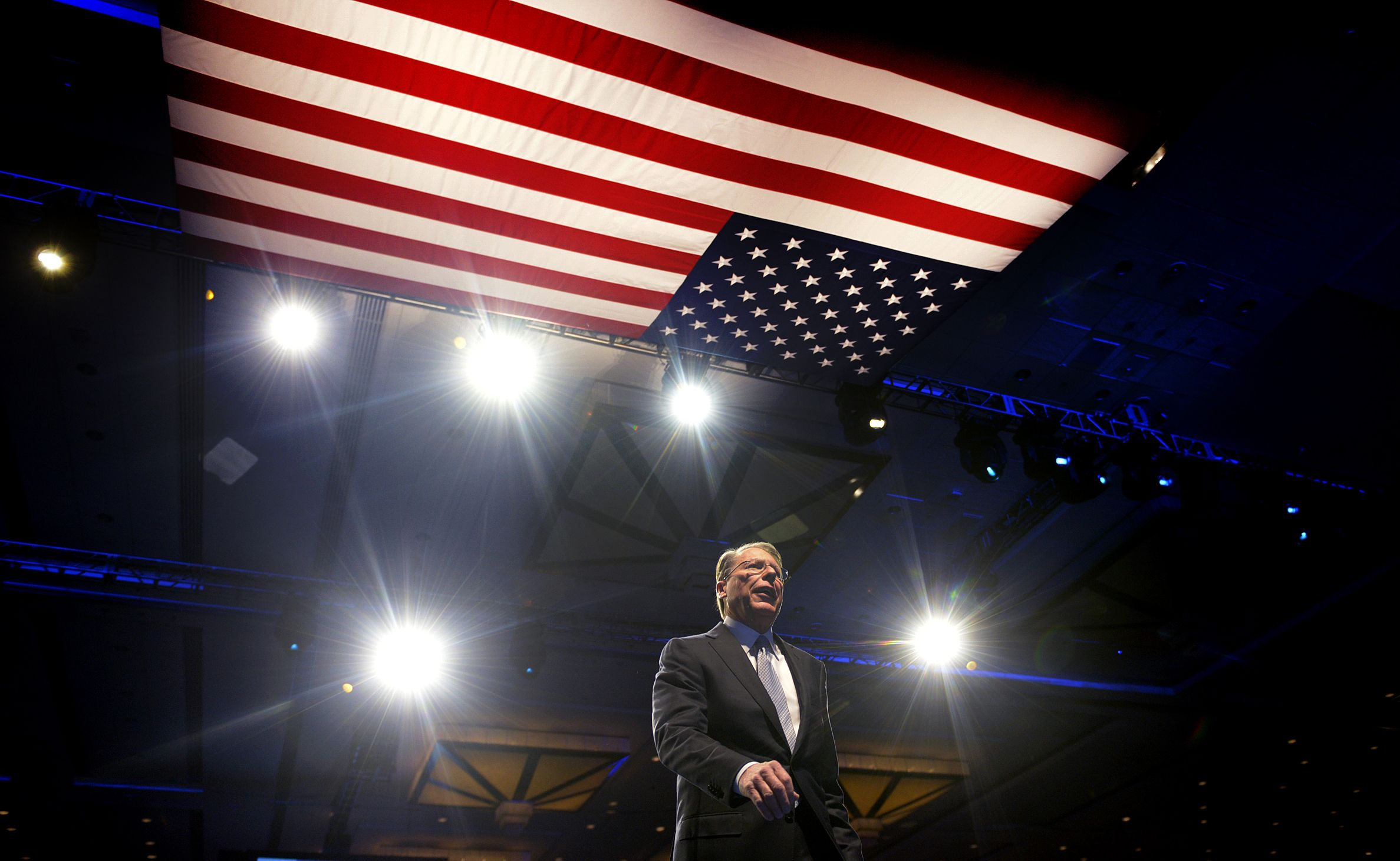 In Florida, Hammer – an elfin woman with bright-blue eyes, a stature south of four feet 11 and a signature bowl-cut – was treated like a rock star. As I followed her through the Capitol’s metal detector (guns are allowed in the building’s common areas and offices, but not during legislative meetings), people began exclaiming, “Miss Hammer!” “Miss Marion!” and even just “Wow!” They spontaneously cleared a path to an elevator. Inside, Greg Evers, a state senator from Okaloosa County, broke the hushed awe. “I have to tell my story,” he said. “One night we were late here after a vote, and I offered to walk Miss Hammer to her car. She said, ‘Oh, don’t you worry about me. I’m safe enough.’ She opened her bag and there was her .38 Special!” Charmed laughter filled the cabin. An exuberant woman hugged Hammer, who responded with a tight body and a tolerant smile. The elevator doors opened, Evers started to exit – then stopped to kiss Hammer’s hand. “I know,” she muttered to me. “It’s ridiculous.”

In the aftermath of Sandy Hook, Hammer drafted the state’s single new restriction. She and I visited the office of the Florida representative who introduced the bill, Barbara Watson, a Democrat from Miami Gardens, where Trayvon Martin’s family lived. Watson, who had been in office one month, took out a draft of a bill to prohibit people who are voluntarily committed to a mental institution from buying firearms in Florida. “The key thing to let your allies know,” Hammer told her, “is that this language is very sensitive. It has been worked on by a judge, by me, by the Florida Department of Law Enforcement, and the FBI. Nobody can monkey with this language.”

While Watson introduced the mental-health bill, Hammer sat in her office fielding calls from one legislator after another: “Yes, we’re really behind it”; “No, you will not get in trouble.” Messages started to pile up: “Marion, it’s Rick Scott. Will you call me back, please?” With Hammer’s assurances, the Florida House and Senate passed Watson’s bill, and Scott signed it into law. By 2014, the gun lobby had raised Scott’s NRA grade to A-plus.

Hammer pursued a similar strategy in the wake of Stoneman Douglas. The Florida state Legislature, which meets only 60 days a year, had rarely been in session during a headlining mass shooting. GOP legislators stayed in line for the vote on an assault-weapons ban. Florida’s Republican representatives already knew where Hammer stood on bump stocks. After the Las Vegas shootings in October, she wrote to her charges, “The enemies of freedom and the Second Amendment are spewing hysteria from the podiums they have planted in the blood of innocent victims.” Behind the scenes, she and the NRA advocated a pair of policy directions: a focus on mental health, and “hardening” schools by arming teachers. 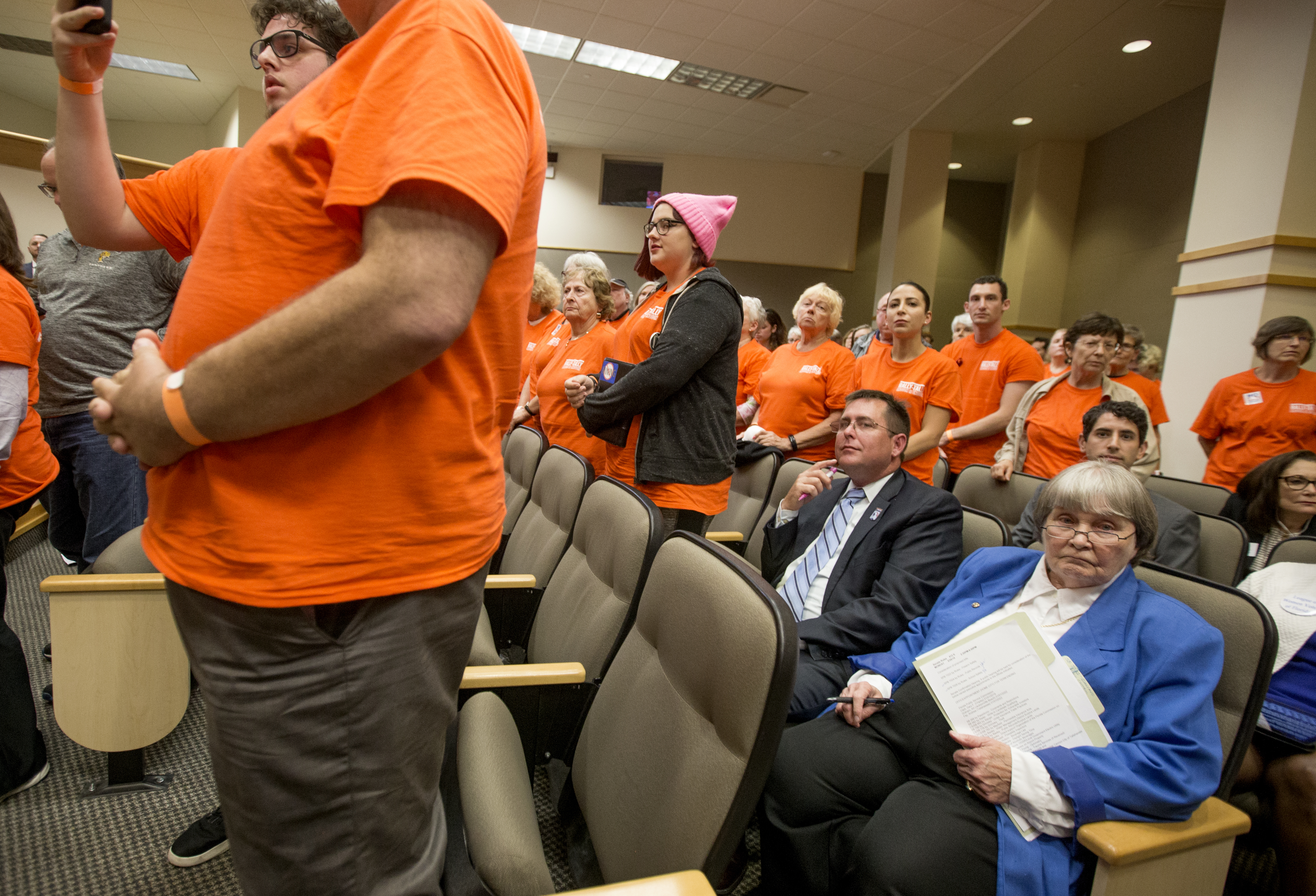 Then the #NeverAgain movement took over social media. Celebrities made $500,000 donations for a March for Our Lives event to be held on March 24th in Washington, D.C. A poll showed Scott four points behind his rival for the Senate, incumbent Democrat Bill Nelson. Faced with an army of traumatized, grief-stricken, outraged children, says Henderson, the Florida journalist, “How do you go around campaigning for statewide office as the NRA’s lap dog?”

On February 23rd, the governor went rogue, advocating to keep assault weapons out of the hands of teenagers. The proposal, Hammer told a reporter, is nothing more than “political eyewash” that will only “punish law-abiding gun owners.” “When you’re 18 years of age, you can go overseas and die for your country,” she added. “How can they say we don’t trust you to buy a gun?” Two weeks later, state lawmakers passed a bill that bans bump stocks, imposes a three-day waiting period and raises the minimum age to buy assault rifles, and allows schools to arm staff members. When I e-mailed Hammer for an interview, she wrote, “I’m in the middle of an ugly, orchestrated attack on me, the NRA and law-abiding gun owners. Don’t even think about it until session is over.”

As this story went to press, Scott had not yet signed the bill. His likely Senate run, though, seems to have loosened Hammer’s grip on him. Current political polls show that two of three Floridians support stronger gun restrictions, and the Senate race is now within the margin of error. Without a serious challenger in the GOP primary, Scott has tried to get ahead of his general-election opponent – a Democrat with an F rating from the NRA for supporting universal background checks and a ban on assault weapons. “Bill Nelson hasn’t done anything on gun safety or school safety,” Scott recently told reporters, inaccurately, “and nothing on gun control.”

The lesson, says a longtime Florida GOP strategist, is
not whether children or a lobbyist are able to claim the ear of an elected
leader who bends with the political wind – it’s that voters can. “People
think the NRA is powerful because of money,” the Tallahassee vet says. “They
get discouraged about the NRA because they think a special interest is
controlling things. I’m telling you with all my heart, the NRA is the least
special-interest. They are an example of the power that comes from motivated
voters. If this world would ever figure that out – if people became active voters
on an issue – it’d be revolutionary.”

Leaders of the NRA offered a defense for gun rights during the Conservative Political Action Conference. Watch below.