On October 25th, the United Nations convened a panel to discuss the United States’ controversial overseas drone strike programs. The speakers included human rights advocates, legal scholars and special rapporteurs, all of whom called for the U.S. to make its drone policy more transparent and accountable. But the most moving statement came from Brandon Bryant, a former U.S. Air Force drone operator who logged thousands of hours firing remote missiles at distant targets in Afghanistan and Iraq over six years. “At the end of our pledge of allegiance, we say ‘with liberty and justice for all,'” said Bryant, who has been diagnosed with post-traumatic stress disorder as a result of his time as a drone operator. “I believe that should be applied to not only American citizens but everyone we interact with as well – to put them on an equal level and treat them with respect.”

Two days later, Rafiq ur Rehman sits with two of his children in a hotel conference room in Washington, D.C., along with a translator, a lawyer from the human rights charity Reprieve, the filmmaker Robert Greenwald and me. The Pakistani family – Rafiq, 39, his son Zubair, 13, and his daughter Nabeela, 9 – traveled from their village in North Waziristan this month to tell Congress the story of Rafiq’s mother, Mamana Bibi, who was killed by what was almost certainly a U.S. drone strike on October 24th, 2012. Mamana, a midwife, was picking okra near her family’s house when a missile struck her directly, blowing her to pieces. The two children were both in the field and saw the missile strike their grandmother. “When [the missile] hit, we couldn’t tell the difference between night and day,” says Zubair. “It was day before and it immediately became dark, and I couldn’t see my grandma anymore.”

Zubair was close enough to be hit by shrapnel from the strike. “I felt on my left leg a burning sensation and I didn’t know what had occurred,” says the teenager, lifting up his pant leg to reveal a four-inch scar. “So I just started to run.” His younger sister was in the field gathering okra as well, and was also hit by shrapnel. “When I looked down I saw my hand was bleeding,” Nabeela says. “I tried to wipe it off but the blood wouldn’t stop.”

Following the first strike, the other children in the house ran outside, at which point a second missile struck nearly the exact same spot as the first. Nine children in total were injured, according to Reprieve lawyer Jennifer Gibson.

Rafiq – who works as a teacher at the local primary school – was at the market getting food to celebrate the Muslim holiday Eid ul-Adha when his mother was killed. When he returned to his village, he tells me, he saw his neighbors standing around a freshly dug hole in a plot of land reserved for his family in the graveyard. A young boy told him that the mother of Latif Rehman had been killed; the boy didn’t know that Latif is Rafiq’s older brother. His children, Zubair and Nabeela, had been taken to the hospital, but at first, Rafiq says through the translator, “I thought I lost them too.”

All three share memories of the beloved 67-year-old woman who died that day. Nabeela tells me that since she’s one of the youngest in the family, she was a favorite of her grandmother’s. She got to accompany her on trips to weddings that her siblings and cousins didn’t get to attend. When I ask her if there was dancing at the weddings, she breaks out in a smile and hides in her headscarf. “She says there was dancing, but she won’t tell me if she danced,” the translator, Michelle, explains. “She’s shy.” Over the course of the interview, Nabeela uses crayons to draw several pictures of drones flying over her house. 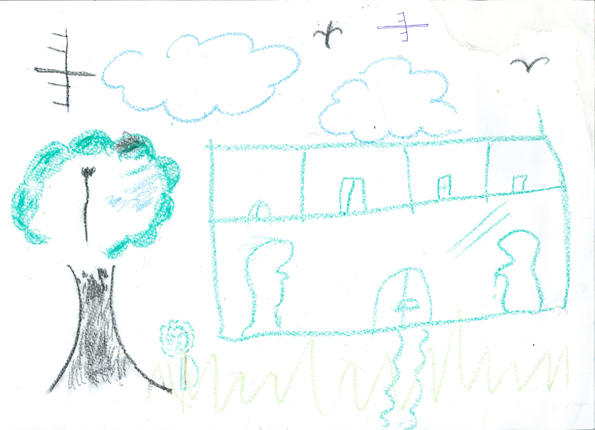 Rafiq talks about how his mother’s death has hurt the family. “My father and mother really loved each other,” he says. “If my mom was missing for more than an hour, he’d get worried, and if my dad was gone, she’d worry about him. Now I don’t see him smile anymore.”

I ask Nabeela what her favorite subject in school is, and she hesitates. “Islamia, Urdu, Pashto, ABCs . . .?” Michelle, the translator, coaxes. “ABCs,” Nabeela decides. When I ask her older brother Zubair the same question, he says “English!” with a big grin.

What would the kids say to a drone pilot if they had the chance? “The person who did [the strike], what they did was really wrong,” Zubair tells me. “We didn’t do anything wrong to them so I don’t understand why this happened to me.”

After the interview, I email Brandon Bryant to ask what message he would send to someone like Zubair, who lost a close family member in a drone strike. “I wouldn’t know where to begin,” Bryant replies. “Do I apologize? And if so, do I apologize for my actions or the actions that led to war or even the fact that humanity itself seems to be hell bent on destroying itself and that we are all victims in some shape or form? Really too complicated to answer, in all honesty.” (According to a recent GQ profile, Bryant never flew for the CIA, which runs the drone program in Pakistan.)

There is growing consensus that increased automation of weapons like drones will be possible, if not inevitable, in the future. GQ has reported that “researchers have proposed creating a Siri-like interface” – potentially a way to shift any moral blame to the machine, which some say could decrease incidences of PTSD in drone operators.

“The increased autonomy is most definitely a bad thing,” says Bryant. “The more we remove the human factor in warfare, the easier it is for those issuing the orders to excuse such actions as ‘saving our soldiers.’ And once you start making justifications for that, it makes it easier to keep doing it and even escalate. Right and wrong blur, because there ends up being less and less consequence for killing actions.”

Today, Rafiq and his family testified before a Congressional briefing held by Rep. Alan Grayson (D-Florida). Four other members of Congress also attended the briefing.  Their lawyer, Shahzad Akbar, was denied a visa by the State Department.

“Everyone here lives peacefully,” Rafiq said at the end of the briefing. “My dream is that my children in North Waziristan can live the same way.”