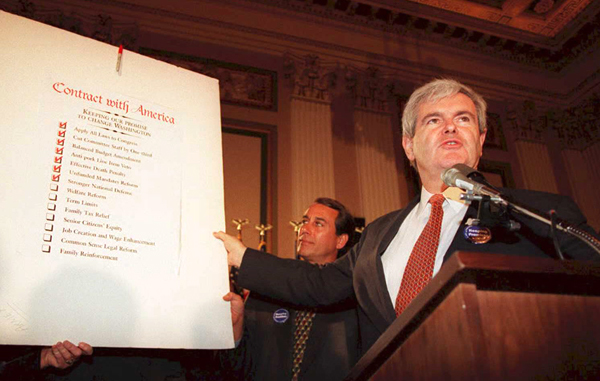 Newton Leroy Gingrich is one wily mothertrucker. He’s calling his presidential platform this year a “21st Century Contract With America.” It’s a wingnutpalooza, naturally, endorsing such “timeless American values” as seeking to “establish English as the official language of government,” and reducing the corporate tax rate to 12.5 percent and the capital gains rate to zero; and featuring such “Day One Executive Orders” as the cancellation of all “immigration-related lawsuits against states” and a renewal of “President Ronald Reagan’s policy … to stop taxpayer dollars from being used to fund or promote abortions in foreign country.” (Critics call that the “global gag rule,” because it forbids any country receiving American aid from letting doctors even talk about family planning.) The title, of course, refers to the Contract With America, which 367 Republican congressional candidates signed on the Capitol steps in September of 1994. When, two months later, the GOP took over Congress for the first time since 1952, making its architect, Newt Gingtrich, the Speaker of the House, all the world proclaimed that the electorate had just delivered a historic mandate for conservatism.

Well, not really. The Contract With America was a hustle from start to finish. It never really was about conservatism at all – practically the opposite. The fact that Newt can redeploy it to promote his right-of-Attila-the-Hun harpyish shrieking for 2012 just shows how effective the hustle – and the hustler – turned out to be.

Here’s what happened: Ross Perot. Specifically, the weirdo billionaire Texas populist won nearly nineteen percent of the popular vote in the 1992 presidential election – the most for a third-party candidate in 80 years – with an odd platform of fiscal conservatism and social liberalism,  Immediately and instinctively, both parties began bidding for his constituency. The Democrats, however, had to punt: President Clinton had made passing the North American Free Trade agreement his obsession in 1993, but opposing it was Perot’s obsession.

In stepped the Republicans. The party’s Orwellian-in-Chief, messaging guru Frank Luntz, spoke at a Republican retreat a month after Clinton’s inauguration and described the Perot vote as “the GOP’s future.” Newt Ginrich, convinced, implored every Republican candidate and official to read Lunt’z presentation. Other bigwigs demurred: Bob Dole, for instance, said Perot was nothing but a “walking sound bite,” and pointed out, “There are more new taxes in his program than in Clinton’s program.” Aye, there was the rub: Perot was no conservative. His quirky mix of policy prescriptions included huge hikes on gas and tobacco taxes and new taxes on social security and employee health insurance benefits; he was obsessed with the federal deficit, and dead serious about eliminating it. He was for less American involvement abroad, and abhorred the politicization of the kind of “social issues” around which the Republicans had organized their 1992 convention. (Their platform opened with a nearly-6,000-word section, 14 percent of the document, on “traditional family values,” and featured Pat Buchanan’s infamous speech declaring,”There is a religious war going on in this country. It is a cultural war”).

Perot, however, was pro-choice. Still, he was also a tribune of “reform” – his vehicle, remember, was called the Reform Party. That meant, in Perot’s terms, strict ethics rules for Congress and government officials; campaign finance and lobbying reforms, especially for former officeholders; cutbacks on executive and congressional staff; and – the jug-eared billionaire’s unique calling card – an insistence on term limits for politicians. And this, to cynical Republicans like Gingrich who had been indifferent if not hostile to any such notions before, was something they could work with.

An extraordinary but obscure political science monograph by Ronald Rapoport and Walter Stone, Three’s a Crowd: The Dynamics of Third Parties, Ross Perot, and Republican Resurgence, reconstructed through interviews, surveys, and documents how Gingrich devised a document micro-tailored to turn at least 70 percent of Perot voters, however fleetingly, into Republicans in time for November of 1994. “Republicans knew,” Stone and Rapoport write, “that the traditional Republican congressional campaign” – which is to say, conservatism – “would be insufficient to get this support.” This realization was the genesis of the Contract for America.

They would not call theirs a “platform”; extensive focus-grouping with Perotistas suggested they preferred something more like the “Checklist For All Candidates” that Perot included as an appendix to his book United We Stand, which Perot wanted candidates to sign as a binding contract. They would keep the word “Republican” out of it; Perot voters were all about their disgust with the two existing parties. In terms of content, their “contract” would pass over in silence the Perovian preferences no Republican could get behind (there was nothing, for example, on NAFTA or the General Agreement on Tariffs and Trade, another Perot bugaboo, nor on campaign finance reform). Traditional Republican issues that did well with Perot supporters even if they weren’t really up the ally of Perot himself (tort reform; an anti-crime package, “stronger child-pornography laws”) were present but deemphasized. The headline-producing stuff was straight Perot: “first day” pledges to audit and restructure the House and Senate, to “require all laws that apply to the rest of the country to apply equally to Congress,” to press for a balanced budget amendment to the Constitution, and a “first-ever vote on term limits to replace career politicians with citizen legislators.” (Write the political scientists: “The term citizen legislators was selected based on focus groups with Perot supporters.)

There was one extremely Republican, and not very Perovian, provision: a call for tax increases to require a three-fifths vote of congress. (Maybe they’d negotiated that one in secret with Perot himself: Gingrich and allies had been meeting with him since the spring of 1993, in defiance of the old-line House Republican leadership that Gingrich was soon to unseat. Later, Perot endorsed the Republican slate.) Finally, and most important: “Gone was the 1992 Republican platform emphasis on family values …. This decision was contentious, but Gingrich fought hard for it. He declared categorically, ‘There will be no social issues’ – a decision made with Perot voters explicitly in mind.” The final product comprised 44 percent “reform” issues, almost identical to the 41 percent in Perot United We Stand checklist (they had made up only 14 percent of the 1992 Republican platform). Then, Contract in hand, the Republican Congressional Campaign Committee got to work identifying Perot voters in districts where he had done well in 1992, blitzing them with direct mail, phone calls, and door-knocking.

It worked. As Stone and Rapoport empirically demonstrate, fans of the guy who told voters “You’re the boss and I’m Ross” lined up to vote Republican. Gingrich became Speaker of the House. Promptly, Part B of the plan, which Stone and Rapoport don’t talk about, went into effect: in 1995, retroactively pronouncing the success of the what they now called the Republican Contract With America as a straight-up electoral endorsement of conservatism – “the third leg of the conservative revolution in post-World War II America” that began with Barry Goldwater and the Heritage Foundation, which had been in on the planning all along. In 1995, Heritage staffer Jeffrey Gaynor claimed that “an extensive philosophical groundwork formed the intellectual foundation with of the Contract With America when it formally appeared in the fall of 1994.” Which is bullshit.

Meanwhile, the Christian Coalition claimed the Contract for America as a mandate for themselves. Ralph Reed, flanked Gingrich and other Congressmen who had helmed the Contract process, proclaimed: “We have finally gained what we have always sought: a place at the table, a sense of legitimacy and a voice in the conversation we call democracy.” Which was not bullshit. The Contract did earn the Christian right a place at the table, as they cynically knew it would – that was why, as Stone and Rapoport explain, “the Christian Coalition, recognizing the importance of the Perot constituency and knowing that a Republican House would be more supportive of its aims, praised an agenda that left out many of its most important issues.”

Gingrich and Co. were able to get away with it because the plain facts of what the Contract actually was (a strategic erasure of Republican conservatism) almost entirely escaped the political press – at the time, and ever since. A 1996 New York magazine article by Jacob Weisberg, for instance, about how “Ross Perot is back, in all his self-aggrandizing, wacky splendor,” observed as evidence of said wackiness, “One minute Perot is making an important point about the unwillingness of the major parties to deal with the Social Security time bomb. The next he is off on a jag about how the Contract with America was actually his idea.” (Imagine!) A 2004 history of conservatism stated baldly that the Contract “epitomized antigovernment conservatism.” The narrative was set: the Contract, and its consequence – the new Republican congressional majority – proved America was indisputably (to take the title of that 2004 history) a “right nation.” This supposed truism underwrites the defensive rhetoric of, say, Barack Obama, who felt compelled to say in his State of the Union this week, quoting Abraham Lincoln, that “government should do for people only what they cannot do better by themselves, and no more.”

Newt tells us his humungous revision of his 1994 masterpiece (Part 1: Legislative Proposals is 8,238 words so far, compared to 849 words for the entire original) is “a work in progress which will be developed over the next year and finally unveiled in a completed form” on the eighteenth anniversary of the first Contract, on September 27, 2012. But you can sign it now nonetheless, sight unseen – your own preemptive Pledge of Allegiance to the Newt. That wily, wily mothertrucker.

Rick Perlstein is the author of Before the Storm: Barry Goldwater and the Unmaking of the American Consensus and Nixonland: The Rise of a President and the Fracturing of America. He writes a weekly column for RollingStone.com.

Related
• Romney and Son: What Mitt Learned from his Dad