How the NRA Paved the Way for Mass Shootings - Rolling Stone
×

The greatest threat to our homeland security today is the National Rifle Association, a front group for the firearms industry that derails gun-safety measures and perversely profits with each new mass shooting.

Responding to Orlando — the deadliest attack by a gunman in our history — the NRA blamed the massacre on “the Obama administration’s political correctness” and not the terrorist’s access to “so-called ‘assault weapons'” — while advertising that “semi-automatics are the most popular firearms sold in America for sport-shooting, hunting and self-defense.”

Make no mistake: The NRA paved the way for the Orlando attack, during which Omar Mateen killed at least 49 people.

—The NRA’s lobbyists and political allies fought for a raft of permissive state gun laws, turning Florida in particular into the “Gunshine State.”

—The gun lobby’s gusher of campaign cash and threats of electoral retribution cowed our federal leaders into inaction on gun control, even in the face of the slaughter of first graders, an assassination attempt on a member of Congress, and the rise of home-grown terrorists.

7 Things That Are Harder to Get Than an Assault Weapon

—The NRA’s politicking has warped the Constitution itself. The late Antonin Scalia authored the 2008 Supreme Court decision that recast the Second Amendment as a guarantee of individual gun rights. Today, the NRA’s top Senate allies are blocking a Supreme Court nominee who could limit or reverse that decision.

—The combined effect? Military-derived weapons are ubiquitous, cheap and simple to obtain — even for individuals on the FBI’s terrorist watch list. The NRA’s unhinged gun advocacy has created a soft underbelly to our homeland security that radicals are exploiting to inflict mass murder.

America the vulnerable
ISIS-inspired terrorists are now exploiting our country’s unique and astonishingly easy access to military-derived weapons, where a semiautomatic AR-15 can be purchased in under 10 minutes.

In the past year, we’ve seen two mass shootings — in San Bernardino and Orlando — by self-radicalized terrorists who secured weapons for their mass slaughter with trivial effort.

These terrorists are exploiting a vulnerability identified in jihadi training materials going back over a decade.

A terrorist manual discovered in Afghanistan in the early 2000s titled “How can I train myself for Jihad” encourages would-be terrorists to obtain military-grade weapons in America: In “some states of USA,” it reads, “it is perfectly legal for members of the public to own certain types of firearms. If you live in such a country, obtain an assault rifle legally, preferably AK-47 or variations.” (The AR-15, which the NRA calls “America’s Rifle,” is the domestic cousin of the Russian AK-47.)

A 2011 Al Qaeda recruitment video included similar advice: “America is absolutely awash with easily obtainable firearms. You can go down to a gun show at the local convention center and come away with a fully automatic assault rifle, without a background check, and most likely without having to show an identification card. So what are you waiting for?”

Despite the stated intent of terrorist organizations to exploit America’s lax gun laws to wage jihad here, our NRA-cowed Congress has refused to act. Just last December, in the wake of the San Bernardino massacre, 54 senators — 53 of them Republican — voted to block a measure that would restrict gun buying by individuals on the FBI’s terror watch list.

The bill’s sponsor, California Democrat Dianne Feinstein, rebuked her colleagues. “If you need proof that Congress is a hostage to the gun lobby, look no further than today’s vote,” she said.

Mateen had been on and off the FBI watch list. It’s unclear that Feinstein’s legislation could have prevented this monster from obtaining the Sig Sauer MCX “Black Mamba” he used to carry out his massacre, but it would create a line of defense against like-minded radicals now on the FBI’s radar.

Second Amendment fundamentalism
The reason, we’re told, that people on the FBI terror watch list can’t possibly be restricted from gun ownership is because of the Constitution. Florida Sen. Marco Rubio, explaining his “no” vote last December, insisted such lists are imperfect and he wouldn’t stand for Americans “having their Second Amendment rights being impeded upon.”

But the individual right to bear arms — touted by the NRA for decades — is a newly minted right. The Supreme Court only sided with the gun lobby’s interpretation of the Second Amendment (guaranteeing individual Americans, not well-regulated militias, a right to gun ownership) in the 2008 Heller case, a precarious 5-4 decision authored by the late Justice Scalia, an arms enthusiast who would later die on a hunting trip. 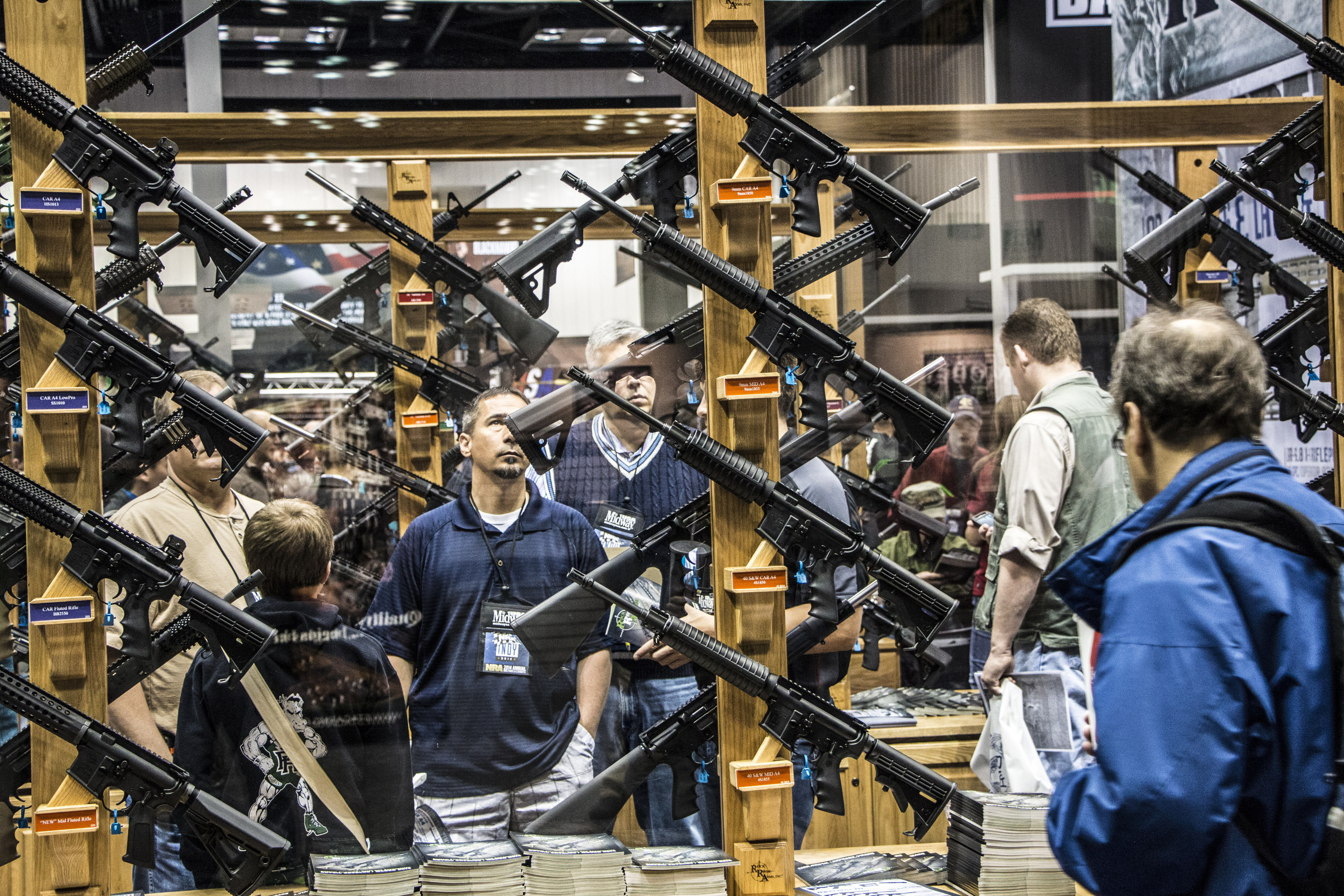 With Scalia’s death, and a vacancy on the Court, the current interpretation of the Second Amendment outlined in Heller could be reversed or — more likely — constrained. Cases at the appellate court-level are already ruling that Heller permits significant limits on gun ownership. Local bans on assault rifles and large-capacity magazines have been upheld. Just this month, the Ninth Circuit court ruled that there is no constitutional right to carry a concealed weapon.

Bought politicians
The unprecedented decision to not offer President Obama’s Supreme Court nominee, Merrick Garland, a hearing, is being driven by Republican Majority Leader Mitch McConnell, whose most recent reelection bid, in 2014, was financed by nearly $900,000 in outside spending by the NRA.

McConnell was quite explicit about whose water he was carrying in a March interview with Fox News’ Chris Wallace, insisting the GOP would block Garland even in the event that Hillary Clinton wins the presidential election. “I can’t imagine that a Republican majority in the United States Senate would want to confirm, in a lame-duck session, a nominee opposed by the National Rifle Association,” McConnell said.

The “Gunshine State”
With gun control safely stymied in the Senate, the NRA has focused its energies in the states — lobbying to make the purchase of deadly weapons easy and to encourage citizens to bring guns out of the home and into public.

Florida is known as the “Gunshine State” for a reason. The state has issued more than three million concealed-carry permits since 1987. Thanks to a collaboration between Jeb Bush and the NRA, Florida pioneered the infamous “stand your ground” law, in 2005, that emboldens people to use these hidden guns when they feel threatened. (A study out of Texas A&M found such laws “increase murder and manslaughter by a statistically significant 7 to 9 percent.”) In 2008, Florida even passed a law allowing permit holders to drive their guns to work, and leave them in their cars.

The state’s current governor is a top ally of the gun lobby, earning an A+ rating for opposing universal background checks, among other safeguards. In 2014, the NRA sent out a celebratory alert: “Governor Rick Scott Makes History Signing 5 Pro-gun Bills.” The group reportedly spent $2 million on a late push to support Scott’s reelection. In the state legislature this year, NRA-allied politicians pushed for Florida to join the ranks of states that allow open carry of guns, and to prohibit concealed carry on college campuses.

While Florida has a three-day waiting period for handguns, that restriction does not apply to assault rifles. The state also has no restrictions on large-capacity ammunition magazines. Omar Mateen was able to walk into his local gun shop and walk out with his Sig Sauer MCX the same day. Mateen used this weapon — reportedly developed for use by Special Forces, and touted by the company as equipped a with a “mil-spec” trigger — to fire off 24 rounds in one nine-second burst.

Florida’s lax gun laws are enabling rage-filled predators. The Pulse massacre was only one of two ghastly public killings in Orlando over the weekend: The Voice alum Christina Grimmie was gunned down while signing autographs after a concert Friday night.

One might imagine that this threat to public safety and homeland security would lead to a reconsideration of Florida’s permissive gun culture. But the state’s Republican leaders are not backing down.

When pressed on whether assault rifles ought to be restricted in the wake of the Orlando massacre, Gov. Scott insisted, “The Second Amendment didn’t kill people. Evil killed people.”