How the GOP Field Is Blowing It on Race - Rolling Stone
×
×

It wasn’t that long ago – a year, to be precise – that RNC Chair Reince Priebus was promising his party was serious about reaching minority voters and predicting that if they “[got] out there” and “talk[ed] to people,” the GOP would win a greater share of black, Hispanic and Asian votes.

Then Donald Trump happened. Trump has been vacuuming up support from a huge chunk of the Republican base – angry white people – with stunts like telling journalist Jorge Ramos to “go back to Univision” during a press conference.

The other candidates in the race have been faced with an impossible task: figuring out how to talk about racially charged issues in a way that appeals to Trump’s supporters while not sounding like a capital-R racist.

Needless to say, they aren’t doing a very good job. Here are some of the stickier issues that have come up lately.

The “anchor baby” debate
Like a full trash can on a hot day teeming with flies, Trump’s belligerent bigotry against Latino immigrants has attracted a swarm of conservative support. At Trump’s behest, recent news cycles have focused on the previously uncontroversial fact that people born in the U.S. get automatic citizenship. In particular, Trump’s been floating the disproved theory that women exploit birthright citizenship under the 14th Amendment by illegally crossing the border to have babies – “anchor babies,” if you’re hateful enough to use that term – so their families can stay.

Meanwhile, other candidates have been warily trying to find a way to pander to the nativist vote without committing to the bonkers idea that suddenly birthright citizenship is bad. Scott Walker initially went with repealing birthright, but then – perhaps remembering he’s supposed to be one of the sane ones – walked it back and claimed just to support cracking down on undocumented immigrants. Ben Carson got downright weird, saying he’d support drone assaults on “caves” he claims are concealing potential immigrants. But perhaps the saddest example of this phenomenon is Jeb Bush, who on a recent right-wing radio show maintained his support for the 14th Amendment, but used the term “anchor baby” anyway. Since then, no matter how many times he reminds reporters that he speaks fluent Spanish, they don’t seem to want to drop the topic of why he used a racist term to describe Hispanic-Americans.

No no no… I was talking about Asians
Bush’s attempts to save face after his “anchor baby” interview have only made things worse. When a reporter asked him this week what’s up with his use of “anchor baby,” Bush, clearly irritated, dropped this head-scratcher: “Frankly it’s more related to Asian people coming into our country, having children in that organized effort, taking advantage of a noble concept with birthright citizenship.”

You will not be surprised to learn that Asian-American groups did not appreciate his comments. But Donald Trump sure did, tweeting triumphantly, “Asians are very offended that JEB said that anchor babies applies to them as a way to be more politically correct to Hispanics (sic).”

Donald Trump: When he’s not pushing Republicans to be more racist, he’s making fun of them for being too racist. Good luck trying to win over voters who are attracted to that, Republicans. 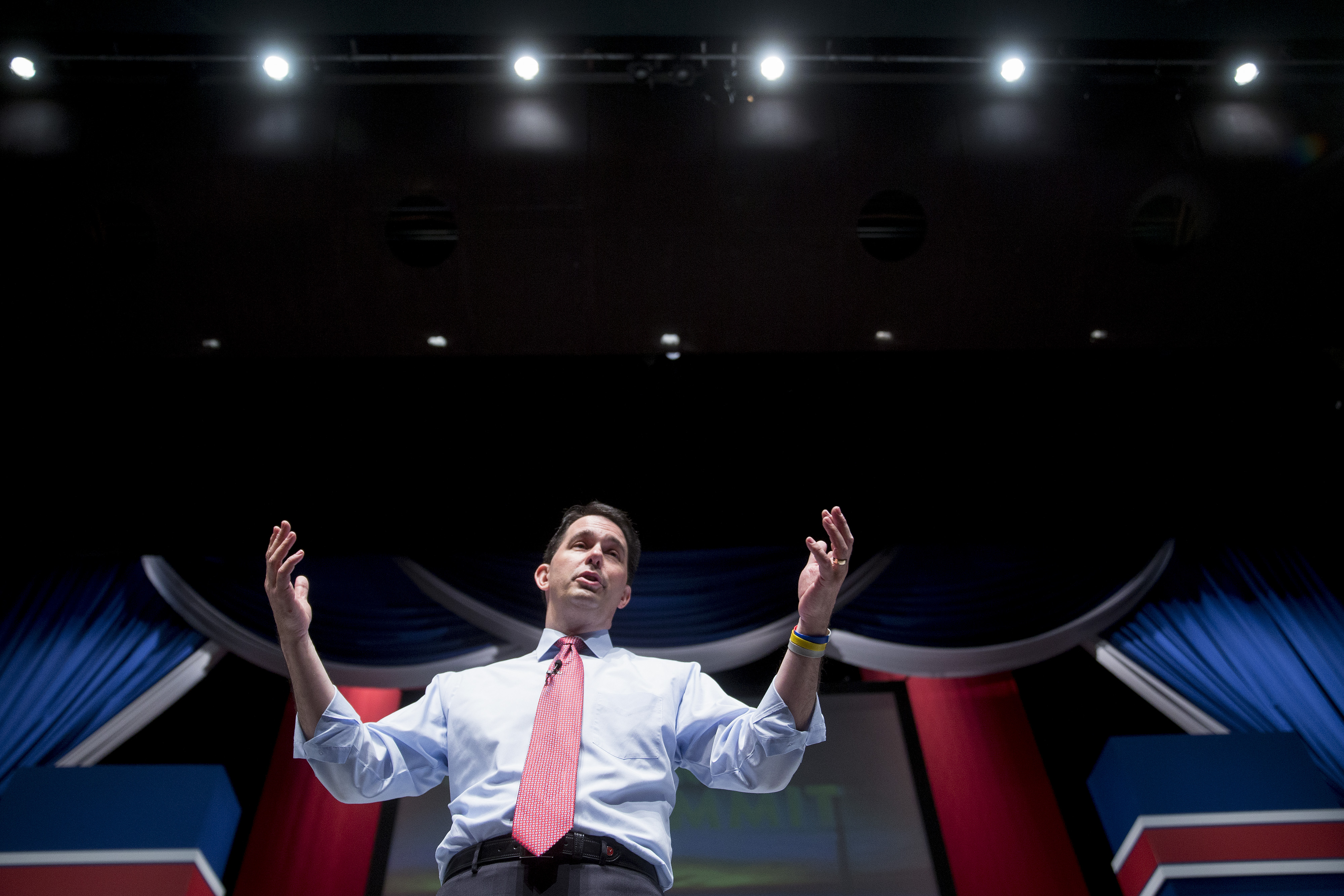 Scott Walker’s seen that writing on the wall. “Who knows who that is?” he sneered when asked if he would meet with BLM activists. “It’s the same way as saying, you’re going to meet with the Tea Party. Who is the Tea Party? There’s hundreds of thousands of people out there.” (As Steve Benen of MSNBC pointed out, Walker meets with Tea Party activists all the time, and has never once asking who they are.)

Ben Carson, for his part, has gone another route, claiming the problems BLM protesters have tried to address aren’t an issue of racism so much as hip-hop and food stamps.

A lot of the attention on Trump over the past few months has focused on the politics of personality – how his goofy bluntness attracts people who invariably cite their dislike of “political correctness” to explain why they like him. But, “politically correct” has always been meant to deride the idea that bigotry is harmful. As Matt Taibbi recently argued in Rolling Stone, “The key to his success is a titillating message that those musty old rules about being polite and ‘saying the right thing’ are for losers who lack the heart, courage and Trumpitude to just be who they are.”

And “who they are” appears to be “a bunch of mewling racists.” Unfortunately, that’s who Republican candidates need to win over in order to secure the nomination, putting us in a situation that’s bound to get even uglier.