On Friday night, President Trump sat behind bars inside a room in the Trump International Hotel in Manhattan. He was caged and handcuffed but blustery and defiant, sitting in a grease-stained pile of empty McDonald’s containers as a few rats – real, sourced from Brooklyn – nibbled on his shoes. Behind him, a message was emblazoned on the wall in bright red: “Rats will eat anything, even their rat king.”

It wasn’t the real Trump, of course, but an impressively faithful impersonator – watch out, Alec Baldwin – with a knack for put-downs (“we call ’em Demo-craps, because when I won they shit their pants”), rhyming couplets (“I fired Comey, and I told him to go home-y”) and cringe-inducing zingers (“unemployment is lower than Bill Cosby’s zipper”). The installation, titled The People’s Prison, was the latest dig at Trump from the anarchist artist collective Indecline, best known for erecting saggy, testicle-less, larger-than-life statues of the President in a city near you two years ago.

Indecline started planning The People’s Prison six months ago in the hopes of mocking Trump from inside one of his very own ostentatious properties. “The statues were popular,” Indecline’s spokesperson tells Rolling Stone, “but we felt that doing this in his house was even more of a kick in the nuts than having just put those statues up on the sidewalk. When you see the video of us shaking hands with the hotel staff, tipping them, we come in all smiles, they carry our bags for us – the involuntary collusion, it’s such a hard-hitting diss on him.”

The potty-mouthed President-in-a-cage, complete with a lurid red tie and a Make America Great Again hat, was only part of the installation – which was set up over roughly nine hours without the hotel’s knowledge – albeit the most eye-catching part. (Several visitors also said that arguing with him was cathartic.) The walls had been papered to look like drab concrete and then decorated with portraits of activists and thinkers, each painted on top of an American flag. Audio snippets from speeches or talks given by these figures played softly in the background.

The portrait gallery included famous names – Angela Davis, Noam Chomsky, Hunter S. Thompson, Malcolm X – next to a few who are less well-known, like the Navajo activist Lyla June Johnston. “I wanted to paint somebody that not many people knew,” the artist LMNOPi, who was responsible for picking Johnston, tells Rolling Stone. “She is not famous, but she’s got a real important voice.” “Enjoy the art,” Indecline’s art director added, “and also learn something.” 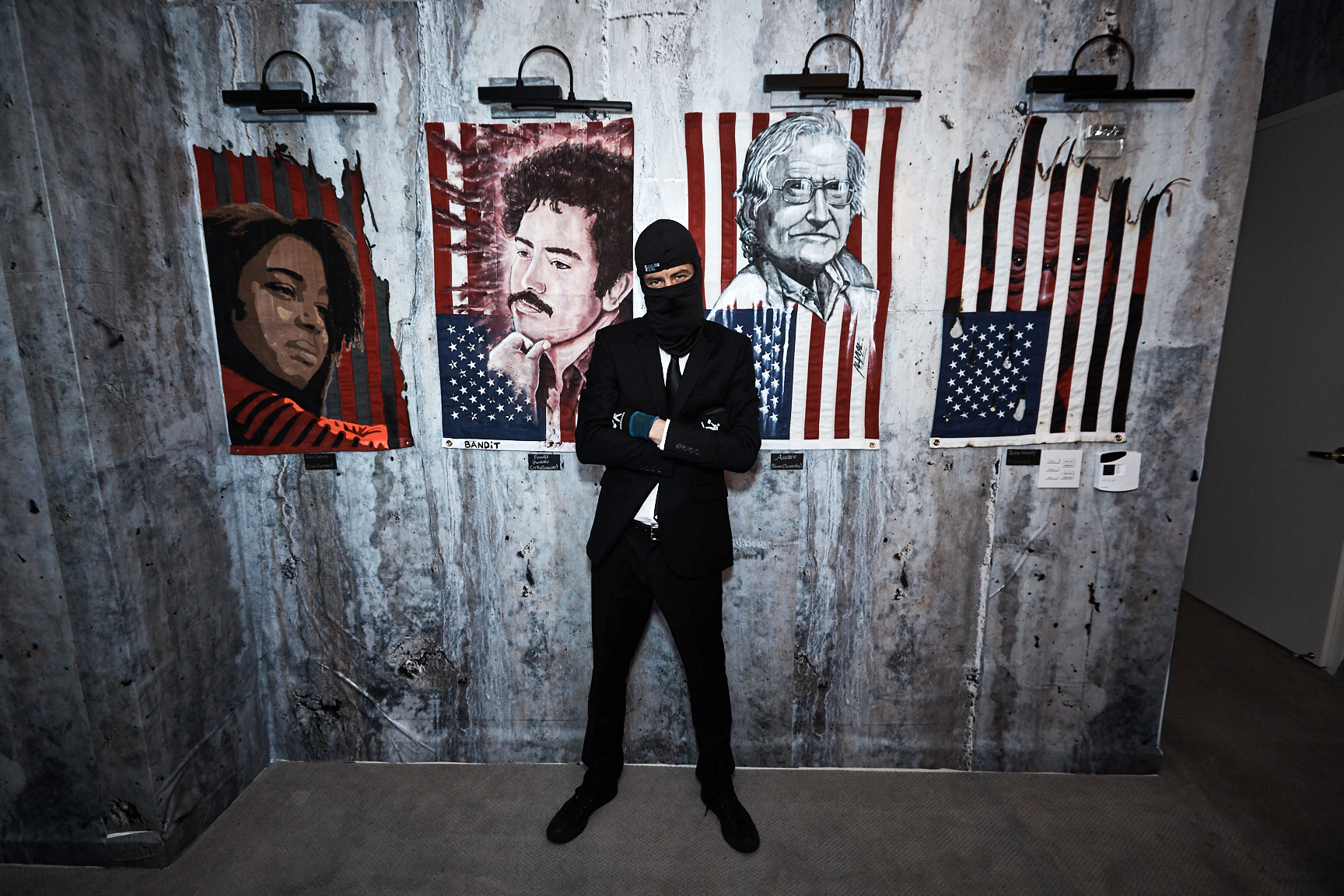 Unsurprisingly, Trump-in-a-cage was not impressed with the paintings staring down at him. “These people are total losers,” he said. “Everyone one of them was out of work, all on drugs. This is what I call the wall of shame.”

“That’s Robin Williams,” he continued, pointing to a portrait of Chomsky, “in that movie where he pretended he was a woman. You know who that is? Jim Croce. [He was pointing to a painting of Rodolfo Gonzales, a Mexican American activist]. They got Oprah in the far end there. [This painting was of Erica Garner.] You know what I call her? Oprah-the-dope-rah.”

This Trump had his own ideas for wall decoration. “They should’ve put more photos of me up, maybe some photos of Putin,” he said. “Maybe Mike Pence – he’s a bore, but they should’ve put him up there anyway. Just don’t put up Rex Tillerson. You know what I call him? No-more-checks Rex. I wanted to give [the artists] a chance to express themselves creatively, but they did a terrible job, a hack job.”

If the art bothered Trump, he seemed more happy with the cage. “I feel like I’m protected,” he explained. “I feel a real serenity coming over me; I’m in my safe place. Even when I’m in here, we’re winning anyway.”

The rats crawling at Trump’s feet reminded him of “all the people leaking in the administration,” while the handcuffs on his wrists made him think of his kinky sex life: “I’m usually used to having these on Melania, and then I can do whatever I want to her.” While behind bars, Trump had sex on the brain; he also asked LMNOPi to paint his portrait while someone was spanking him with a copy of Rolling Stone.

Indecline took down their installation overnight, returned the rats to the wild and made it out of the hotel without incident. “One of our next moves is gonna be laying low for a little bit,” the group’s spokesperson said. “We’ve been poking the bear.” But The People’s Prison will be recreated in April in Pasadena, where each of the paintings will be sold off to benefit a variety of charities.

“We want to use these faces to remind people: Now is the time to call on artists to be the next Hunter S. Thompson, to keep the legacy of these people going,” says Indecline’s spokesperson. “When you look back on Trump’s era, it’s like, what the fuck were you doing? Were you part of the solution, or part of the problem?”

The People’s Prison from Indecline on Vimeo.