President Trump has had a rough go of it since the midterms in November. The investigation into his campaign’s ties to Russia has continued to spell trouble. The Southern District of New York contended that the president directed a felony. His “charitable” foundation was forced to dissolve. His Republican base in Congress has shown signs of cracking, most notably through the near-universal condemnation of the president’s decision to defy advisers and pull American troops out of Syria. As the calendar turns to 2019, Trump lacks a permanent attorney general, defense secretary and chief of staff, and the government is operating under a partial shut down, the latest side effect of the president’s increasingly desperate obsession with building a border wall.

Trump's Tax Returns 'Must' Be Handed Over to Congress, DOJ Says 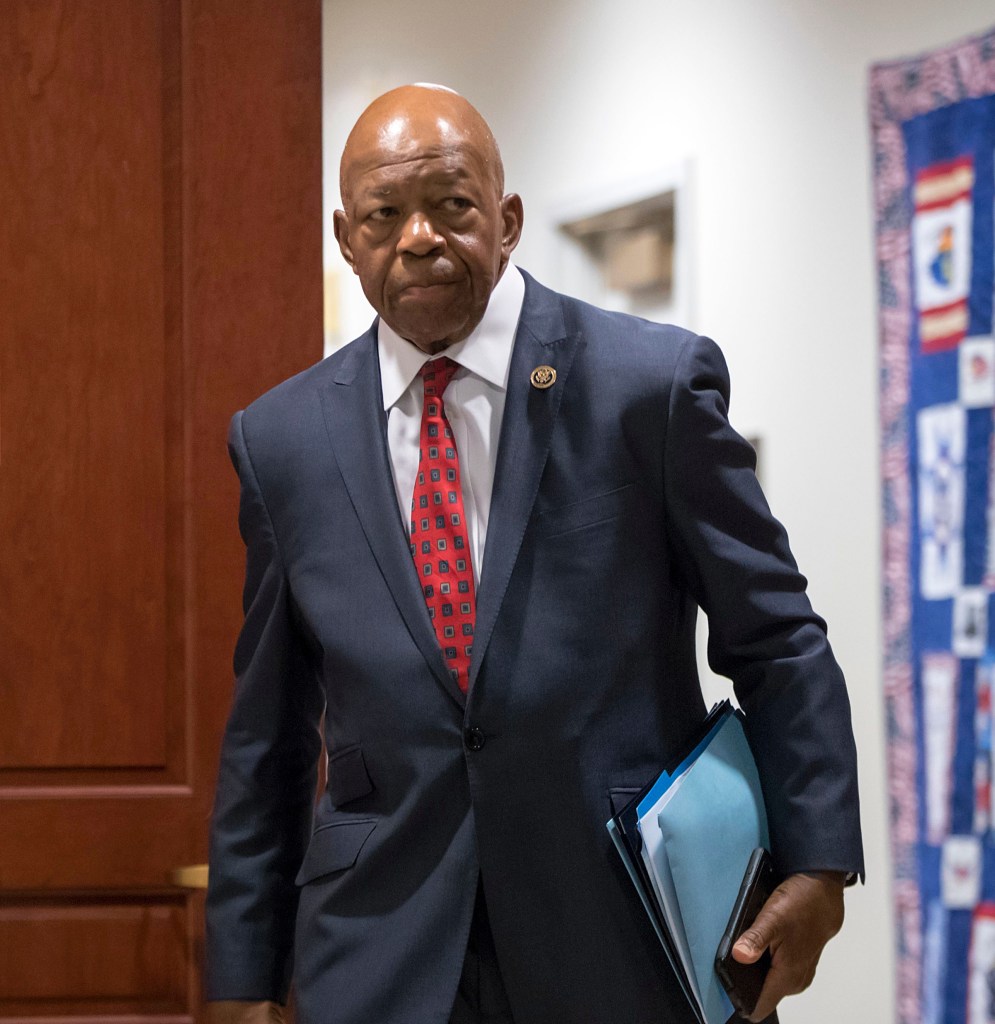 Somehow, this might only be the beginning of his troubles. Outside of giving way to what may have been the two most tumultuous months of his presidency, the elections on November 6th handed Democrats control of the House of Representatives. In addition to being able to thwart Republican legislative efforts, House Democrats will now helm several congressional committees that have the power to investigate — and, if necessary, subpoena — the Trump administration. These committees made only nominal efforts to do so under Republican control, and now that Democrats are in charge the White House should be prepared to field a flood of inquiries into how it’s chosen to run the country since Trump took office.

To demonstrate just how serious Democrats are about carrying out their duty to provide oversight to the administration, Rep. Elijah Cummings (D-MD), who will take control of the House Oversight Committee, recently sent 51 letters to administration officials requesting compliance with previously filed document requests. The letters read like a greatest hits of executive-branch corruption. Here are 10 key areas on which Cummings and other House Democrats plan to focus their efforts.

Trump didn’t release his tax returns during the campaign, he hasn’t released them since taking office, and it doesn’t look like he has any plans to release them in the future. Not voluntarily, anyway. He soon may not have a choice. Incoming House Ways & Means Committee chair Rep. Richard Neal (D-MA) has said he plans to request the returns from the White House and, if the White House does not comply, file a legal request that could result in a lengthy court battle. Rep. Bill Pascrell (D-NJ), who also serves on the Ways & Means Committee, called it “one of our top priorities.”

If Trump orders IRS not to release them, it could trigger a messy legal fight w/o precedent.@BillPascrell says “we’re not just gonna drop it.”

The president’s tax returns could contain a trove of information pertaining to everything from financial relationships with nations like Russia and Saudi Arabia, to how he may have benefited personally from the tax bill Congress passed last December. Regardless of what revelations the returns may contain, there has to be a reason Trump has been so steadfast in his refusal to release them, which up until 2016 had been standard procedure for presidential candidates.

The Constitution’s emoluments clause prohibits federal officials from receiving payments from foreign governments. Trump and his family appear to be violating this clause so blatantly — most notably through nations like Saudi Arabia booking rooms in Trump hotels — that Democratic lawmakers have already sued them over it twice. Once Democrats take control of Congress, they’ll no longer be at the mercy of the courts, and can launch their own full-scale investigation into whether Trump accepted emoluments. Rep. Cummings sent a letter to the Trump Organization earlier this month requesting records pertaining to how it handles payments from foreign governments with Trump in office.

For close to two years, Rep. Adam Schiff (D-CA), the ranking Democrat on the House Intelligence Committee, stood by as the committee’s chair, Rep. Devin Nunes (R-CA), did all he could to stymie efforts to understand the depth of the president’s relationship with Russia. Beginning in January, Schiff will be the one calling the shots, and no member of the House has been as publicly enthusiastic about using their newfound power to turn the screws on the president. Schiff has spoken about the need to discover whether Russia was laundering money through the Trump Organization, whether Trump knew about Don Jr.’s infamous Trump Tower meeting with Kremlin-connected figures, Trump’s dealings with Deutsche Bank and a host of other Russia-related issues that Nunes failed to thoroughly investigate. “We will be able to get answers the Republicans were unwilling to pursue,” Schiff told CNN prior to the midterms.

Schiff isn’t stopping with Russia. The House Intelligence Committee will also look deeply into Trump’s ties to Saudi Arabia, and how they may have affected the administration’s tepid response to the murder of journalist Jamal Khashoggi. Despite the U.S. intelligence community’s belief that Saudi Crown Prince Mohammad bin Salman ordered the murder, Trump has deferred to Salman, who has denied involvement. “Certainly we will be delving further into the murder of Khashoggi,” Schiff told the Washington Post. “We will certainly want to examine what the intelligence community knows about the murder.“

Schiff sees both Saudi Arabia and Russia as areas where Trump may have been tailoring policy to benefit his personal finances. “There’s a whole constellation of issues where that is essentially the center of gravity,” Schiff recently told the New Yorker. “Obviously, that issue is implicated in efforts to build Trump Tower in Moscow. It’s implicated in the money that Trump is bragging he was getting from the Saudis. And why shouldn’t he love the Saudis? He said he was making so much money from them.”

After Brett Kavanaugh testified before the Senate Judiciary Committee about allegations of sexual assault, Trump was pressured into allowing the FBI to investigate the Supreme Court nominee. The White House was able to control the scope of the investigation, which conveniently wrapped up in less than a week. Incoming House Judiciary Committee chairman Jerrold Nadler (D-NY) has said that he intends to uncover the extent to which the FBI was restrained in its efforts to look into Kavanaugh’s past. “One of the things the committee has to do is investigate the question of the FBI not doing a proper investigation because of White House interference so that we can do whatever’s necessary to make sure that investigations in the future are adequate,” Nadler told CNN in November.

The situation at the border has been a disaster throughout 2018, and it’s not because Democrats haven’t complied with Trump’s desire to build a wall. In April, then-Attorney General Jeff Sessions announced a “zero tolerance policy” for illegal immigrants that resulted in children being separated from parents who were taken into custody. Thousands of children were removed from the parents that brought them to the border as a result, and the Trump administration has struggled to manage what has turned into a human rights catastrophe. Administration officials haven’t been very forthright when pressed about the issue.

CICILLINE to NIELSEN: "Although you claimed publicly that you didn't know anything about a family separation policy, you signed off on a memo authorizing this practice, described as '0 tolerance.'… This is disgrace that belies our values as a country." pic.twitter.com/ty8oaccGjQ

They won’t be able to deflect questions much longer. One of the letters Rep. Cummings sent this month was addressed both to Secretary Nielsen and Health and Human Services Secretary Alex Azar. In it, Cummings requested they fulfill a prior request sent by the House Oversight Committee in July to provide records pertaining to the family separation policy, as well as the flimsy executive order Trump signed in June putting the onus on Congress to remedy the situation.

In August, the Puerto Rican government revealed that nearly 3,000 people died as a result of Hurricane Maria, which ravaged the island in the fall of 2017. Many blamed the high death toll on an inadequate response from the Trump administration, and House Democrats may use their newfound majority to find out for sure. Rep. Steny Hoyer (D-MD), a vocal critic of the administration’s response to the storm, has said Democrats will look into how FEMA handled the situation, as well as the emergency response agency’s management in general, which hasn’t been great under Director Brock Long. Rep. Cummings has also asked Secretary Azar to fulfill a request sent by the committee last October to provide records pertaining to the administration’s preparation for and response to Hurricanes Irma and Maria.

It isn’t just the administration’s immediate response to the damage that could be under scrutiny. Incoming House Natural Resources Committee chair Rep. Raúl M. Grijalva (D-AZ) has said that he will use his authority to look into whether the Financial Oversight and Management Board of Puerto Rico, whose seven members are appointed by the president, is in violation of a congressional mandate to assist Puerto Rico’s economic recovery. “The control board, with some of the proposed cuts, has aggravated the recovery and made it more difficult,” Grijalva said, according to the Washington Post. “It’s our responsibility as a committee — now as a majority — to treat the citizens of Puerto Rico as coequals.”

Improperly arranging lavish travel accommodations has been a hallmark of corruption within the Trump administration. Disgraced Environmental Protection Agency chief Scott Pruitt spent an exorbitant amount of government money on travel, and even drafted a “wish list” of desirable locations for his staff to come up with “official” reasons for him to visit. Departing Interior Secretary Ryan Zinke violated his agency’s travel policy by having his wife travel with him in official government vehicles. FEMA director Brock Long, too, misused federal vehicles, and in September was ordered to reimburse the government for using them to travel home on the weekends. Somehow, the list doesn’t end there, and Rep. Cummings is determined to uncover the extent of the travel-related corruption within the Trump administration. One of the letters he sent this month was to Secretary Azar requesting documents regarding the use of government-owned aircraft for private travel and private aircraft for government travel.

The Trump administration’s relationship with security clearances has long been a subject of scrutiny. Because the White House can’t simply hand out high-level security clearances without the FBI first vetting their recipients, the administration has opted to go ahead and give several questionable officials access to sensitive material that normally would require a clearance. Jared Kushner is one such example. Another is Rob Porter, the staff secretary who resigned in February in the wake of allegations that he physically abused his two ex wives. House Democrats plan to look into how the White House handles security clearances, as well as how they chose to revoke clearances from several former intelligence officials who spoke ill of the president. Rep. Cummings has sent a letter to departing chief of staff John Kelly requesting the necessary records.

When Trump forced out Jeff Sessions as attorney general following the midterms, he tapped Sessions’ chief of staff, Matthew Whitaker, to run the Justice Department on an interim basis. Whitaker was woefully underqualified for the position, and it has since been reported that he allegedly has a history of fraud, from serving on the advisory board of a company that scammed clients to lying on his resume about being an academic all-American at the University of Iowa. Most notably, Whitaker had publicly bashed the Mueller investigation, which is almost certainly the reason Trump chose him to oversee it until a permanent attorney general can be confirmed. Cummings, Nadler, Schiff and Rep. Frank Pallone (D-NJ) announced last month that they plan to investigate Whitaker, writing that “serious questions are now arising about his fitness to serve in this position of trust.”