A new attack ad put out by the Hillary Clinton campaign this week achieves the near-impossible, making Donald Trump look wronged and (almost) like a victim. More believably, it makes the Democrats look sleazy and disingenuous in comparison.

The ad begins with a picture of a grinning Trump and the words, “In 2006, Donald Trump was hoping for a real estate crash.”

It proceeds to a series of grim scenes from the financial crisis. Against a Roger and Me-esque montage of blighted neighborhoods, it reads off stats: “9 million Americans lost their jobs. 5 million people lost their homes.”

Then it returns to a grinning Trump, and another line:

“And the man who could be our next president…

was rooting for it to happen.”

Then we hear Trump talking about how a bursting of the real-estate bubble would be an opportunity for rich folks like himself.

“I sort of hope that happens, because then people like me would go in and buy,” Trump says, in an interview from 2006. “If there is a bubble burst, as they call it, you know, you could make a lot of money.”

This ad is disingenuous in a dozen different ways. For one thing, the destruction that the Clinton campaign describes was not caused by people swooping in after the bubble burst, buying at the bottom of the market.

It was caused by the existence of a speculative bubble in the first place. And that bubble was inflated not by Donald Trump, but by the people who have at least in part bankrolled Hillary Clinton’s career: namely, Wall Street banks.

In the mid-2000s, a speculative mania swallowed up the real-estate markets largely because Wall Street discovered a new (and often criminally fraudulent) way to peddle mortgage securities.

The basic trick involved big banks buying up the risky home loans of subprime borrowers — the loans of people who often lacked verified incomes and had poor credit histories — and repackaging them as highly rated mortgage securities.

Basically they took risky loans and presented them as somewhat safer investments to a range of investors, all of whom later got clobbered: pension funds, hedge funds, unions, even Fannie Mae and Freddie Mac.

This technique, of turning rancid home loans into a kind of financial hamburger and then selling it off as grade-A beef to institutional investors, created artificial demand in the real-estate markets, which in turn led to the speculative mania.

The bubble stayed inflated for a few years because a continual influx of new investors kept the old investors from losing their shirts for a while. The layman’s term for this is a Ponzi scheme.

So when Donald Trump in 2006 says, “If there is a bubble burst, you could make a lot of money,” he might sound crass, but he wasn’t wrong. That bubble was always going to burst. Those investors who got creamed were always going to get creamed.

And the fault was with the people who drove this speculative craze by knowingly peddling bad merchandise and continually driving the markets upward. Think, for example, of Citigroup, which was selling huge masses of mortgage securities even as its traders were saying things to each other like, “We should start praying… I would not be surprised if half of these loans went down.”

We know the names of many of these companies because many of them have agreed to pay huge settlements for their involvement in selling mismarked mortgage securities.

Four of them — the aforementioned Citigroup, along with Goldman Sachs, Morgan Stanley, and JP Morgan Chase — are among Hillary Clinton’s top six contributors for her career.

The new Clinton ad references people in foreclosure — it even shows a big, scary foreclosure sign. Many of the same banks also agreed to massive settlements for, among other things, using fraudulent documents to kick people out of their houses. Major Clinton donors Citigroup and JP Morgan Chase were signatories to the original $25 billion foreclosure settlement, for instance.

As for the whole issue of “rooting” for a crash so as to make money off the misery of others, what Donald Trump was talking about — and it’s galling to the point of being physically painful to have to defend him here — may sound scummy, but was neither illegal nor even unethical, unless you want to call this kind of capitalism unethical (which some might).

Trump wasn’t rooting for an avoidable disaster, like a 9/11. With this bubble, the disaster had already happened. The properties were already overvalued. Trump or not, that pain was coming.

Taking advantage of market inefficiencies is what investors are supposed to do, a la the traders in The Big Short who spotted the corruption in the real-estate markets early and bet accordingly. Personally I doubt Trump was smart enough to bet so much as a penny out of his alleged billions on the market collapsing, but if he did, it wouldn’t have been unethical, just cold.

The same can’t be said for Goldman Sachs, the company famous for paying Hillary Clinton $675,000 for three speeches.

In the spring of 2011, the Senate Permanent Subcommittee on Investigations, led by Michigan’s Carl Levin, released a giant report about the way Goldman profited from the crash by shorting the market even as it was advising clients in the opposite direction.

This report detailed how in 2006, the same year that Donald Trump was talking out loud about the bubble bursting, Goldman found itself stuck with what amounted to a $6 billion bet on the housing market.

But at the end of the year the firm analyzed its position, saw the coming trouble, and realized it needed a change in strategy. Goldman’s leaders, including CEO Lloyd Blankfein (seen here warmly embracing Hillary Clinton) and CFO David Viniar, decided that they needed to unload as many of their mortgage holdings as possible. 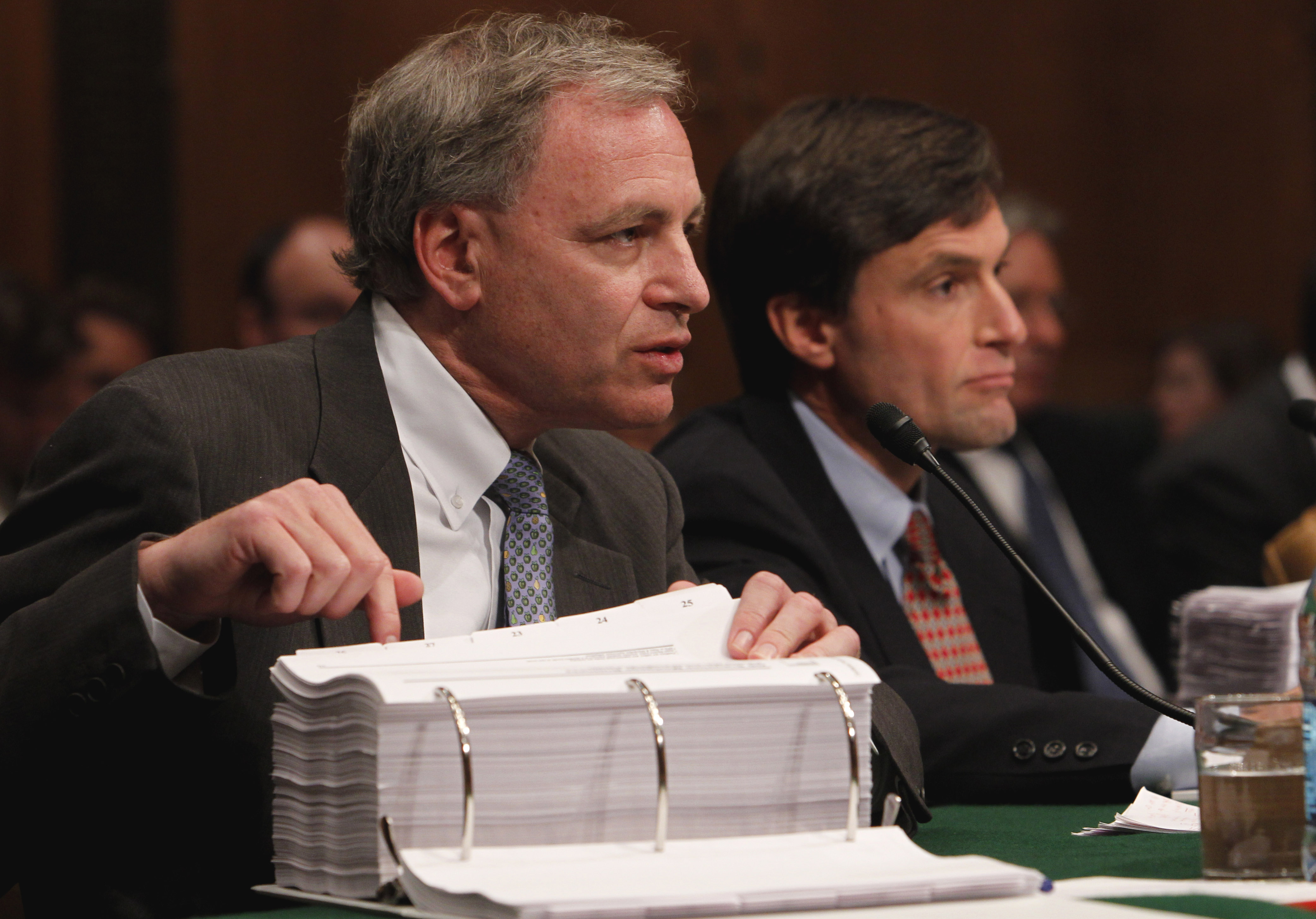 One particular quote the Senate investigators dug up stands out. In late December of 2006, Viniar wrote an email to his chief mortgage officer (emphasis mine):

“Let’s be aggressive distributing things,” he said, “because there will be very good opportunities as the markets [go] into what is likely to be even greater distress, and we want to be in a position to take advantage of them.”

This, coming from the chief financial officer of a firm that has been among Hillary Clinton’s top donors, is exactly what Donald Trump said.

Two months after that Viniar memo, in February of 2007, Blankfein wrote an email of his own.

“Could/should we have cleaned up these books before,” Blankfein wrote, “and are we doing enough right now to sell off cats and dogs in other books throughout the division?”

By “cats and dogs,” Blankfein meant the toxic mortgage holdings he wanted off his company’s books. How did they get rid of them? They sold them off to customers.

In one particular deal, called Hudson, Goldman unloaded $1.2 billion worth of “cats and dogs.” They neglected to tell the client that these came from their own inventory, saying instead that the holdings were “sourced from the street.”

By the spring of 2007, Goldman executives were in a panic about the likely meltdown of the real-estate markets. In May, a senior exec gave a presentation saying, “There is real meltdown potential.”

The execs scanned the earth for suckers willing to buy up their doomed products. They found a hedge fund in Australia willing to buy a $100 million mortgage-based deal called Timberwolf, promising returns as high as 60 percent while privately laughing about finding the ultimate sucker.

“I found a white elephant, flying pig and unicorn all at once,” clucked one of the bank’s sales reps. A few days later, after the deal was off their books, another Goldman exec famously trumpeted, “Boy, that Timberwolf was one shitty deal.”

I spent most of the last eight years poring through disgusting stories like this, reporting on the dreary question of what caused the 2008 crash. All of that work was done before Hillary Clinton announced she would run for president. This isn’t about Hillary Clinton for me. It’s about the continuing influence of these companies.

These firms have mostly avoided blame for the crisis, partly because this subject is complicated, but also because mainstream politicians from both parties have refused to point a finger at them. For that, Hillary Clinton probably is at fault now, contributing to a failure among major-party politicians to be straight with the public that dates back to the first days of the crisis.

It’s bad strategy. Trump is a lunatic, but he’s gaining strength because his supporters believe his story about being so rich that he’s free to tell it like it is. They equally believe his windy diatribes about Beltway pols like Jeb Bush and Hillary being compromised by the great gobs of money they take from corporate donors.

By blaming Trump for a problem caused by their own political patrons, Hillary and the Democrats are walking face-first into Trump’s rhetorical buzz-saw. Couldn’t they find something else to hit him with?

Find out everything you need to know about the presumptive GOP nominee Donald Trump, in his own words.