This story was published in partnership with The Trace, a nonprofit newsroom covering gun violence. Subscribe to its newsletter

The mass shootings in Buffalo, New York, and Uvalde, Texas, have provided the latest and most extreme examples of a breathtaking epidemic of gun violence in the United States. More than 45,000 people died by gunfire in the first year of the pandemic, according to the Centers for Disease Control and Prevention — an accretion of hundreds of smaller mass shootings, deadly neighborhood disputes, and firearm suicides that pushed the death toll to an all time high. Estimates suggest the bloodshed only worsened in 2021, and show that firearm violence remains elevated heading into this summer.

Amid this unfolding tragedy, gun and ammunition sales have skyrocketed, scoring record-breaking profits for the companies that manufacture them. Securities and Exchange Commission filings show that, since the pandemic began, publicly traded gun companies have netted somewhere in the ballpark of three billion dollars, far outpacing previous years’ earnings.

Jade Moldae, an editor at the trade publication Shooting Industry Magazine, seemed to acknowledge the irony of this success in a December 2021 editorial. “There are many words we could use to describe the past two years,” he wrote. “[U]nprecedented, relentless, eye-opening, stretching, tumultuous, frustrating, to name a few. But here, let’s focus on another: opportunity.”

Over the past fifteen years, gun sales have followed the nation’s election cycle, spiking when Democratic elections aggravate fears of gun control, and dipping when Republicans come into power. Gun sales ballooned in the aftermath of the Sandy Hook school shooting, when President Barack Obama pledged to enact stricter gun reforms. Though few of his promises were realized, the industry enjoyed unprecedented prosperity for the remainder of his presidency. In 2016, in anticipation of a Hillary Clinton victory, sales lurched again, setting new all-time records for background checks in the Federal Bureau of Investigation’s system. (Donald Trump’s election so badly shocked the market that it sent several oversupplied gun companies into bankruptcy).

The pandemic sales surge has dwarfed these previous spikes. At Sturm, Ruger, & Co., gross profits nearly doubled between 2019 and 2021 to almost $280 million — its highest total ever. The chemical and ammunition manufacturing company Olin Corp likewise experienced unprecedented highs, recording more than two billion dollars in ammunition profits over the same period. Smith & Wesson, the most prolific American gun manufacturer, raked in more than half a billion dollars since the pandemic began. 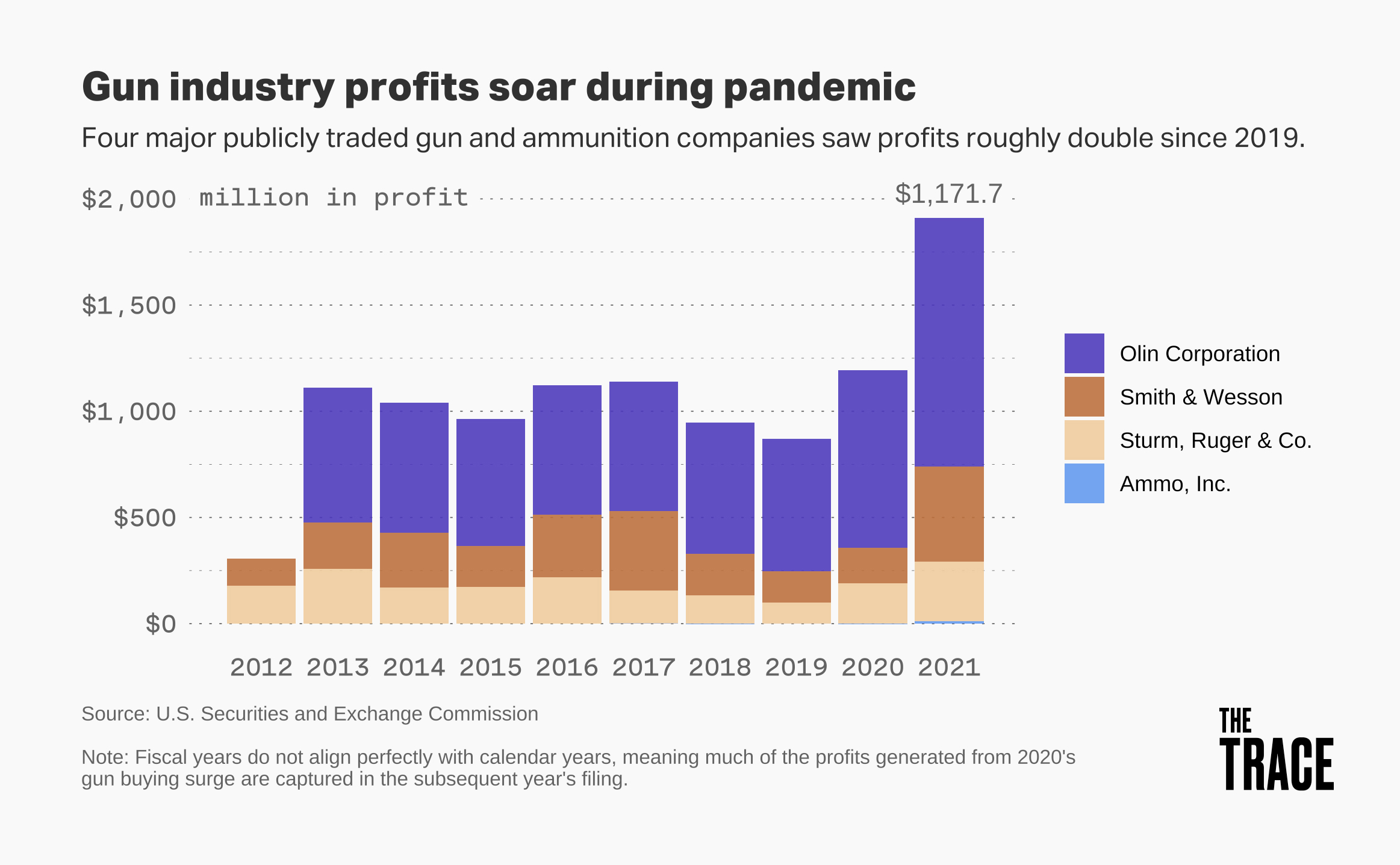 In October of 2020, after notching $100 million in sales in a single month, the company gave employees commemorative silver and blue coins etched with the reminder, “FIRST 100 MILLION DOLLAR MONTH.”

Growth in profits at the publicly traded gun companies even outpaced the record growth in sales, indicating that gunmakers were able to keep costs down while scrambling to meet unprecedented demand. “In a year of turmoil, we gained market share,” Smith & Wesson executives wrote in an investor presentation from last June, alongside graphs showing company sales outstripping nationwide increases in background checks. “We’re just getting started.”

Matthew Lang, an economist at the University of California, Riverside, co-published a paper examining the drivers of this sales spree and comparing it to previous surges. He said in an interview that the past years’ sales boom broke with more recent tradition in that it crossed party lines. He compared it to a smaller spike in gun buying that followed the September 11 attack on the World Trade Center. “Everybody shared this general uncertainty about a lot of things, and specifically about whether they’re going to be protected by traditional institutions,” he said. “So unlike spikes in firearm purchasing that tend to occur during election years, you see this surge in gun buying of similar magnitude happening regardless of the political leanings of each state.” In fact, several states led by Democrats — Michigan and Rhode Island, for example — saw month-over-month increases that outpaced gun rights strongholds like Texas.

The National Shooting Sports Foundation, the trade organization that represents the gun industry, has attributed the more even distribution of the sales boom to a dramatic increase in first-time gun buyers, many of them from groups traditionally underrepresented among American firearm owners. But limited research refutes much of the organization’s claim. While the past two years have seen more first-time gun buyers than ever before — including more women and people of color — all types of gun buyers appear to have increased in tandem.

The National Shooting Sports Foundation did not respond to requests for comment.

Donavan Lambert, a freelance filmmaker from Mount Vernon, New York, decided to buy his first gun at the height of the pandemic, just weeks after George Floyd was murdered by Minneapolis police officer Derek Chauvin. He said multiple friends encouraged Lambert, who is Black,  to arm himself because of the emboldening of white supremacists during Donald Trump’s presidency. Floyd’s killing pushed him over the edge. He went online and placed a bid for a Mossberg Maverick 88 12-gauge shotgun on the internet marketplace GunBroker.com, and picked his gun up a week later from R&T Smoke N Gun Shop on his neighborhood’s west side. “When you have cops just laying on somebody’s neck like that and not doing anything about it,” Lambert said, “you just feel like you gotta level the playing field somehow.”

Lambert said he bought his gun online because no store in his vicinity had available stock. As The Trace has reported, 2020’s run on gun stores rapidly depleted inventories, plunging many smaller shops into a frustrating holding pattern: Unable to wrangle enough firearms to capitalize on surging demand, businesses went weeks without moving product. Because of this, they missed opportunities to share in gun manufacturers’ historic gains. Richard Talbert, a manager at ProShots, a gun shop and range in Rural Hall, North Carolina, said the sudden spike in demand also forced wholesale prices to new heights. Even though he sold slightly more guns than usual, his profit margins were slim and the shop fared no better than in an average, crisis-free year.

When asked whether the past years’ spike in gun crime had weighed on him during this period, Talbert said it was one of the most difficult parts of his job. “It’s a huge responsibility of our business to prevent guns from ending up in the wrong hands,” he said. “It’s a matter of discussion for us constantly.” In the aftermath of May’s Buffalo shooting, in which a racist gunman opened fire on grocery shoppers, killing ten, Talbert and his colleagues dedicated several morning meetings to reviewing compliance protocols and discussing the sale that enabled the shooting. (The Buffalo shooter had told teachers he wanted to commit a murder/suicide in 2021, but neither his teachers, his parents, nor law enforcement sought to confiscate the boy’s firearms under New York State’s red flag law).

Gun manufacturers have, historically, rarely weighed in on whether they have a responsibility to help reduce gun crime. But that crime is nevertheless a core part of the industry’s marketing strategy, says David Yamane, a sociologist at Wake Forest University who studies firearms marketing. Yamane said that much of the gun industry’s advertising over the last two decades has focused on the need to defend oneself from violent crime. Magazine ads from Kel-Tec pitch rifles “bred for self defense.” On Facebook and YouTube, a man holsters his Taurus pistol underneath a green flannel shirt, telling the audience in a low baritone, “I carry because I care enough to protect the ones I love.”

Meanwhile, research shows that sudden increases in firearm availability correlate with increases in shootings and homicides. Indeed, recent data from the Bureau of Alcohol Tobacco, Firearms and Explosives suggests guns bought in 2020 were more likely to be used in crimes within a year of their purchase than guns purchased in any other year.

Yamane acknowledged this reality could create something of a “self-fulfilling prophecy,” if the industry uses the threat of violent crime to sell guns, and those newly sold guns then increase the incidence of violent crime. But he cautioned against the simplicity of this explanation. Advertising, he said, might motivate you to buy a specific brand once you’ve already decided to buy a good, but that decision is often made before exposure to the advertisement” — especially for new gun owners.

David Chipman, a former ATF agent whom President Biden nominated to helm the agency in April of 2021, was less generous in his assessment of the industry’s role. “At the end of the day, crime is another business opportunity for the gun companies,” he said. He questioned why the gunmakers have worked so actively over the years to thwart a robust debate about the causes of gun violence and what measures can be taken to prevent it: “It’s because when those crime guns are recovered, they need to be replaced, and that’s good for business.” Biden withdrew Chipman’s nomination after a barrage of criticism from Senate Republicans about Chipman’s affiliation with the prominent gun violence prevention group, Giffords, where he worked as a senior policy advisor.

In the early 2000s, the industry successfully lobbied to conceal data on the origins of recovered firearms from the public, to immunize gun companies from most product liability suits, and to limit the research that can be conducted into gun violence. Around the same time, the NSSF registered to trademark a new slogan for its seal. No longer would it read, “Promote. Protect. Preserve.” It now says, “Always Shooting for More.”