In his bid for state Attorney General, George P. Bush puts “Defend Our Law Enforcement” at the heart of his “pro-Texas agenda.” It’s a law-and-order message that has earned him prominent endorsements, including from the National Border Patrol Council.

Bush’s endorsement page also recently included a plug from a top north Texas lawman who insisted Texas “needs a clear leader who backs the blue.” But that official, Sheriff Jeffrey C. Lyde of Clay County, has become notorious in recent days — and his plug has been scrubbed from Bush’s website.

Early last week, Rolling Stone highlighted Lyde’s appearance in hacked membership rolls of the far-right Oath Keeper militia. Then, on Thursday, Lyde was arrested and detained at his own jail, on charges of “official oppression,” for allegedly illegally detaining two inmates.

Lyde’s endorsement has since disappeared from Bush’s website. Rolling Stone took the screenshot below Thursday afternoon. By Thursday evening there was no trace of Lyde’s kind words for P.: 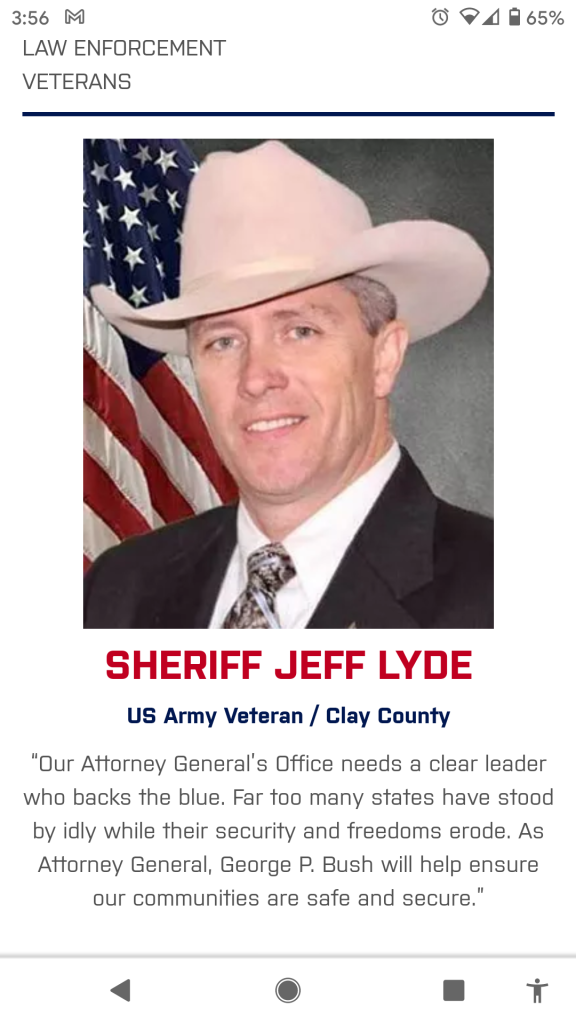 Bush’s campaign did not reply to queries about what happened to the endorsement from Lyde, its views on his indictments, or whether the campaign is standing by Lyde as he defends himself against the charges he abused his powers.

The scrubbed endorsement underscores the tricky spot Bush is in, politically, as he campaigns to be Texas’ top cop. The GOP scion — the grandson and nephew of presidents, and son of a governor — belongs to one of the most storied political dynasties in America. His middle initial, P., stands for Prescott, the first name of his great grandfather, who represented Connecticut in the U.S. Senate.

But in this Trumpy age, being the next-gen Bush is at best a mixed blessing. P. has attempted to straddle the gap between his establishment inheritance and the party’s anti-establishment leader. Despite his father, Jeb Bush, having been raked over the coals by Trump during the 2016 GOP presidential primary, P. has cozied up to the 45th president. In his current post as Texas Land Commissioner, P. appeared with Trump at a 2019 signing ceremony to expand oil pipelines. “This is the only Bush that likes me!” Trump crowed as he called P. to the stage for a handshake. “This is the Bush that got it right.” P. publicly backed Trump in the 2020 election.

Bush is now campaigning to oust the state’s incumbent attorney general, Ken Paxton, who has proved a magnet for scandal. A Tea Party conservative, Paxton has been indicted for felony securities fraud. (Originally filed in 2015, those charges are still pending, having been stalled for years by court challenges.) More recently, Paxton has been accused by senior staff of misusing his office to benefit a top donor, leading to a reported FBI probe of Paxton. (The AG’s office issued a 374-page report that purports to clear its leader.) Bush told the Dallas Morning News that if Paxton wins the GOP primary, he would fall in the general election to a Democrat. “This time around he will not win,” Bush said, “because he’s facing corruption and bribery charges.”

Attempting to differentiate himself from the incumbent, Bush has made transparency and good governance cornerstones of his campaign. He’s insisted Texas needs an attorney general who is “above reproach.” But former President Trump has not been swayed to back his one Bush buddy. In July, Trump endorsed Paxton “to advance America First policies,” billing him as “a true Texan who will keep Texas safe—and will never let you down!”

Ultimately — as the disappearance of Lyde from his backer’s list underscores — George Prescott Bush’s establishment DNA is winning out. It’s one thing to accept an endorsement from a right-wing, meme-slinging, Trump-loving sheriff who posts “LETS GO BRANDON!” on Facebook. (Lyde’s Twitter backdrop features a child telling his mother: “When I become a man I want to be a liberal,” to which the mom replies: “Well you’ll have to decide. You can’t be both.”) It’s quite another to stand by that lawman as he’s linked to a militia group and arrested for a pair of Class A misdemeanors for subjecting detainees to jail terms “that the defendant knew was unlawful,” according to the Lyde indictments.

P. may play footsie with the Trump wing of his party. But he’s ultimately a Bush at his core, as the appearance of another endorser on his page underscores: “George P. Bush is a man of great integrity who has dedicated his life to public service based upon the conservative principles that I support,” writes James A. Baker III, who served as H.W.’s chief of staff and as an all-purpose family fixer through the W. years.

“I support my good friend George P. Bush,” Baker writes, “and I hope that all Texans will support him.”