I awoke this morning only to hear Newt Gingrich promise that if he gets elected president, gas prices will fall to $2.50 a gallon.  My first thought, other than “this may not be a very good day” was: why $2.50?  I mean, why not $2?  That, after all, was where Michelle Bachmann set the price of a gallon if she were the Pres. Actually, as long as they’re making promises, the candidates might want to consider less round numbers, like $2.27 a gallon … sounds a lot more scientific.

BTW, just to amplify the circus aspect of all this, note that former candidate Herman Cain has dubbed the Gingrich gas “plan” the new ‘9-9-9.’  Or as he calls it, Newt’s “Two-Five-Zero idea.”  I am not making this up.

Ok, politicians pander … not exactly a news flash.  But there’s so much wrong with the gas discussion that it warrants a little bit of analysis.

• Gingrich blames the president for high gas prices. His plan, such as it is, calls for more domestic drilling and fracking.  What you don’t learn from his exposition on all this is that the Obama administration has already way cranked up domestic production of fossil fuels.

• Last year, America produced the most crude oil in eight years, over 100,000 barrels per day above 2010 levels.  It’s one reason our oil imports as a share of total oil consumed have steadily fallen over this period, from 57% in 2008 to 45% last year. In fact, 2011 was the first year in my lifetime (and I’m old) that we exported more refined petroleum products – gas, heating oil, jet fuel – than we imported.

• Domestic natural gas production is also way up; last year’s increase in the volume of this stuff coming out of the ground was the largest on record.

I am not saying these are wonderful achievements.  There are strong environmental concerns regarding fracking, for example.  But I am unequivocally saying that lack of commitment to domestic production is not a) a criticism that applies to the current president, or b) why gas prices are high right now.

But before we get into any actual “why’s” here, let’s all take a breath and check back with reality for a moment.  The United States holds only a couple of percent of known global oil reserves, and we produce less than 10% of total crude.  These are binding constraints that no president can change.  I’m not suggesting that our domestic production has no effect on prices.  But oil is a global commodity and most of it is under the land of other countries.  Our contribution to supply will always be a drop in the bucket and will thus generally be a matter of cents on the gallon, not dollars.

Gas prices are high right now because Mideast tension adds a price premium to oil markets.  Some of this is speculation, but that’s neither surprising nor necessarily wrong; people buying futures contracts on oil will always bid up the price like this on supply jitters (e.g. the fear that Iran might block the Strait of Hormuz, through which 20 percent of the world’s oil passes).  There are also a few more refineries than usual offline right now, as they retool to more efficiently process high-sulfur crude.  And as the current recovery takes hold, domestic increases in demand are also likely driving up prices a bit.  (Important note here: the fact that China is now growing more slowly may serve as a pressure valve on oil prices; fast-growing energy consumption by China and India have been a significant contributor to price spikes in recent years.)

So, is there anything we could do about high gas prices in the short run?

Well, first, no, there isn’t.  I mean, we do keep an emergency supply of oil that the president can tap—the Strategic Petroleum Reserve—but that’s for real emergencies, not political ones.

But second, there are good reasons to actually heed, as opposed to jam, this price signal.  Oil is a fixed, non-renewable, heavily-in-demand input into global production, and for all those reasons, you’d expect its price to rise.  The way economies are supposed to work is that price increases like this signal us to respond by conserving the resource in question while developing alternatives.  And, in fact, as I show here, we are using energy more efficiently than we used to.

On the other hand, just because you’re listening to a price signal doesn’t mean you’re OK with it.  This spike in prices hurts on both a micro and macro level.  At a micro level, the figure below shows gasoline expenditures as a share of after-tax income for families in different income groups.  Filling tanks accounts for 10% of the spending of low-income families, but just 2% for those at the high end.  And it’s the middle and low-income folks that are already squeezed by the plodding recovery, weak job market, and falling real paychecks.  This doesn’t help.

Macro-wise, analysts worry that oil and gas price increases so far could, if sustained, shave as much as half-a-point of off GDP growth over the year.  That’s not going to tip us back into recession, but it makes it that much harder to keep up the momentum we’ve seen lately bringing down the unemployment rate.

As sure as the night follows the day, pols will pander on the price of gas.  What’s different in this round is just how deeply wrong most of them are on domestic production.  Our best move is to block them out and listen to what the price signals are telling us.  And if you happen to run into someone trying to sell you on “Two-Five-Zero,” you might kindly suggest that they get to work on stuff they actually could do something about, like … oh, I don’t know … fixing the nation’s infrastructure, helping strapped states, investing in clean energy, training the unemployed… 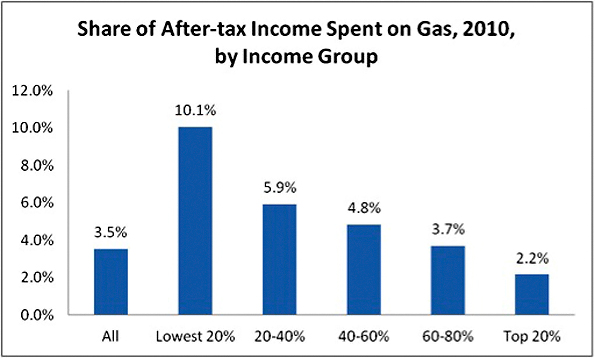 Also by Jared Bernstein
• The Economy: What’s Wrong and How to Fix It
• How to Build a Fairer Economy
• What Obama’s State of the Union Got Right
• Jobs Report: Good News, but a Long Way to Go
• It’s (Almost) Time to Raise the Minimum Wage
• Reasons to Like Obama’s Budget
• Why Manufacturing Matters
• Obama’s Corporate Tax Plan Calls GOP Bluff