Fox News Debate Targets Donald Trump, But Can They Stop Him? - Rolling Stone
×
×

If Donald Trump represents something like the dark heart of the Republican Party, what we saw during the first official Republican Party debate on Thursday night was the machine trying to control itself. For a party that has gutted and isolated its own structure through its own policy victories, the debate offered everyone an example of the last remaining organ of authority flexing itself. Fox News had celebrated the Donald until this point, but last night it decided to show what it is like when its patience is, if not at an end, then at least temporarily, peevishly suspended.

Godspeed to Jon Stewart, but you don’t need him repackaging last night’s events to understand how this process works. You probably remember enough examples already of when Fox News decides to go all-in on a preferred narrative – blaming Trayvon Martin’s shooting on his hoodie, inventing the War on Christmas, questioning Obama’s Americanness – there are hundreds. But just watching the first of two debates last night would work in a pinch.

In the early, JV debate, Carly Fiorina acquitted herself well. What she has to say is no more meaningful than what Bobby Jindal has, for example, and like Jindal and everyone else on that stage, she leaned heavily on her stump speech, reiterating conservative buzzword Mad-Libs in a personalized order that any political wonk is already exhausted to hear. She rang the Benghazi! Benghazi! Benghazi! bell repeatedly, then closed out with a mean, mendacious straw man about toxic progressivism and how only conservatives can stop the “Democrat” Party.

All of which is to say that Fiorina behaved like a Republican and sounded like one. Jindal and Rick Santorum both did about as well, but debates have to have winners, so in the words of Dennis Green, someone wanted to crown her ass – so Fox (and, to be fair, everyone else) crowned her ass. Fox took it a step further, going almost wall-to-wall Fiorina Wins! for the next hour, unsurprisingly resulting in a Fox viewer poll that gave her the debate victory with 83 percent of the total.

But if that was Fiorina’s crowning, what happened in the varsity debate amounted to an attempt at Trump’s deposition. 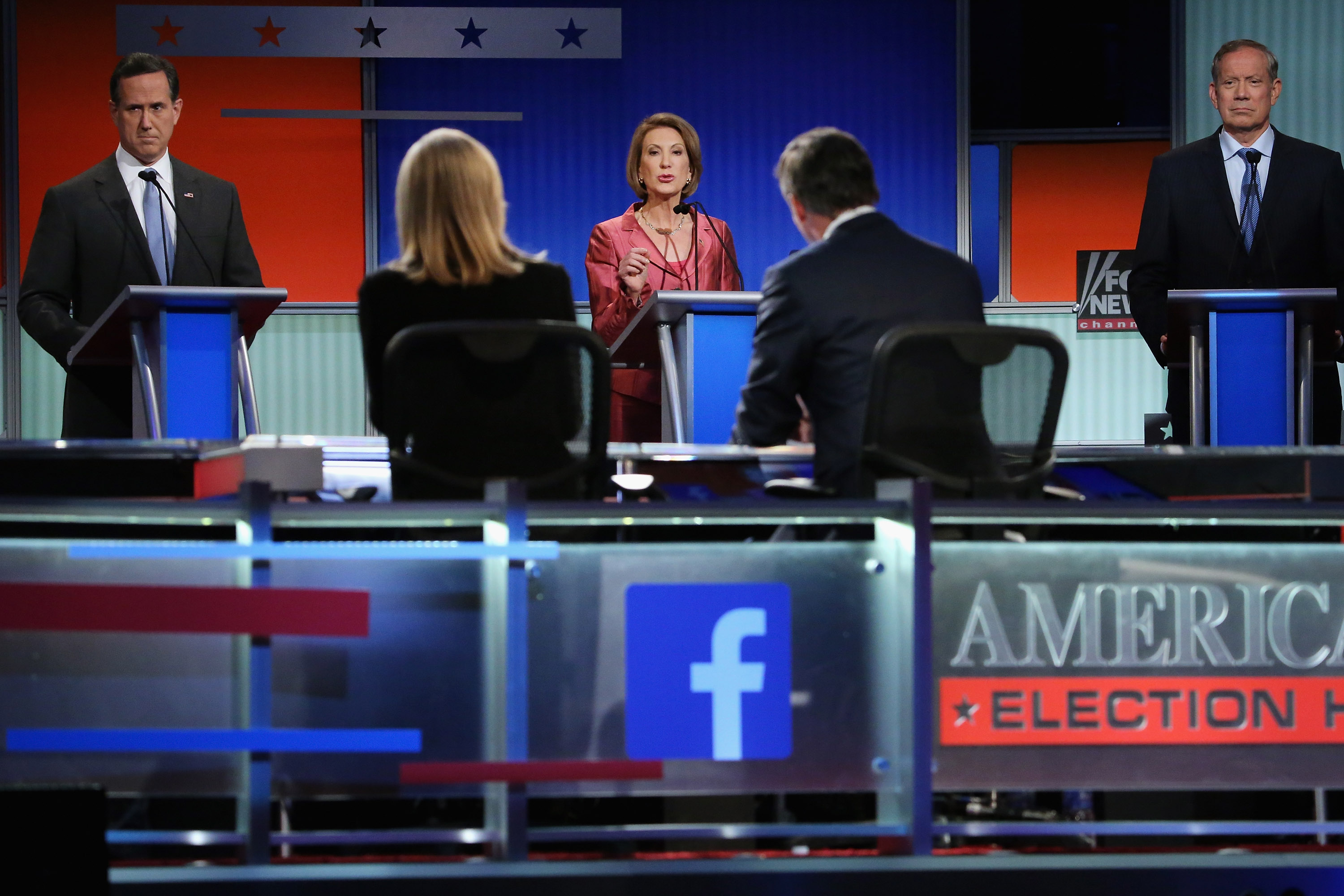 The first question asked was for anyone who refused to pledge to campaign for the eventual Republican nominee to raise their hand. Because the Donald had previously stated his willingness to consider running a third party campaign –aggrieved as he is by attacks from other Republican nominees, all polling beneath him by at least double digits – and because his poll numbers meant he would be placed center-stage, the result was an obvious tableau of loyal party men with their hands down flanking Trump, alone, with his raised.

After that, the Fox panel of Chris Wallace, Megyn Kelly and perpetual Dennis the Menace LARPer Brett Baier went more or less knives out on Trump. Why did he say all these misogynistic things about women? (He parried this with a crack about Rosie O’Donnell, which the audience ate up, because they watch Fox and have been taught to dislike and distrust women.) Where was his proof that Mexico was sending felons across the border? Why had he donated to so many Democrats? Why had he once supported single-payer healthcare? Why did his companies file for bankruptcy so many times?

Granted, Wallace did tick through a series of questions that, shockingly, amounted to asking each candidate to explain why their budgets had failed or why their projected budget policies were estimated to fail – questions the candidates parried with the familiar conservative economic-magicks incantation of nuh-uh. But aside from that, Trump’s treatment was singularly rigorous. In comparison, the questions pitched to Marco Rubio – a sub-replacement level policy slap hitter – amounted to gently granny-tossing beach balls at him while he wielded a double-wide fungo bat. Mr. Burns Marco, your campaign seems to have the momentum of a runaway freight train. Why are you so popular?

In fact, apart from Wallace’s budget questions and all those directed at Trump, the varsity debate seemed structured to provide the least discomfort possible for all candidates. There were no questions about climate change. Voting rights and campaign financing were skipped. The only question from a black viewer asked what the candidates would do to make sure he was safe from threats on his life – from ISIS.

So why the sudden application of reality-based inquiry? It’s not that Trump isn’t saying the right things: Indeed, he’s channeling the low growl of every party prejudice. In the simplest terms, a spanking from Fox News is just about all the party has left.

The feckless, chinless fretting of Republican Party Chairman Reince Priebus isn’t going to get the job done. After the 2012 election, Priebus commissioned an election portmortem that stated that, for the party to survive, it had to stop alienating Latinos and other minorities. Future 2016 candidates paid attention to that for all of maybe two weeks, if they did at all. More recently, Priebus called Trump to personally beg him to “tone it down,” to which, as pretty much everyone has guessed, Trump evidently said something synonymous with, “Go fuck yourself.” 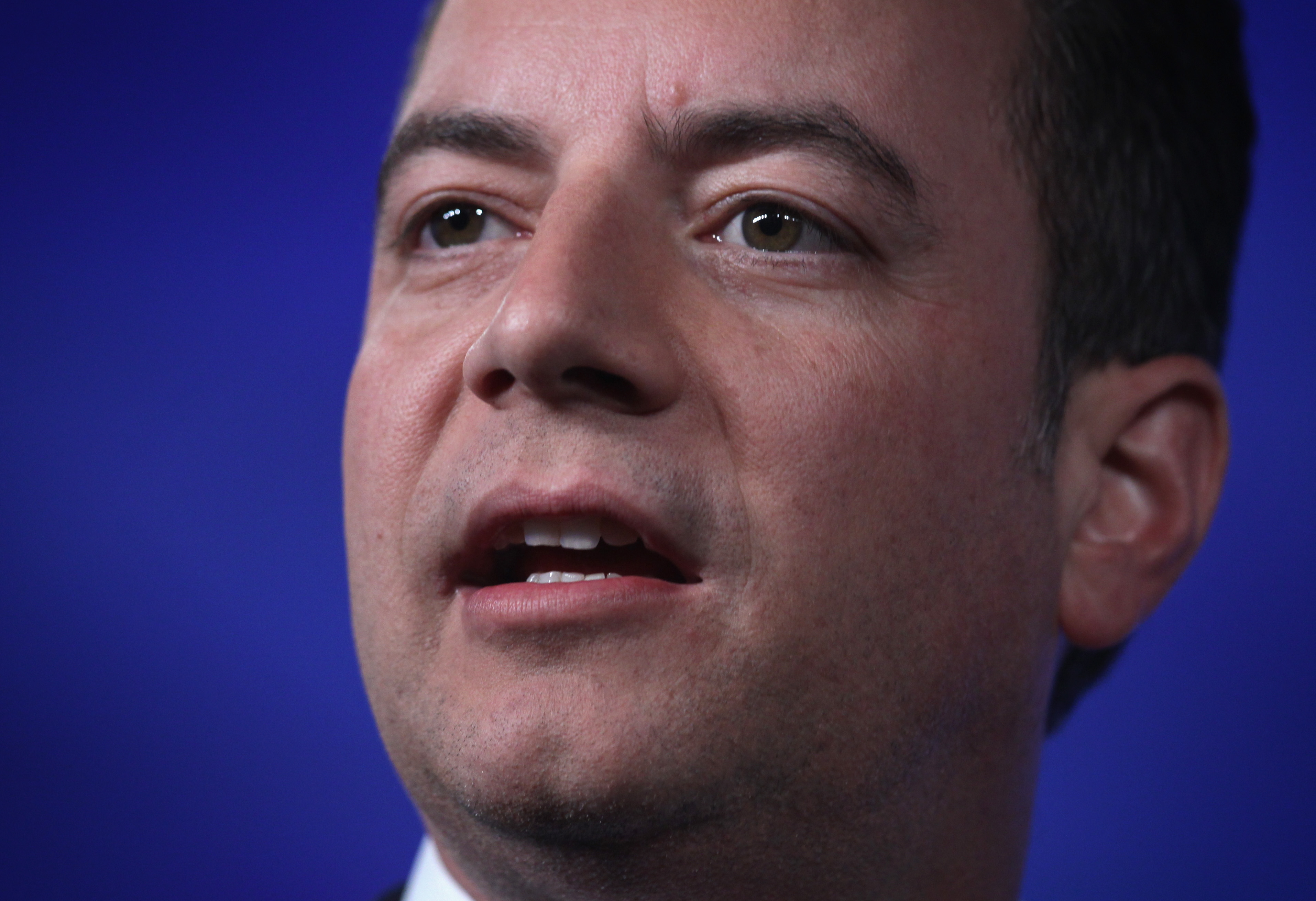 At the same time, however, Fox News was promoting the hell out of Donald Trump, spending June and most of July devoting more coverage to him than any other candidate. Fox Chairman Roger Ailes supposedly thumbed his nose at Rupert Murdoch, had a three-hour private meeting with Trump, demanded that The Five reporter Eric Bolling personally defend Trump at all costs, tasked Fox & Friends hosts with fawning over him the way infants do with things that blink and make noise, and had Fox pollster/analyst Pat Caddell consult with Trump.

If the change in Trump’s treatment signifies anything, it’s either that Murdoch has regained control of one of his own companies or that Ailes has essentially done the menacing dad thing and taken off his belt while muttering, “I brought you into this world, and I can take you out of it.” Any doubt about his intention was dispelled post-debate, when Frank Luntz – a pollster whose analyses-for-hire are as reliably scientifically rigorous and impartial as a Soviet-era focus group on whether “Stalin is great, or really great” – conducted a Fox News focus group that concluded that Trump lost the debate, lost conservatives’ confidence, sucks really bad, and no one likes him.

What else can the Republicans do at this point? Gone are the days when candidates needed to rely on the party machine to spread awareness, churn up money and drive the votes. The institutional infrastructure is increasingly irrelevant because the party labored to make it irrelevant. The erosion of campaign finance restrictions and the victory of Citizens United have resulted in a free-for-all, where people like Jeb Bush can definitely not hire campaign staffers and definitely not coordinate campaign strategy while raising $100 million dollars before formally announcing the campaign they definitely had not decided they were going to run.

Meanwhile, as in 2012 – when Rand Paul had Peter Thiel, Rick Santorum had Foster Friess and Newt Gingrich had Sheldon Adelson – each candidate has a billionaire’s leg to nuzzle up against. Ted Cruz is kept by an alleged tax cheat, and Marco Rubio – a free market champion who spent an interruptive belch of his career in the private sector – is kept along with his wife by a billionaire who has underwritten his career nearly every step of the way.

All of these candidates are now free from any accountability to the party or to actual voters. They can campaign for months at a time, drawing barely over 1 percent in national polls, at the whim of billionaire patrons who will fund their likely doomed expeditions with the expectation of compliance when figuring out which open-ended contracts to issue or regulations to vivisect. Just as in matters of rhetoric, Donald Trump isn’t some manifestation of a new disease but a symptom of an increasingly acute syndrome at the heart of conservatism.

The only difference is, Trump has always had fuck-you money. There is no one to yank the chain and threaten to starve him of funds if he lashes out at other candidates receiving those same billionaires’ checks. There’s no one to bring him to heel when he threatens to run an independent campaign and siphon away Republican votes and let the Democratic nominee take the election in a walk. And he’s taken to pointing this out, scathingly tweeting things like this:

I wish good luck to all of the Republican candidates that traveled to California to beg for money etc. from the Koch Brothers. Puppets?

when most of the major candidates decamped to a Koch brothers retreat to stroke both billionaires in the hopes of getting some of the $900 million they’ve pledged to dump into the 2016 races.

It’s uncomfortable when a serially wrong clownshow like Donald Trump can be unimpeachably correct. It’s downright mortifying when he’s noting that the system is structured in such a way that every candidate is capable of being bought by a single individual, then forced to tailor his or her campaign to exactly one voter out of nearly 300 million. When Donald Trump is the guy on stage with the biggest claim to integrity, you’re fucked. When he’s that guy because the system finally looks the way you fought to make it look, you’ve fucked yourself.

No matter what Frank Luntz said after the debate, you didn’t just see Donald Trump lose it. In another week of polling, it might turn out that he lost nothing at all. What you saw was Fox News sending a message because no one and nothing else can. That wasn’t a debate. That was Donald Trump being told, “Heel, boy.”