Many years ago, while researching a book chapter on health care reform, I visited a hospital in Bayonne, New Jersey that was having problems. Upon arrival, administrators told me a story that summed up everything that is terrible and stupid about American health care.

A patient of theirs suffering from a chronic illness took a bad turn and had to come in for a minor surgical procedure. The only problem was, the patient had been taking Coumadin, a common blood thinner, as part of his outpatient care.

So they brought him in to the hospital, weaned him off the Coumadin, did the surgery successfully, then sent him home. All was well until they billed the insurer. The answer came back: coverage denied, because the operation had not been conducted in “timely fashion.”

Of course, had they operated in a more “timely fashion,” the patient would have bled to death on the operating table. But such is the logic of the American health care system, a Frankenstein’s monster of monopolistic insurance zones peppered with over a thousand different carriers, each with their own (often cruel) procedures and billing systems.

The hospitals I visited all told me they devoted enormous resources – as much as half of all administrative staff, in one case – to chasing claims. Patient care in American is in this way consistently reduced to a ludicrous and irrational negotiation of two competing professional disciplines: medicine, and extracting money from insurance companies.

Patients get trapped between hospitals that overcharge for simple procedures and insurers who deny coverage for serious ones. Administrative costs and profit are two of the bigger factors explaining why Americans spend about twice as much per person or more on health care compared with other industrialized countries, but get consistently worse results.

Ideas like a single-payer system, or ending the antitrust exemption for insurance companies, would be obvious fixes. But when they came up during the Obamacare debate, they were dismissed as politically unfeasible and/or too costly. Because the United States will not do what other countries do as a matter of course – declare health care to be a universal human right and work backward from that premise – we are continually stuck with patchwork political solutions that protect insurance and pharmaceutical company profits while leaving masses of people uninsured.

This is why it’s so interesting to see so many of the opponents of universal health coverage attacking the idiotic Trumpcare bill on moral, rather than financial, grounds. Trumpcare is, like most Republican health care concepts, a depraved and transparent effort at slashing coverage and converting the benefits into tax breaks for rich people. This has resulted in howls of outrage from people who seem to have only just discovered that denying people health care might be bad for their health. 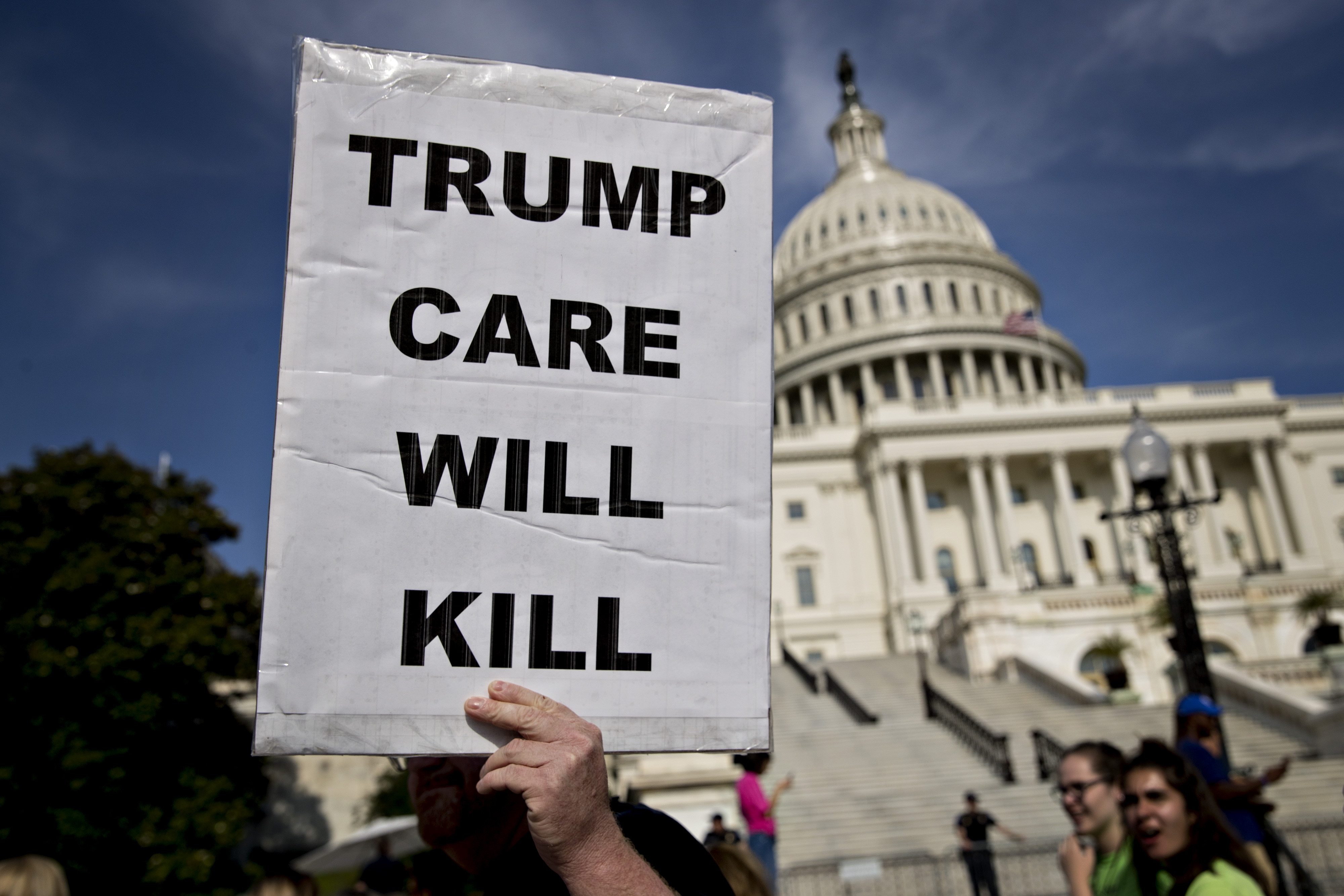 “More than 40 percent of the Senate bill’s tax cuts would go to people with annual incomes over $1 million — but even these lucky few would see their after-tax income rise only by a barely noticeable 2 percent.

“So it’s vast suffering — including, according to the best estimates, around 200,000 preventable deaths — imposed on many of our fellow citizens in order to give a handful of wealthy people what amounts to some extra pocket change.”

This is interesting, because only last year Krugman was telling us we should abandon efforts to seek universal health care and focus “on other issues.” As he put it:

“If we could start from scratch, many, perhaps most, health economists would recommend single-payer, a Medicare-type program covering everyone. But single-payer wasn’t a politically feasible goal in America.”

Krugman then went on to explain that the “incumbent political players” – private insurers, among others – simply had too much power, so it was better to give them something and get some health care than to take something away from them and get nothing.

He also said that additional tax revenue would make a more universal program politically untenable; he said this even as he admitted that such a program would probably reduce costs overall, but countered that “it would be difficult to make that case to the broad public, especially given the chorus of misinformation you know would dominate the airwaves.”

Krugman’s concession to what he called “Realities” meant that it was OK to leave an expected 31 million people uninsured. This was the argument last January, when most pundits and Vegas bookmakers were sure we were looking at four more years of a Democratic White House.

Instead, the monster Trump is in power, and trying to further roll back coverage in a field he surely doesn’t understand through legislation he apparently doesn’t even like. Reports say he has “shown little interest in what’s in the bill,” but that he thought the House version was “mean, mean, mean.”

That doesn’t mean Trump or the Republican Party plans on doing anything substantive to fix their idiotic health care bill. In a scene straight out of Swift or Gogol, Republican Senators were apparently stunned to their cores to discover via the Congressional Budget Office that their steal-from-the-poor, give-to-the-rich mutant of a bill would push 23 million people off the health care rolls.

“It knocked the wind out of all their sails,” a GOP aide told reporters.

While the Republicans scramble to figure out the next step, Democrats continue to hammer the theme that Republicans want to kill their voters. I’m not a big fan of this kind of rhetoric, but I’ll take it if it means the party is having an epiphany about the moral aspects of the health care debate. Surely if pushing some people off health care is killing them, then leaving tens of millions more without care is no better.

Health care is an absolute human right. On a policy level we already recognized this decades ago, during the height of the Reagan era, when the Emergency Medical and Treatment Labor Act made it illegal for public and private hospitals alike to turn patients away in an emergency. There is simply no moral justification for denying aid to a sick or dying person. Any country that does so systematically is not a country at all.

Let’s hope the awful Trump era awakens us to the broader issue. The sad thing is that doing the right thing is also the smart thing. As other countries have already discovered, universal coverage systems that put the right incentives back into health care greatly reduce costs and waste. Getting there isn’t “unrealistic.” It’s necessary, morally and otherwise.