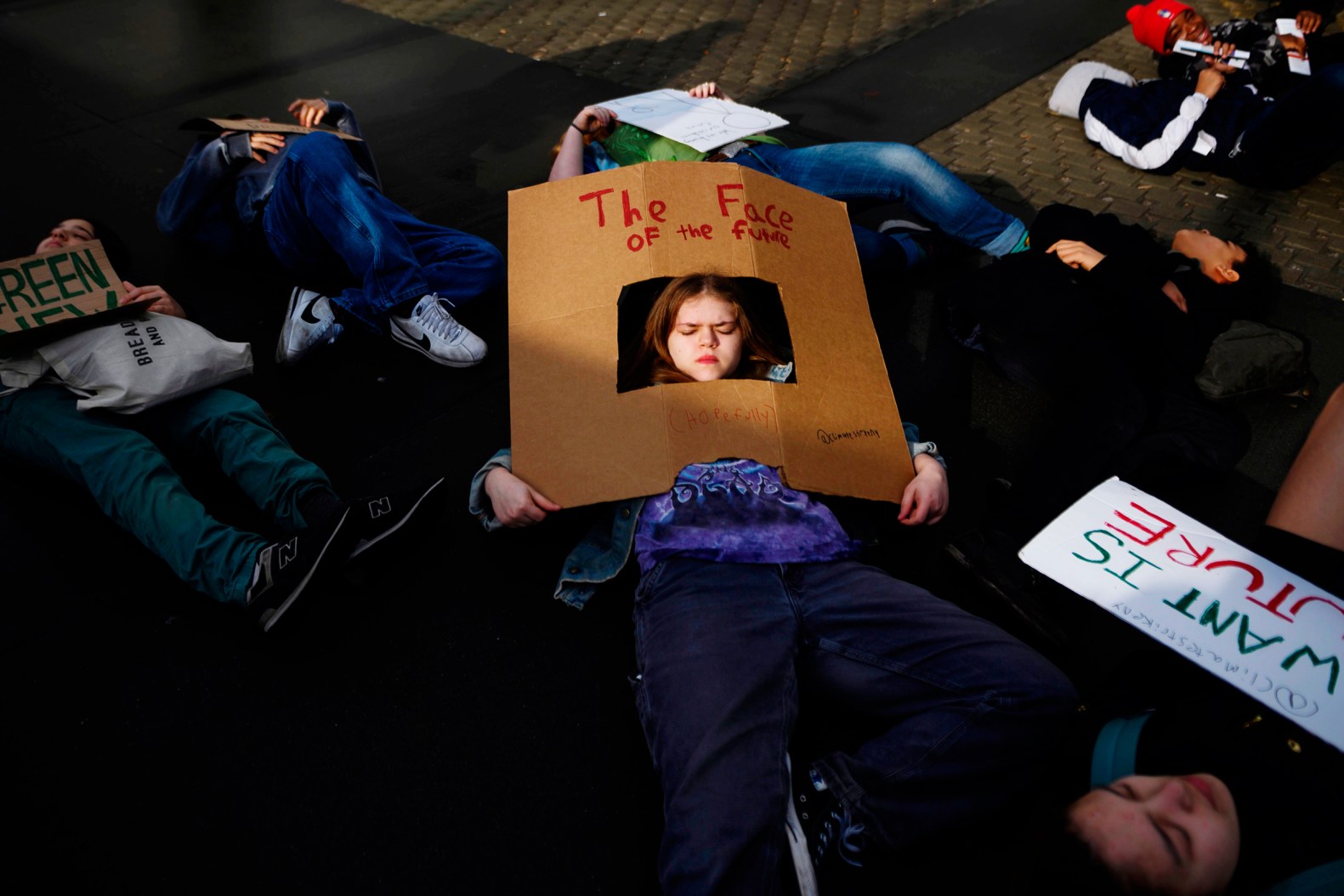 View Gallery
21 photos
School children take part in a die-in during a Youth Climate Strike in front of the New York Headquarters of the United Nations on March 15, 2019. Johannes Eisele/AFP/Getty Images

Last August, when she began her climate strike outside the Swedish parliament, 16-year-old Greta Thunberg was all alone. “I tried to bring people along to join me,” Thunberg recently told Rolling Stone, “but no one was really interested, and so I had to do it by myself.” But around the world, children and teenagers — worried about their future and exasperated by adults’ overwhelming failure to address climate change — soon took notice.

Among them was Alexandria Villaseñor, a 7th grader in New York. Villaseñor, who has asthma, was visiting family in Northern California in November as the Camp Fire consumed thousands of homes and tens of thousands of acres. She couldn’t go outside without feeling “really sick,” she says. When she returned to New York she started reading and researching and discovered that what was happening in California, where she grew up, wasn’t normal.

“I started to realize, ‘Wow, I’ve lived in climate change my whole life’ — my earliest memories were of the droughts,” she says. “Our reservoir dried up one time — where we got our water supply. I just started to realize that I’ve always been around this.” She came across a story about Thunberg, read about the speech she gave at the 2018 United Nations COP24 climate conference in Poland and her call to action.

On December 14th, Villaseñor began striking outside the United Nations headquarters in New York. For many weeks, like Thunberg, she was alone. She returned anyway “every Friday for about four or more hours, or at least until I’m numb. I’ve striked in rain, sleet, freezing snow, even the Polar vortex.”

But, like Thunberg, Villaseñor is determined to make sure world leaders hear the school strikers’ demands. “I want them to enact laws that will reduce greenhouse gas emissions by 50 percent and keep us below 1.5 degrees [warming], in line with the IPCC report that came out last November,” she says. “I will be striking as long as it takes for those goals to be enacted.”

On Friday, Villaseñor returned to the polished steel bench where she’s sat for the past 14 weeks, a few hundred feet from the entrance of the United Nations headquarters. Flanked by the two plastic covered signs she’s carried every week — “COP24 FAILED US,” one reads; the other says “School Strike 4 CLIMATE” — she read from a set of prepared remarks.

“For weeks, I was alone and ignored, receiving barely a nod or a glance from people passing by me,” Villaseñor said. On Friday though, she was joined by dozens of other children her age, who came that morning ready to stage a die-in on the steps of the U.N. to get world leaders’ attention. “But they are still not listening,” she said. “Instead, our world leaders are the ones acting like children. They are the ones having tantrums, arguing with each other and refusing to take responsibility for their actions, while the planet burns.”

More than 400 protest actions were planned in the U.S. on Friday, according to organizers Youth Climate Strike, and the event at the United Nations was the first of several planned in New York. Jay Inslee, governor of Washington and a Democratic candidate for president, was scheduled to speak at an event at Columbia University. Villaseñor expected to meet with him, but she was suspicious of politicians looking to use her and her fellow activists for a photo op.

“I don’t want to get involved until I know what their exact plans are. I want to know what they are thinking of doing to reverse the climate crisis,” Villaseñor says. “[17-year-old] Jamie Margolin had sued Jay Inslee for not taking action on climate change, so I’m very cautious to get involved with any politicians because they could be making false promises.”