Cartoons Are Worth Fighting For - Rolling Stone
×
×

An unspeakable tragedy in Paris has given birth to a secondary censorship controversy here at home.

It was predictable that the savage attack on the French satire newspaper Charlie Hebdo would inspire a crisis of confidence in the American/Western media: what to do about the “forbidden” images?

The news story had a clear narrative, about a bunch of cartoonists and humorists who were viciously murdered by radicals for publishing images of the Prophet Muhammad.

Since the attacks, consumers of Western news media have been showered with images of the appalling violence, which left 12 dead.

Yet in a business where the first, second and third question in the reporting of almost every news story is, “Can we get the art?” (images are commonly called “the art” in journalism), virtually no Western news outlet published “the art.”

The few exceptions were new-media icons like The Huffington Post and Buzzfeed. Older, legacy outlets like the New York Times, the Washington Post, CNN, and the Associated Press almost all turtled when faced with the decision of whether or not to print the offending cartoons.

In a world dominated by image journalism, we suddenly became lovers of letters again, satisfied that verbal descriptions are enough to convey the gist of the story. Here’s how the New York Times explained its decision (emphasis mine):

Under Times standards, we do not normally publish images or other material deliberately intended to offend religious sensibilities. After careful consideration, Times editors decided that describing the cartoons in question would give readers sufficient information to understand today’s story.

Right, because who needs pictures when you can just describe the thing? Imagine if news outlets collectively decided to only verbally describe the events of 9/11? (Ironically, the attack would have had significantly less impact, been less of a boon for terrorist recruiting worldwide, had they done that). Here’s how the AP described its decision re: the Hebdo cartoons:

We’ve taken the view that we don’t want to publish hate speech or spectacles that offend, provoke or intimidate, or anything that desecrates religious symbols or angers people along religious or ethnic lines…We don’t feel that’s useful.

Almost immediately after these outlets offered these explanations, conservative commentators here in the States complained, I think with some justice, about a double-standard. They asked, how come we don’t always show the same restraint with other religions?

These complaints immediately thrust us way back in time, to the late Eighties, back to the pre-Internet days when large numbers of Americans were capable of being shocked by artists like Robert Mapplethorpe and Andres Serrano. The latter’s Piss Christ, a set piece of a crucifix submerged in the artist’s own urine, caused Serrano to receive death threats back in the day. The piece was ultimately vandalized by angry Catholic activists. 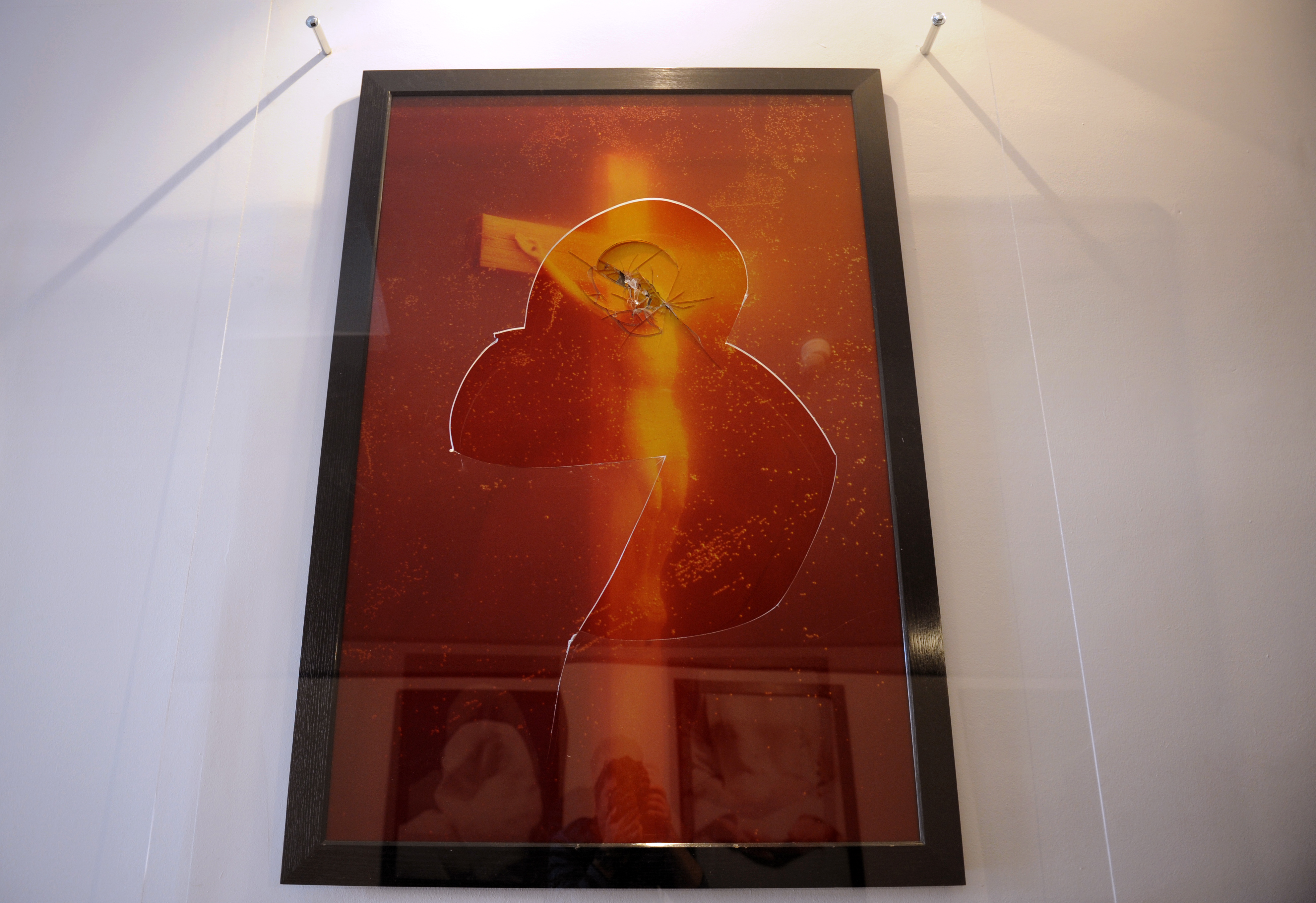 Recalling all of that, conservative outlets now asked those mainstream news organizations: if you don’t publish images that are deliberately offensive to religions, then how come you’ve got pictures of Piss Christ in your archives?

The Washington Examiner ran a story entitled, “Associated Press censored Muhammad cartoons while selling ‘Piss Christ.'” Noting that the AP had said it had a policy of refraining from “moving deliberately provocative images,” it wrote:

But in case you want to admire the “work of art” from three decades ago that consisted of a photograph of a crucifix in a vat of the photographer’s urine, the AP will sell it to you.

Subsequently, Breitbart.com took aim at CNN in a piece entitled, “CNN Policy: Charlie Hebdo Muhammad Cartoons Forbidden, ‘Piss Christ’ Okay.” The piece noted that CNN had only just this past October run a listicle called “10 Works of Art that Shocked the World” that contained a picture of Serrano’s oddly humdrum Christ-in-urine.

So what happened next? Surprisngly, the AP yanked its pictures of Piss Christ. One imagines that other moves like this may be coming. Breitbart.com has already made derisive note of the AP’s archiving of another artwork, this one involving “The Holy Virgin Mary,” the famed Giuliani-despised item that was once in the Brooklyn museum, depicting a Madonna decorated with elephant feces.

The Examiner and Breitbart pieces were interestingly non-committal about what they wanted outlets like CNN and the AP to do. Did they want them to fix the double-standard by yanking the Christian-offending material, or did they want them to leave both images up, i.e. publish the Hebdo cartoons and Piss Christ?

I asked Timothy Carney, author of the Examiner piece, who unhesitatingly responded: “Definitely should’ve left them both up!”

No comment yet from Brietbart, and I couldn’t find any editorials there embracing the sacred right, in Western culture, to be dumbly offensive in print (not surprising to me, since Breitbart‘s followers once harassed and threatened me at length after my own infamous obit of their site’s namesake).

Anyway, the AP blew this one. Now a secondary result of the Hebdo bombings has been a move by our society to censor itself in ways it wasn’t willing to before the attacks.

Beyond all of that, the publish-or-not issue is a controversy only an intellectual could talk himself into. There’s been talk, both before the Hebdo attacks and since, that the cartoons were “silly provocations” (this was Le Figaro’s pre-attack judgment) and that other similar satires were just so much “oil on the fire” (this was what French foreign minister Laurent Fabius said, also prior to the attack).

The implication is that, yes, we have a right to be offensive, but let’s not be offensive this time, maybe just this once, because — and this is the part that’s usually not said out loud — this particular group of satire targets is more than unusually violent and nuts and struggles more even than the average fundamentalist on the sense of humor front.

That point of view is a gross and shameful capitulation. I’m against easing back on the offensive cartoons “just this once” for the same reason I don’t believe in fighting al-Qaeda by “temporarily” tossing out habeas corpus and committing acts of torture: you lose in advance when you give up your culture.

Free speech is a crucial part of who we are. If we give it up because a vocal minority in a different culture disagrees — a minority, incidentally that believes we had things figured better in the seventh century — then we don’t deserve free speech at all. And yes, it sucks that we have to risk bloodshed and destruction over a cartoon, but that’s what’s on the line here, our way of life.

The answer here isn’t more self-censorship, but standing on the principle of everyone learning to calm down, get a life, and tolerate the occasional weird idea. This is particularly true when the only places these ideas are “displayed” are on Internet servers, where you have to go looking for them to find them. We’re really going to run even from that? Since when do we give in to bullies so easily?